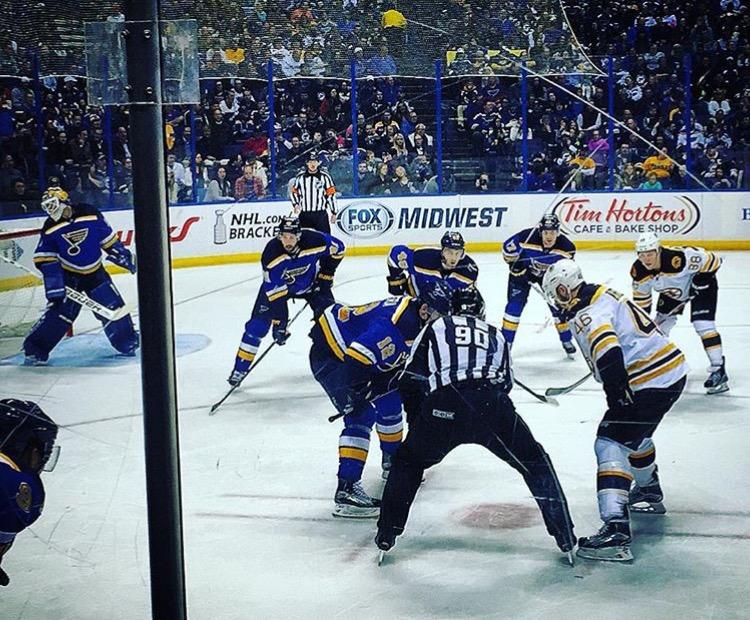 The St. Louis Blues face off against the Boston Bruins April 1, 2016 at the Scottrade Center. (Printed with permission by Chris Bosche)

As many sports fans across the Lou know, the St. Louis Blues recently fired their head coach after 6 NHL seasons with the Blues. Ken Hitchcock had not produced adequate results for the team and was supposedly disliked by some of the players.

Being a die-hard hockey fan, I believe that this was a good change for the team. Growing up watching the team, I have seen good coaches for the team and bad ones. I feel that Hitchcock was a good coach for his first couple of years but in recent seasons, he has made some decisions with who starts the game and who is on what line that I don’t agree with.

Since Hitchcock has joined the Blues in 2011, they have played a total of 413 games, of these, the Blues lost 124. Coach Joel Quenneville (STL coach from 1997- 2004) coached a total of 593 games in St. Louis and only lost 191. This means that even though he coache 180 more games than Hitchcock, he only lost 67 more games. Ultimately, this losses gap should have been larger proving that Hitchcock was not the best leader for the team.

Jan 1st to Jan 31st, the Blues have played 13 games with a losing record of 5-8 and are ranked fourth in the Western Conference.

As playoffs are approaching, NHL teams should be winning as many games as possible in order to rank well.

The Blues placed in either  first or second place in the Western Conference for Hitchcock’s 4 full NHL seasons. This season, they are breaking the tradition. I personally place the blame on Hitchcock and his coaching strategies.

Coach Mike Yeo took over for Hitchcock and has coached 3 games for the Blues and is holding a 2-1 wins and loss record. One of which ended with a score of 5-1 (blues win) against the Toronto Maple Leaves. This is already a positive change to the losing streak Hitchcock and the Blues have been facing.

In the end, no one can tell what will happen for the Blues in the future; however, I think that the Blues will ultimately improve and maybe even win the Stanley Cup in the near future. It was time for a new change in the coaching staff.