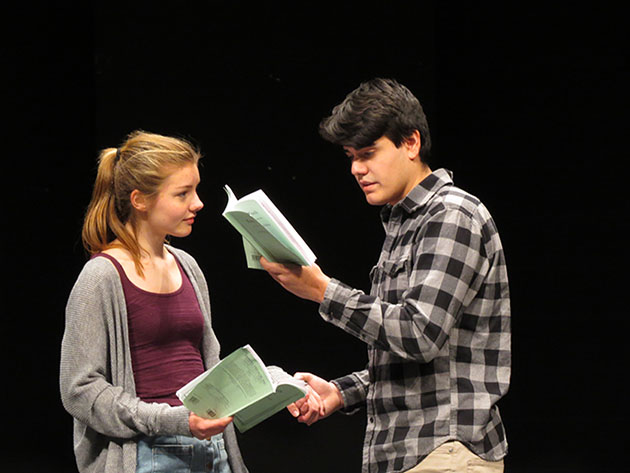 Kristen Gollwitzer, freshman, and Sadoth Gonzalez, senior, rehearse their lines in preparation for the spring play.

“I knew that in the fall I was going to be doing a huge production with Bye Bye Birdie and it had a lot of kids in it and when I thought about a contrasting show, I definitely wanted to do something smaller and not quite as huge of a production,” Blindauer said.

Fools tells the story of a Russian town in which the entire population is made up of fools due to a 200 year old curse that can only be broken if an outsider teaches a town member something new. When Moscow professor Leon Steponovitch Tolchinsky, played by Sadoth Gonzalez, senior, sees an advertisement to teach a young lady named Sophia Irena Elenya Zubritsky from the town he takes the chance and ends up falling for her.

“The script is really funny and the characters are really interesting and I really like the cast. It’s going to be a fun show,” Gonzalez said.

The lines consist of several exchanges between Tolchinsky and the members of the town.

“All those interactions are really cool and I get to react to all these big characters so it’s fun,” Gonzalez said. “With a small cast it’s more up to the individual to come up with their own character and sort of grow into their character.”

Out of the over 40 people that auditioned, the cast was cut down to just 10 people, small compared to the 30 that were in Bye Bye Birdie.

“Everyone is kind of funny, and since they are supposed to act like they’re stupid all those interactions are pretty cool, but I get to react to those things and it’s a lot of fun,” Gonzalez said

Backstage, the crew works to literally set the scene and put the play in its correct time frame, late 19th century Russia.

“A lot of people who didn’t get casted are on crew so it’s fun because everybody knows everybody and is really welcoming to the newcomers,” costume crew member Kelley Barr, senior, said.

This part of the crew focuses on seeing what costumes are needed in order to put the play in its proper time period.

For associate director Justin Spurgeon, social studies teacher, it is most important for the students to understand the humor of the play.

“The show itself is hilarious, his [Neil Simon’s] words bring about the humor to the production, and to have the students translate that could be an uphill battle, but I’m pretty sure our entire cast will understand the humor and will deliver it perfectly,” he said.

Opening night is set for Thursday, March 31, and the show will run through Saturday, April 2.