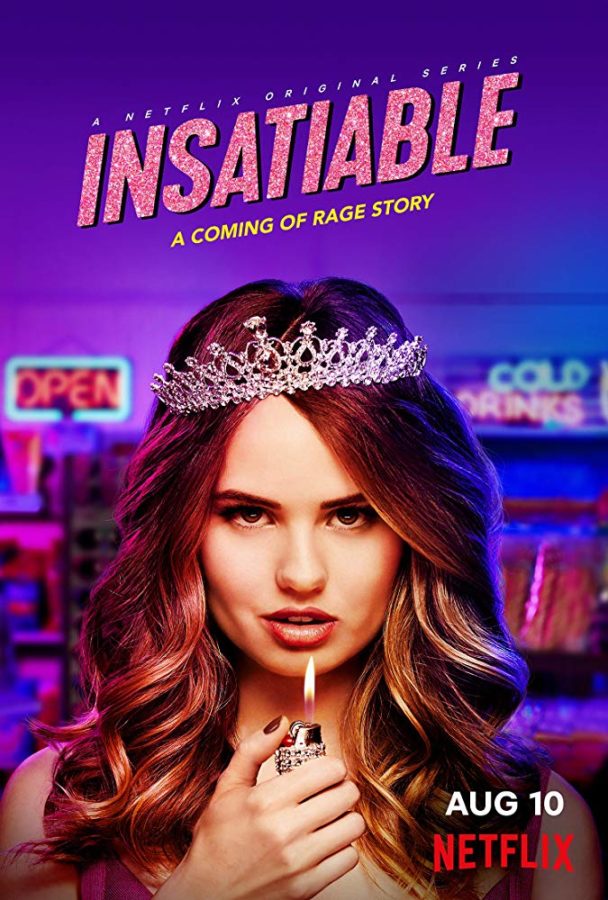 Controversy. Scandal. A lot of weirdness.

Insatiable is one of the new additions to the Netflix Original Series, an edition that  brought many debates and controversies before it was even released. After watching, I completely understand why.

The story follows Patty (Debby Ryan), an overweight high schooler, who is punched by a homeless man and then must have her mouth wired-shut to fix her broken jaw. In the time that she is on a liquid diet through her wired jaw, she loses all the weight and becomes skinny.

After losing the weight, Patty, with the help of her newly found beauty pageant coach (Dallas Roberts), sets out to get revenge on the people who teased her while she was fat. She also is on a mission to win beauty pageants with her newfound “attractiveness.”

This portrayal of conforming to society’s expectations is demeaning and wrong. Are we trying to teach young people that if they are overweight they will never be able to have the power over their life? That they have to conform to society’s ideals of beauty in order to stand up to bullies or to be in beauty pageants or fulfill any other dream they have for that matter.

Not only was this offensive and just overall a terrible decision by the show’s writing team, but they also decided it would be a great show by including satire that doesn’t come across as so. The jokes and scenes that are included in the show such as the homophobic/racist/rich, white male businessman or the awkward and uncomfortable sexual interactions between minors and adults are sickening. These did not come across as “jokes” but more as a serious aspect of the show that I and many others didn’t appreciate.

I urge anyone reading this review to not watch this TV show. It doesn’t deserve the views and the revenue that it would get from it.

And to those of you who saw the show or feel as though your body isn’t good enough. You are wrong. You are beautiful and wonderful just the way you are. You have the power to be anything you want to be, no matter what your body looks like.

So Netflix, maybe next time you create a show, let’s empower those who don’t feel comfortable in their body types. Show them they have the ability to do all things regardless if they are “fat,” “skinny” or anywhere in between.