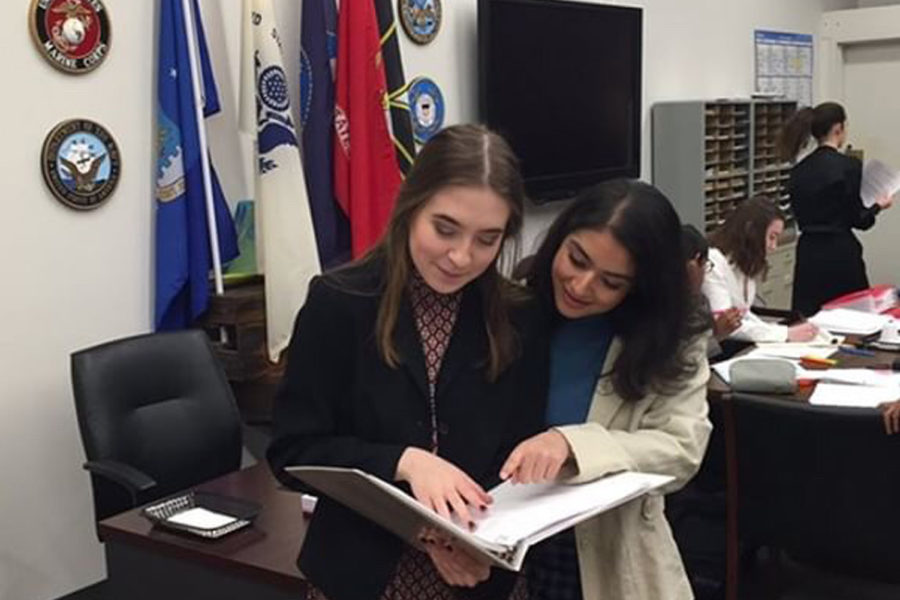 Zara Abbassi and Madelyn Berzon, seniors, competed at Mock Trials at the St. Louis County Circuit Courts Building. The team made it to Regionals and will not be advancing to State.

Out of three MHS Mock Trial teams, one team pondered over this question as they competed at Regionals.

Teams of seven members competed against each other at the Regional competition in both prosecution and defense, which took place on March 12 and March 14. Although MHS will not be advancing to State, they were 1 out of 16 teams to make it to and compete at Regionals.

Andrew Ogden, junior, said Mock Trial gives students the opportunity to be creative, tell stories and have fun while competing. Ogden said the varsity team this year is very strong and experienced.

“A lot of people may think to act really strict in a courtroom, but it’s more of like how you would act and be calm towards your grandma,” Ogden said. “The atmosphere is a lot more fun than any other speaking event I’ve done at our school.”

At Regionals, they were presented with a case that centered around a movie props manager who handed an actor a gun with real bullets for a shooting scene. Ogden said the defense is arguing the manager didn’t have a motive, while the prosecution is proving that the manager demonstrated obsessive traits towards one of the celebrities.

“We’re a lot more critical with each other because it’s all about thinking of what the other side may say,” Abbassi said.

Abbassi said one factor that helped contribute to their successes this year is the system of three MHS Mock Trial teams, which allowed for the teams to collaborate.

“We were all able to help each other,” Abbassi said. “If one team was prosecution for the competition and the other was defense, then we could work together to get ready for the next trial.”

Abbassi enjoys competing in Mock Trial because it has allowed her to learn how the justice system works. She is interested in attending law school in the future and has gained exposure to the field through Mock Trial.

“I really like being in the courtroom and being able to analyze a case from different perspectives,” Abbassi said. “It’s also really fun to be cross-examined and it makes you think on your feet.”

Thomas Puetz, Mock Trial sponsor, said the access to technology through Chromebooks and the Google Team Drive has maximized both the teams’ efficiency and has helped contribute to their successes thus far.

“I am able to go in and make suggestions on a line of questioning for students as they prepare,” Puetz said. “It’s been a game changer.”

This year, Puetz said the team has had great cohesion. He said students in both the roles of witnesses and lawyers have stepped up their game and have shown impressive growth.

“Our team presidents have done a fantastic job of keeping our teams organized and focused,” Puetz said. “I am very proud of everyone.”