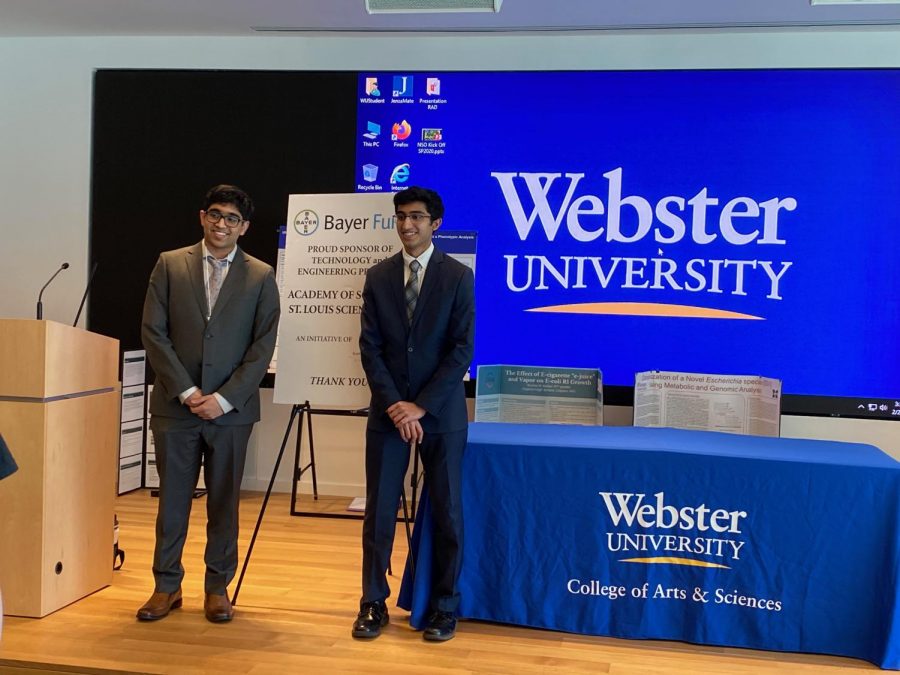 Juniors Prateek Gautam and Rincon Jagarlamudi won first and second place, respectively, at the Honors Division St. Louis Science Fair held at Webster University by the Academy of Science. The fair presents high school students who have completed collegiate-level research with the opportunity to compete and present their research to field professionals.

Gautam and Jagarlamudi, the top two student winners, will represent the Academy of Science and compete at the Intel International Science and Engineering Fair from May 10 to 15.

Gautam said he was surprised when he learned he had won first place because of all of the incredible projects he saw at the science fair.

In the waiting room at the science fair, Gautam said he had the opportunity to interact with other students from various schools and to learn about the scientific pursuits of many young researchers.

“I definitely do see STEM as part of my future because it’s always interested me,” Gautam said. “Doing well here gives a sense of validation that I am on the right path and I could do well in this field in the future.”

Gautam’s project that won a $3,000 scholarship and an all-expenses-paid trip to the ISEF competition was titled “A Machine Learning Approach to Identify Socio-economic Factors Responsible for Patients Dropping out of Substance Abuse Treatment.”

“I think the hardest part was sifting through all the previous research papers and data to see how I could make the project the best possible and what aspects I could incorporate into the project,” Gautam said.

Jagarlamudi said he cherished the opportunity to present his research to high-level professionals within their respective fields.

Through the science fair, he was not only able to learn how to properly communicate his results, but also develop research skills and immerse himself within a community of inspiring and innovative young scholars.

“The children we engage in science and technology today are the critical thinkers and problem solvers of the future.”

“It was a rewarding experience because I put in a lot of time in this project for the past two years,” Jagarlamudi said. “I was also really excited to hear that Prateek won because we are both friends and it’s really great that both of us from the same school are going to the ISEF competition.”

Although Jagarlamudi has not narrowed down what field of science he aims to pursue in the future, he said that research will undoubtedly play a big role in his future studies.

Jagarlamudi’s project, titled “Utilization of a Novel Method of RNA Interference in the Model Organism C. Elegans to Conduct a Genetic Analysis of Aging,” won him a $2,000 Scholarship in addition to an all-expense-paid trip to the ISEF competition.

Initially, Jagarlamudi only planned to take half a year to finish his project, but it ultimately ended up requiring almost two years’ worth of research efforts.

“Lots of the problems with my project were due to the fact that my project involved bacteria, and sometimes, living organisms don’t work the way you want them to,” Jagarlamudi said. “It took a lot of experimentation, but in the end, I’m happy because it turned out well.”

Peggy Nacke, special projects/events director of The Academy of Science – St. Louis said the organization seeks to advance public understanding of science and promote interest in the sciences to students and adults through accessible, year-round seminars and educational initiatives.

“The St. Louis region is a brain trust of researchers, investigators, explorers and science advocates-dedicated to fostering the next generation of STEM Leaders,” Nacke said. “The children we engage in science and technology today are the critical thinkers and problem solvers of the future.”