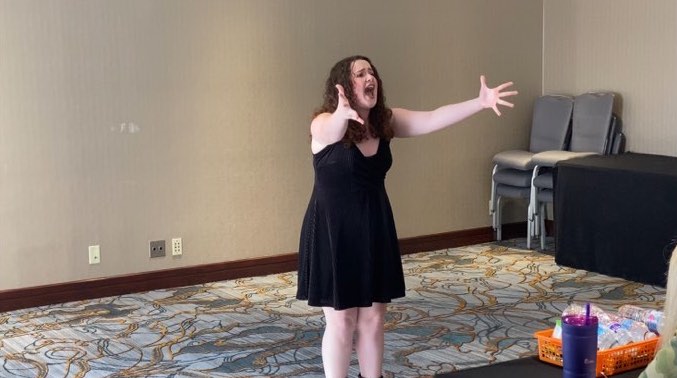 Claire Schmitz, senior, earned a superior rating for her performance of “Dead Mom” from the musical “Beetlejuice” at the Missouri Thespian State Conference.

But she wasn’t sad—she was crying tears of joy.

Schmitz had just earned a superior rating for her performance of “Dead Mom” from the musical “Beetlejuice” at the Missouri Thespian State Conference.

The conference was hosted at the Kansas City Marriott Downtown in Kansas City, Mo., Jan. 9 – Jan. 11.

“We were all sitting in the big auditorium of the conference,” Schmitz said. “I was already so anxious about it, I immediately started bawling my eyes out because I was so happy.”

Schmitz said being competitively judged was a positive experience because it served a learning opportunity to help guide her in future auditions.

“I’ve been putting blood, sweat and tears into practicing the song and it came out with a great result,” Schmitz said. “One of my favorite parts of this whole experience was all of the support I received from those around me. Getting judged on one’s abilities is scary and I was very vulnerable up there, so it was a great learning experience.”

“The State Conference is among one of my favorite experiences in theatre and it is always something I always look forward to,” Schmitz said. “I have met some of my lifelong friends through theatre.”

Fenton said she was shocked and happy when her group received a superior rating.

“We kind of pulled everything together at the last minute, so I was just really excited and I was screaming and jumping up and down,” Fenton said.

I learned that it takes a lot of teamwork and hard work and dedication and time to put an act together.”

Fenton said her group practiced during Flex Time throughout the school year. Additionally, they dedicated days over Winter Break to rehearse the performance together.

“I just thought it was really fun to be able to perform in a more serious setting and receive feedback from a different perspective,” Fenton said. “I learned that it takes a lot of teamwork and hard work and dedication and time to put an act together.”

Rebecca Blindauer, Marquette Theatre Company (MTC) adviser, said to prepare for the competition, the students who planned to compete performed for her ahead of time in order to receive feedback and improve their acts.

“On Wednesday night, we got together and worked through each performance to fine-tune everything,” Blindauer said. “Having seen them the night before, I knew we were in really good shape so it was exciting to see that the judges also thought they were doing a good job.”

Blindauer said she enjoys seeing her students grow throughout the years, not only through competitive events, but also through taking advantage of unique opportunities in the theatre program. She is excited for the students to have the experience of directing shows such as the One Acts and seeing their ideas come to life.

“I just adore the kids who are a part of the theater program here,” Blindauer said. “Getting to see them flourish with this shared love of theater that we all have is just really special and I love being a part of it.”