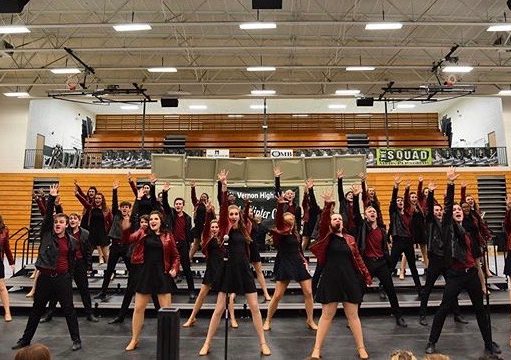 “From here, we want to continue to work on cleaning our set and making it the best that we possibly can perform, so we can give our best show and potentially achieve a Grand Championship,” Ambler said.

Ambler said she works as the co-makeup and hair captain, so she is in charge of getting all the girls ready and prepared to perform.

“Part of my job is getting our group to a state where we can perform comfortably and feel confident while up on stage,” Ambler said. “When it comes down to it, we’re all just a really big family. I really love everyone in the group and it’s so exciting to be in the midst of our group’s positive energy.”

I really love everyone in the group and it’s so exciting to be in the midst of our group’s positive energy.”

Zach Ernstrom, junior, said he enjoyed warming up together before finals and working together to improve based on the advice the team received from clinicians.

“I’ve sung for my church choir, so I was like ‘why not try out?’” Ernstrom said. “I had never danced before, but I ended up making the team and have since made great friends and new memories.”

Jason Winter, Center Stage director, said he was excited once he heard the team is heading toward finals. It is always one of the goals Center Stage strives for each season.

“I was really proud of the kids for how hard they’ve been working to accomplish this so early in the season,” Winter said.

Winter said the team began to focus on learning the show in October and worked up until the beginning of January to get the dances and vocals together. Additionally, the team works with the band and learns from clinicians to get another perspective on ways to improve.

As the director, Winter said the most rewarding aspect of his role is seeing students overcome obstacles.

“It’s as important for us to be great performers as it is for us to be good people at our competitions,” Winter said. “Moving forward, our team will continue to try and be the best versions of ourselves.”