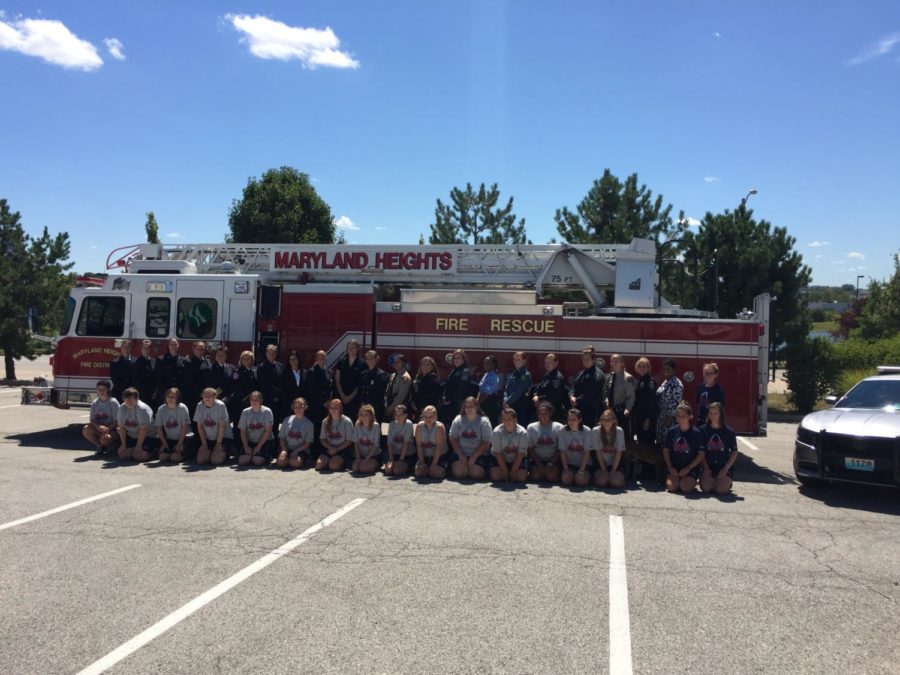 Campers, counselors, and first responders line up in front of a fire truck at the 2017 Camp Fury STL graduation.

Sleeping in a cabin tucked deep in the woods at night but doing real life first responder drills and training during the day.

Emma Radel, junior, was one of 15 girls who attended Camp Fury STL this past summer. Camp Fury is a camp for girls who want to become firefighters, paramedics, police officers, forensic investigators or any other profession in the fire, EMS and law enforcement fields.

“I want to be a fire-medic, a firefighter paramedic,” Radel said. “My grandpa found out through coworkers at Hazelwood Fire Department about [Camp Fury] and the female firefighters talked to me [about it].”

“My favorite part was the obstacle course at the police and fire academy [and] all the teamwork involved to get everyone over all of it,” Radel said. “I would recommend camp fury because it shows you that you are tougher than you originally thought and helps bring women into first responders workforce.”

Camp Fury originated in Southern Arizona in 2008 and only last year was the first Camp Fury STL. The Arizona branch was originally created to help girls find their footing in a male-dominated field. Gina Anderson and Katie Wiegand decided it was time to bring the camp here to St. Louis making it the 8th camp in the US.

“I got involved because being a female first responder, I know that there needs to be more awareness that we exist in male dominated careers and that this is a career choice worth pursuing as a young female,”  Katie Wiegand, co-founder of Camp Fury, said.

Wiegand is currently a firefighter/paramedic for Metro West Fire Protection District and she has known she wants to be a first responder since a young age.

“My dad the chief-of-police in Eureka and I knew I was interested in being a first responder, but not necessarily police work,” Wiegand said, “Occasionally, my dad would go to EMS calls and I rode with him. I can remember going to a seizure call at one of our neighbors. We heard it go out on the scanner/ radio and responded from home when I was 12. I helped move furniture and put a pillow under the man’s head. I then held the door for the fire/medics and I thought it was the coolest thing ever. As soon as I was old enough, I signed up as an Explorer.”

As a female in the first responder field, Wiegand knows first hand what it is like to be a girl in industry.

“For me, being a girl in the firehouse is like being the ‘little sister.’ They give me trouble just like one of the boys. They are protective but know that I can hold my own too…They learn a lot daily,” Wiegand said.

Gina Anderson, currently a firefighter/paramedic for Fenton Fire District, has a similar take on the topic.

“In 2003 while I was a volunteer at Valley Park Fire District. I entered my first house fire and knew it was what I wanted to do as a career. I had already become a paramedic at that point and always knew I wanted to take care of people. Firefighting just added to me being able to help in a different way,” Anderson said. “It can be intimidating at times but overall it is great. You work with mainly males.  As long as you can prove that you can do the job, all of your brothers in the field will have your back.”

During the camp, girls learn many different skills. They climb a 75-foot ladder, repel down a 5-story building, do  target practice on the Virtra firearms simulator, and test drugs in the crime lab. Overall, the girls learned that they have role models looking out for them in the business and that they can do anything.

“Girls were scared of completing some tasks, but they all did each of them. This kind of risk taking proves to them that they can pursue their dreams and they can overcome obstacles,” Wiegand said. “When they entered the camp on day 1 they were all strangers, when they left at the end of the week, they were all like family. That is a major part of the first responder community, we are all a family. So it was good for them to get that ‘team’ feeling.”

Heather Herbold, firefighter/paramedic, was one of the many first responders who attended the camp to help encourage girls in the first responder field.

“The camp was well organized and so much fun,” Herbold said. “The girls learned themselves as did the mentors. New experiences were had, personal limits were tested and overcome, and friendships were forged. It was the best week ever!”

Last year, the camp only consisted of 15 girls but this year, the hope is to expand. There is even a new addition to the camp this year. “Catching Fury” will be a smaller version of Camp Fury and it is intended for girls 11-13.

“Advice that I would give prospective female first responders, or anyone really, is to work hard and never quit. I don’t believe in ‘failing’ because if you are passionate about something you will never quit trying,” Wiegand said.