Movie Review: The Mountain Between Us 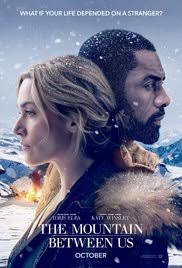 You’re stranded. You get on a plane and ship off to your desired location. Next thing you know, you wake up and you realize that you have been dumped into snow covered mountain and you have no way of getting help.

It’s a common  question: If you were stranded somewhere what would you bring with you?

Well in the new movie “The Mountain Between Us” the main characters Ben (Idris Elba) and Alex (Kate Winslet) had no time to prepare for their strange adventure. They were both in need of getting to very important events in a quick amount of time. Their original flights get cancelled and when a small, two person plane is able to take them, they jump at the chance.

During the flight, the pilot becomes very ill and ultimately loses control of the plane and crashes it into the snowy mountains in the middle of who-knows-where. Ben wakes up to realize that the pilot is dead and the stranger he has travelled with is clinging to life. The pilot’s dog is also on the flight and is somehow unharmed.

The two ultimately have to find a way to get help even when they have no hope.

This movie was sort of let down for me. It was categorized as a “thriller,” yet I found it to not be very action packed. It was very thrilling in the beginning with the plane crash, Ben almost falling of the cliff, and Alex almost being eaten by a mountain lion; but after these events, there were only a few other “jaw-dropping” moments.

I also found that the dog in the film was a little over played. The only justification that I can reason is that it keeps the audience wondering whether the dog will die or not and keeps them interested in the film. I’m not complaining because the dog was adorable, but his character is a little irrelevant.

If you really enjoy watching people walk through snow, you will greatly enjoy this movie. The majority of this film is just watching the two characters slip in slide through snow while they talk about no food, no help, or the imminent idea of dying.

I really wish that there was more interesting scenes that would have made me worried about what would happen next. The whole film just seemed like the ending would be fine and so I found it kind of boring.

I will admit that I enjoyed the beautiful scenery that was included in the film. The snowy mountains were breathtaking and great to look it (but should have been in smaller doses).

Moral of the story: when making a thriller movie, make sure it is actually thrilling.

Movie Review: The Mountain Between Us