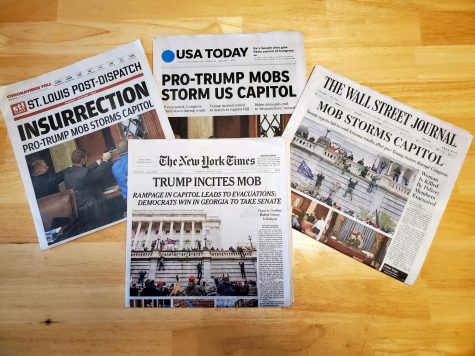 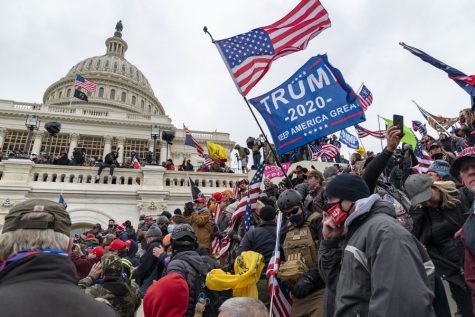 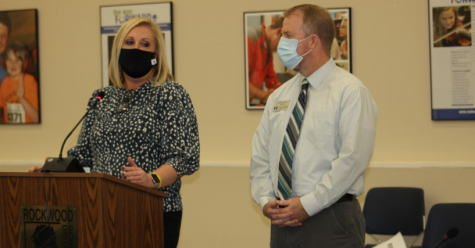 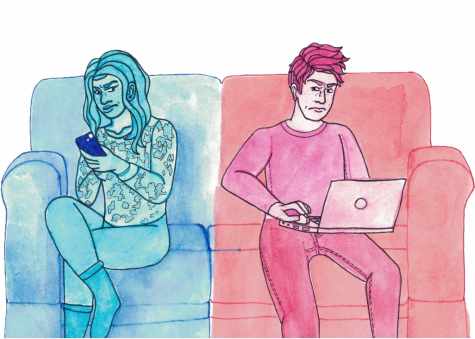 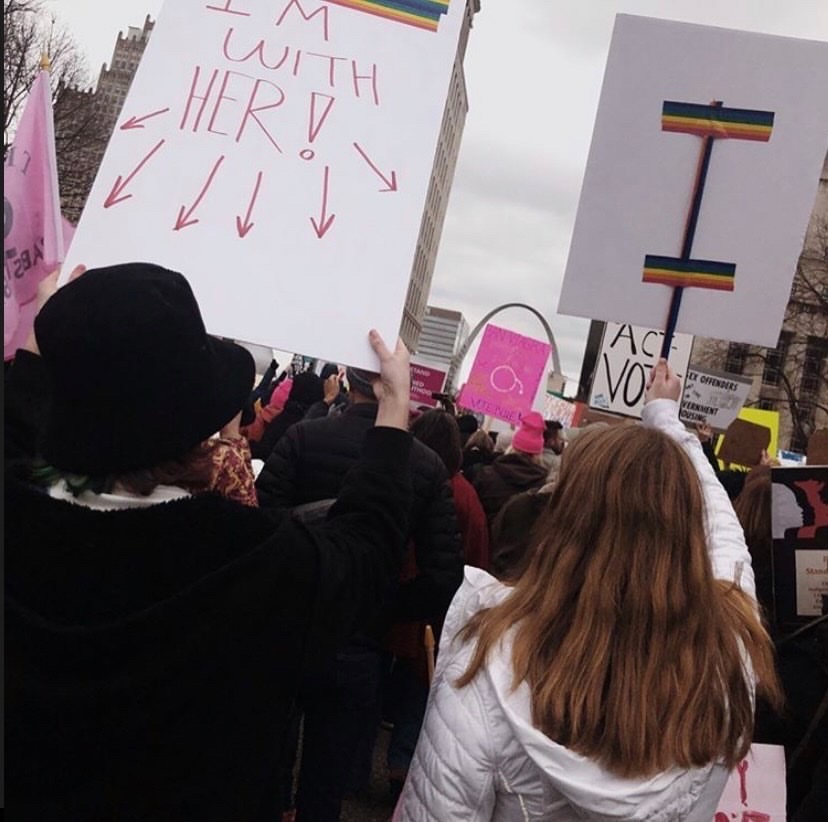 Mal Tockman, junior (left) and Liv Kalemis, junior (right) hold their posters at the Woman’s March last January in downtown St. Louis to support the LGBTQ+ community. “The more people who openly share their pronouns, cis or trans, the less of a stigma there will be around those who have discovered their identity,” Kalemis said.

Dr. Terry Harris, executive director of student services, received a call one day from a concerned mother on the verge of tears because her child wouldn’t log onto Zoom.

This child was transgender and had to log in every time using their birth name which they no longer went by and which the teacher would not allow them to change. So, eventually they just stopped logging in.

Dr. Harris set out to accomplish getting this student’s name changed within the system.

Soon after, the mother called back, in tears, saying that for the first time in months her child was logged into online school and was thriving.

“For some people, that’s not a big story,” Dr. Harris said. “That is what oppression does. So for individuals who are not being oppressed, we don’t seem to think about these different things.”

Dr. Harris is working with other administrators to help implement RSD’s Initiative for LGBTQ+ Inclusion and Equity. The initiative has been a work in progress for five to six years and has made advancements despite being in its early stages.

A priority for the initiative has been starting a conversation amongst the RSD community to help create visibility for those in the LGBTQ+ community who feel marginalized. Telling stories is only the beginning as professional learning on the subject is being pushed for as well.

The district has received phone calls and emails from both students and parents who approve as well as those who disapprove.

“The decision that we will make will always be for the safety, happiness and love of students,” Dr. Harris said. “I think part of what we have to get back to as Americans is having this healthy discourse on certain things.”

As a part of the school improvement plan, RSD has a five-year program to talk about equity, access, inclusion and opportunity.

“Rockwood school district is seen as a leader in education in the state of Missouri, definitely from an academic standpoint, but we want to be seen as a leader from a social, emotional, child-wellbeing, student serviteur standpoint as well,” Dr. Harris said.

One of the actions that took place as a part of this initiative was a movement to have pronouns listed in Infinite Campus for both students and staff members. After years of working with companies, they were finally able to have this as an option.

Students also have taken it upon themselves to take similar measures to aid in inclusion by putting their preferred pronouns in the bios of their social media accounts.

“I think that there’s nothing in America that has ever happened without young people, and so I think that young people advocating and supporting, having been allies to their friends, I think that’s absolutely incredible,” Dr. Harris said. “I think it’s a reminder of how powerful young people are, and so I have nothing but love for individuals who are on the front lines of advocacy.”

Noelle Gratzer, junior, has her pronouns listed in her Instagram bio and uses her platform to spread awareness and educate others through posts on her account.

The goal is to provide support to the community as well as a safe environment for those who are not cisgender, Gratzer said.

As a member of the LGBTQ+ community, Gratzer has noticed a stigma. Despite not having received much direct disapproval herself, she has encountered many people who seem close-minded regarding the topic and has witnessed slurs casually thrown about.

“When we see things like this happen, we need to make sure to speak up and hopefully educate people while doing so,” Gratzer said.

Curiosity has been another response as multiple students have reached out to Gratzer for further explanation on why her pronouns are in her bio.

Gratzer said she is happy to explain and many people have decided to participate in the movement as a result.

“I think it’s important that RSD continues to create a safe space where people are free to be open about themselves,” Gratzer said. “This includes responding to discriminatory behavior in a way that helps to reduce it and prevent it in the future.”

Emma Naes, junior, has had multiple teachers who ask students for their pronouns and one who changed their Zoom name to include their pronouns.

“I know some kids at school who are super chill and inclusive to those people, but I can’t say the same for everyone in the school sadly,” Naes said.

Naes only associates herself with those who accept others’ identities, and, as a member of the LGBTQ+ community, is grateful for RSD’s recognition of the social divide and their willingness to do something about it.

“I’ve noticed that a lot of LGBTQ+ people tend to stick together, but a lot of the ‘popular kids’ groups don’t have a lot of diversity,” Naes said. “I wish that there wasn’t such a divide between straight cis people and people with differing identities.”

Lauren Williams, language arts teacher, has been a large advocate for surveying students on their pronouns and is also a sponsor for the Gay Straight Alliance (GSA).

LGBTQIA is a long acronym and it keeps getting longer so one of the things we try to do in there is make sure that the students know about the different identities that umbrella covers so that they are respectful to each other.”

Williams has led professional development for staff members on the topic of LGBTQ+ inclusion where faculty is made familiar with current language and what is acceptable among younger generations.

Discussions take place during GSA meetings about how students orientations intersect with their race or gender, and priority is put on making sure students understand that everyone’s experiences are different.

“LGBTQIA is a long acronym and it keeps getting longer so one of the things we try to do in there is make sure that the students know about the different identities that umbrella covers so that they are respectful to each other,” Williams said.

Her classroom reflects her priority of inclusion as well.

Being as upfront as possible with what behavior will not be tolerated helps to get rid of a problem, Williams said. I have signs that are against using anyone’s identity against them and prohibiting transphobic, homophobic, or sexist language of any kind.

She also recommends using the time of year when teachers are getting to know their students through surveys or names on homework as a good way to ask students their pronouns without putting them on the spot.

“My message to the Marquette students would just be my message to anyone their age,” Williams said. “Just find people that accept you for who you are, and ignore everyone else.”