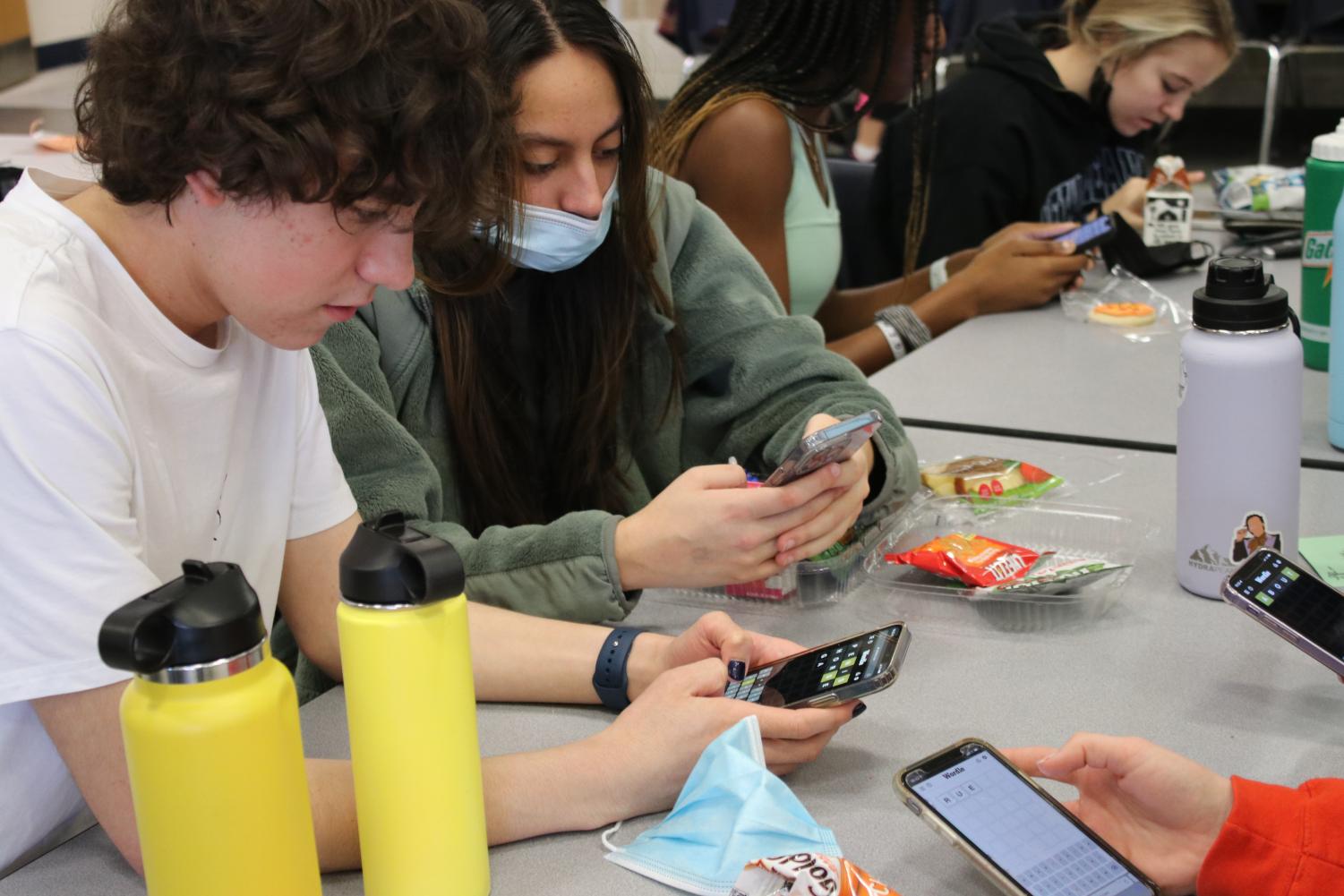 Juniors Collin Durer and Priya Leckliter play Wordle and Taylordle during their lunch. Students all over MHS have taken to making Wordle a part of their daily lives and often use their free time during the day to play the game. (Media by Marin Ellington )

Juniors Collin Durer and Priya Leckliter play Wordle and Taylordle during their lunch. Students all over MHS have taken to making Wordle a part of their daily lives and often use their free time during the day to play the game.

Exasperated and near failure, senior Andrew Lee sat with his friends guessing word after word incorrectly.

With only one letter incorrect, the group seemed to guess every other possible letter combination until finally the word was revealed to them: SHAKE.

Wordle, a New York Times run brain teaser, has become the game at MHS that no one is getting tired of, Lee said. The game consists of a 5×6 grid with the goal of correctly guessing the word of the day. After each guess, players are made aware through colored squares of which letters are not in the word, in the wrong spot or in the correct spot based upon their guess.

“It’s something interesting to get my mind rolling and thinking about different word combinations,” Lee said. “I continue playing because honestly it’s something to look forward to every day.”

Lee said Wordle doesn’t create competition with others, but instead with one’s self.

“It’s a mental test to see if you can logic your way to the word,” Lee said.

For the millions of players such as Lee, brain teaser games have become a daily challenge to look forward to and an activity with positive long-lasting effects on brain health.

According to The New York Times, Wordle is played by more than 300,000 people daily. The game has gained such popularity that it is played by teens and adults alike.

Leslie Tiemeyer, FACS teacher, said a frustrating but entertaining part of the game is the difficulty of the words as they are not ones she would use in everyday speech.

“Like any millennial, I was resistant at first,” Tiemeyer said. “I said to myself  ‘no way, don’t do it, Leslie,’ and then a few days later, I caved.”

Reminding her of Wheel of Fortune without the clues, of Scrabble without the strategy and of Boggle, Tiemeyer said she soon became hooked on the game.

“It’s just one word,” Tiemeyer said. “You can give it as much or as little thought as you want.”

For many players like Tiemeyer, social media was the catalyst to the discovery and popularity of Wordle. David DiSalvo, author of several books on brain psychology, said social media has fostered the spread of games such as wordle and allowed them to gain traction among teenagers.

“Wordle fits a model that’s popular with digitally savvy generations – it’s quick to play but still very challenging,” DiSalvo said. “It’s fun to see how much you can improve and also compare your success with others.”

DiSalvo said a compulsive element is present that also keeps players coming back because it allows them to reflect on themselves while engaging in lighthearted fun.

“The only competition is oneself, so they enable us to gauge self-improvement,” DiSalvo said. “We can observe how we get stronger at these games over time.”

Beyond emotional responses, games like Wordle also can influence long-term brain health.  DiSalvo said counteracting the cognitive and physical decline that comes with age is a crucial part of remaining healthy and brain teasers can do just that.

“The brain is an organ, like the heart, and as such it requires consistent activity to remain in solid functioning order,” DiSavlo said. “If brain games can help play a role in preventing disorders like dementia from gaining a foothold, they’re certainly worth doing, and the research is suggesting that is likely the case.”

Ava Nordman, sophomore, agrees that the competition promoted by Wordle can be both internal and external.

“I like to do better than my friends but I do it for fun mostly,” Nordman said. “I try to get better at it everyday.”

Nordman has yet to lose a game of Wordle. Though she enjoys daily participation, she said the game has developed an addictive element that can be seen as players make it a priority everyday to keep their streak alive.

“Brain teaser games have always been kind of popular, but I don’t think it’s ever been as popular as Wordle,” Nordman said. “It’s a trend, one of those things where everyone wants to start playing it.”

While brain teasers have gained popularity, Dr. Joshua Jackson, professor in personality science at Washington University, said games like Wordle are not for everyone. Frustration can often result when players have not aligned their skill level with the task. However, he said the healthy competition it promotes can be fun regardless.

“There is a social aspect of games where comparisons with others aids in enjoyment,” Dr. Jackson said. “Given the state of the world, they are a nice distraction.”

Dr. Jackson also said changes in personality can result from brain teasers as players can become more open and outgoing.

“People who tried a new task, worked on it and improved, were more likely to see themselves as able to take on other new tasks and enjoy doing so,” Dr. Jackson said.

Dr. Jackson said the daily playing of Wordle allows for participants to interact with a shared interest and develops a social aspect beyond the screen.

“Another aspect that is novel to this game is the ability to share your journey through a simple figure that doesn’t give away the solution but tells a story about how you got there,” Dr. Jackson said. “This feature allows you to talk to others and have a shared experience about a game that they did not play.”

Steven Schmitt, math teacher, projects a daily game of Set onto his smartboard at the beginning of class.

Set is a game involving three cards with different shapes, colors and numbers that the player must identify. These cards are either all the same or completely different with one similarity.

“In Rockwood we always talk about lifelong learners, so anytime students are using their brain and keeping it active, that’s good for mental health,” Schmitt said.

Schmitt’s love for his favorite puzzle game, Cross Sums, was introduced to him by a fellow teacher, and he recommends it to everyone he meets. Cross Sums is a crossword-style game involving numbers 1-9; however, digits cannot be repeated more than once in a horizontal line or vertical column to create the target number.

“I just find it entertaining,” Schmitt said. “Putting all the pieces together and figuring something out is a feel-good moment, so it’s kind of fun.”

Sums is only one of millions of brain teaser games out there, and since Wordle, more and more similar style brain teasers are popping up.

Her plan of action is to typically start with “Swift,” “speak” or “ready” as they possess the most common vowels.

“The fact that it’s related to one of my favorite artists makes it so much more fun,” Nguyen said.  “It’s also fun to discuss how absurd some of the words are with my friends who also like Taylor Swift.”

The race to guess the correct word in the least amount of tries is one that Nguyen and her friends compete in every day.

“It’s sort of a bonding game in that it’s a fun competition everyday to see who can play the fastest and who can get it in the least amount of tries,” Nguyen said.