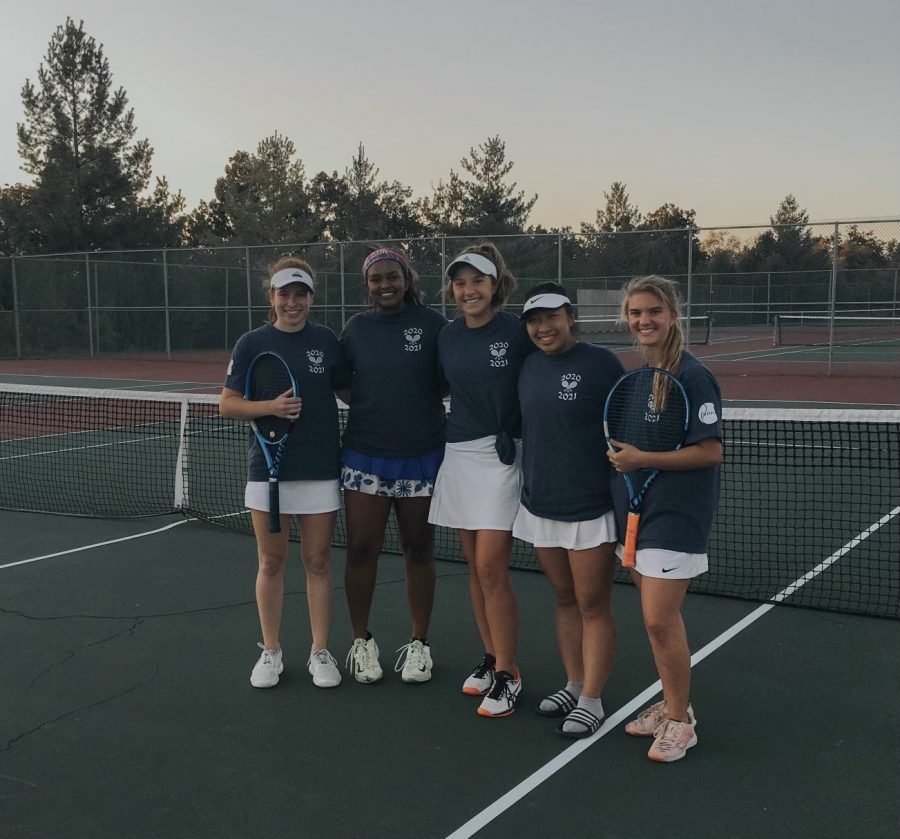 Girls Tennis finishes their season with a win against the previously undefeated Timberland. “This season was by far the most enjoyable of my time in high school despite the uncertainty and restrictions due to coronavirus,” Phoebe Calabrese, senior and varsity player, said. “All of our players wanted the best for one another, and we were each other’s biggest supporters.”

Girls tennis ended its season, shortened due to a late start, with an 8-3 record and second place at Districts Wednesday, Oct. 7.

Despite being a low-contact sport, the tennis season was not immune to the effects of COVID-19. Social distancing was required between teammates, yet Clare White, junior, was still able to take pleasure in participating despite the restrictions.

“The season was exciting and fun as usual,” White said. “Tennis is a nice break from all the studying and Zooms.”

In addition to practices five days a week, the two also picked up extra practice time in preparation for their match against Lafayette, coming to school at 6:30 a.m.

While certain restrictions were common among fall sports, such as a limitation of the amount of spectators, tennis picked up another change as they were not able to have new uniforms.

White shared that coaches communicated it would be unnecessary to have the players pay for new uniforms when they were still uncertain if a season would take place, but team shirts were purchased instead.

“I was a little disappointed because I always enjoy getting new uniforms, but I understood because of the circumstances we were in this year,” White said.

Though there was much relief to even be able to have a season during the uncertainty of the pandemic, junior Maria Davey, junior varsity player can’t help but reminisce the previous years.

“Last season was a better experience just because we were able to fit in more things such as team bonding,” Davey said. “Games were more spread out and we were able to enjoy the season for a longer amount of time.”

Tryouts were pushed back from Wednesday, Aug. 12, to Monday, Aug. 24, with less time for coaches to evaluate as they only lasted one week.

The program was able to push past the effect of restrictions on their season and improve. After having lost 0-9 to Lafayette earlier in the season, the team was able to fight back against them in the District Championship losing only 4-5.

Both White and Davey attribute some of this to the coaching ability of Joshua Hyde, varsity coach and Rob Jacoby, junior varsity coach, who, despite being a new addition, was able to continue the three season undefeated streak of the junior varsity team.

“The coaching was effective especially considering the circumstances, and they made sure everyone got to get in matches,” Davey said.

Joshua Hyde, serving as varsity coach for only two years was very proud of the way his players performed this season. Though his team has experienced a lot of success, he still considers his coaching style to be developing.

“I would say I have a very flexible and adaptive style,” Hyde said. “We had to place some new protocols for keeping players safe, but the nature of our sport allows for easy social distancing.”

Though the season ended with a successful record, Hyde considers the District Championship game against Lafayette to be one of the most significant moments of the season.

“It showed that our team had a tremendous amount of mental toughness and grit to get over the psychological hurdle of losing earlier in the season,” Hyde said.

Varsity tennis was able to push past losing the previous season in the quarterfinals to making it to the District Championship this year.

“I couldn’t have been more proud of my young ladies as they left everything out on the courts all season,” Hyde said.