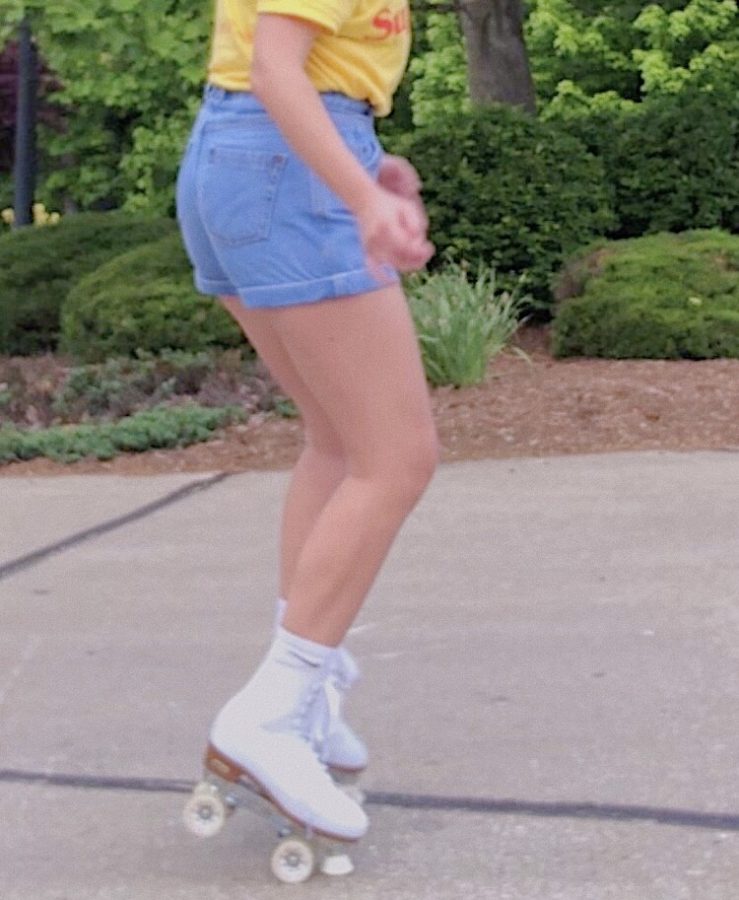 The hobby that took America by a storm in the 90s and 2000s is making a comeback: roller skating.

Roller skates are sold out in stores across the country, and this comeback can be credited to Tiktok user Ana Coto.

On Tuesday, Apr. 28, the video of Ana Coto cruising down her neighborhood to the classic 2000s hit “Jenny from the Block” quickly went viral and has amassed more than 1.6 million likes, 14.8 thousand comments and 10.5 million views.

According to Insider, roller skate companies soon saw a massive influx of sales. Amazon, Dick’s Sporting Goods, Walmart, Target and even second-hand sellers had sold out plastered over most of their roller skates.

Natalie Kowalski, junior, has been skating since she was a kid and rediscovered the activity through Coto’s Tiktok.

“Tiktok starts many many trends and I for sure think skating videos on the app directly have correlated to roller skate sales,” Kowalski said.

She is more than happy about the retro hobby becoming a trend again, and said she doesn’t like the fact that many are trying to keep the activity to themselves to prevent it from becoming a trend.

“I love that it’s gaining traction,” Kowalski said. “I think it’s great to introduce another generation of people to a fun activity, and gatekeeping things and saying they shouldn’t come back is boring.”

Roller skating is also becoming popular again due to the amount of time teens have during quarantine.

I think it’s great to introduce another generation of people to a fun activity, and gatekeeping things and saying they shouldn’t come back is boring.”

Eliana Wright, sophomore, has picked up the activity again in the past month and finds it to be her escape.

“It makes me feel happy and during the quarantine it has given me something to do,” Wright said.

Because renting skates or going to a rink nearby isn’t a possibility due to COVID-19, teens are ordering them online and skating around their neighborhoods.

“I think most stores are sold out because there wasn’t really a high demand for skates because most people rent them,” Wright said. “But during this time, I think a lot more people are open to activities.”

Teens are having to get creative with where they can skate, as rinks are closed for the time being. Lillie Wallis, freshman, roller skates at home.

“I’ve been skating around the house to get some more practice, but my garage and driveway have also been a great place to skate,” Wallis said. “I can’t wait to go to rinks again once this is all over”

Wallis started skating at the beginning of quarantine, and has been practicing every week for two to three hours. She is more than glad that the activity is making a comeback.

“They are making a permanent comeback but I also think they have always been around, just not for many people so it doesn’t get enough recognition,” Wallis said. “I think it is very underrated and deserves some more attention.”