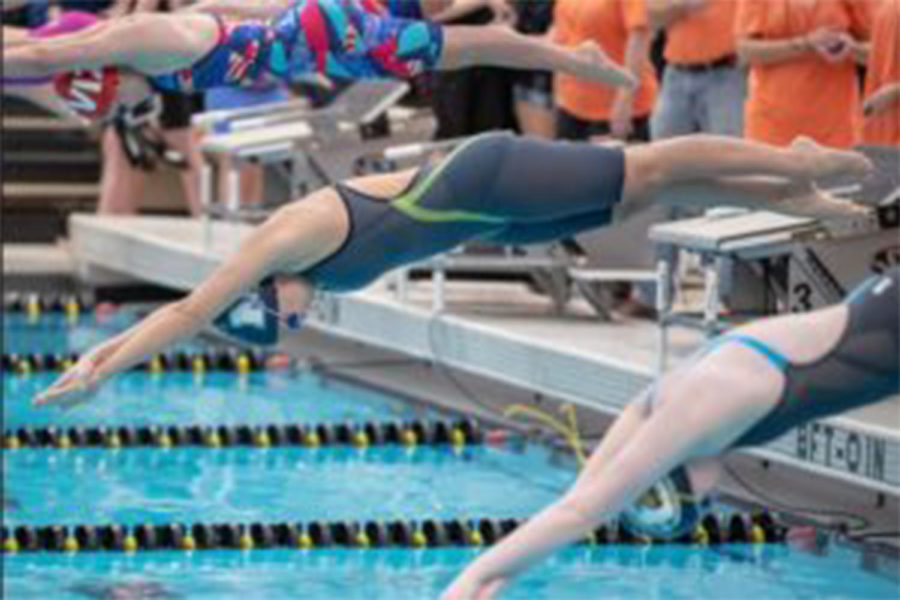 Taryn Zweifel, Senior, dives into the water at the COMO meet at the Mizzou rec center. Zweifel would medal second in the 200 girls medley, the best finish at the meet.

For the third time in school history, girls Swim and Dive team are the Class two Missouri State Champs, with 278 points, a 53.5 point victory over the second place Rock Bridge. This victory marked the schools first girls swim title since the 1999-2000 season. They took the title at the St. Peters Rec Plex in St. Peters on February 15th.

Sarah Rosson, Senior, said the team has been building up to this for a while.

“We’ve worked really hard and to see it all come together is awesome,” Rosson said.

Rosson said the team’s success came from its depth, as the team had 24 top 16 finishes –  the most of any team at State.

“We had a really solid performance all around among our swimmers,” Rosson said. “Everyone played their part and competed within their races.”

This victory at State marked the schools first girls swim title since the 1999-2000 season.

Amanda Yu, Junior, was very pleased to bring the title back to MHS and said the team was really excited too.

“We’re all really happy to bring that title home, especially after all the work we did to earn it,” Yu said. “I didn’t swim year in and year out for four years just to lose.”

Yu swam a medalled three times and was one of only two girls on the team to finish second place, the team’s best finishes collectively.

“I was really impressed by my performance, and I am glad that I did that well,” Yu said. “But I’m also amazed by how strong our competition was this year.”

“Every race was cutthroat, and we actually never won a race, but we competed in all of them, and that’s what helped us succeed,” Schoedel said.

Schoedel said the team handled the adversity well and has high expectations for the younger players next year.

“We got a lot of solid experience for our swimmers, and I’m confident that will show as we prepare for the next season,” Schoedel said.