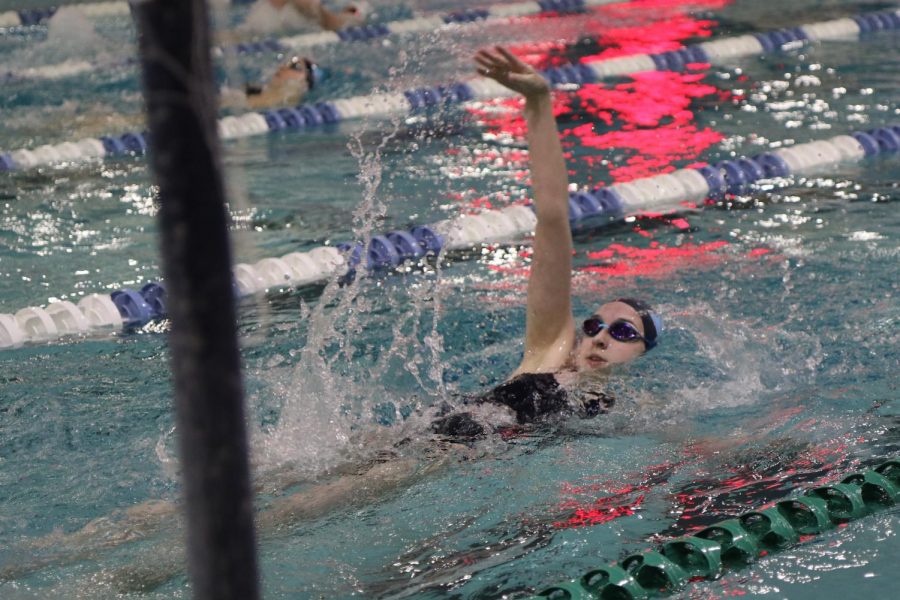 Jenna Howard, junior, swims in the 200 individual Medley in her match against Eureka, January 13. She would finish third of eight and help the team win 127-59.

For the girls swim & dive team, success is nothing new. They are regulars for the State match and are currently the defending champions.

The team continued dominating in their head to head meet against the Eureka Wildcats Monday. They won 127-59.

MHS swimmers expected the match to be close, as the Mustangs finished first and the Wildcats finished second, the last time they met in the COMO invitational at Mizzou, January third and fourth.

In spite of these expectations, the Mustangs dominated in depth, multiple times MHS swimmers finished in the top three places in their respective heats and came away with a convincing victory.

Joe Schoedel, head swimming coach, said this depth has been a defining factor of the team for years and was a significant part of their success in last season’s State title run.

“That title was won by all swimmers throughout our team. They were all able to go and perform to the best of their ability,” Schoedel said. “With that, we were able to perform up and down the board, giving us a huge boost.”

Schoedel said the team’s mentality enhances their strengths as well.

“They go to every meet wanting to win and knowing that they can.” Schoedel said. It helped us win against some of the state’s best opponents in the annual COMO invitational.”

Amanda Yu, senior, said the team has been boasting strong times and impressive victories, as the team has entered the middle part of the season.

“Mid-season form is a part of all sports and is a big part of our play this season,” Yu said. “We have really come alive in the last few weeks and it’s been a great part of our success.”

Yu is the team’s leading 100-yard fly swimmer, having a personal record of 57.85 seconds, the second fastest time in school history. Yu is also in the team’s record books for having the most conference titles, by race, of any active MHS girls swimmer with 5 in the last 3 seasons.

But Yu said the records are beside the point, as far as this season goes.

“Our goal is to win and for our team to crowd the top places on the scoring sheet,” Edelen said.

Edelen is focused on finishing the season off strong, and trying to retain last year’s title.

“We want to use all our strengths and depth to bludgeon and dominate the competition,” Edelen said. “That’s how we’re going to defend our crown.”