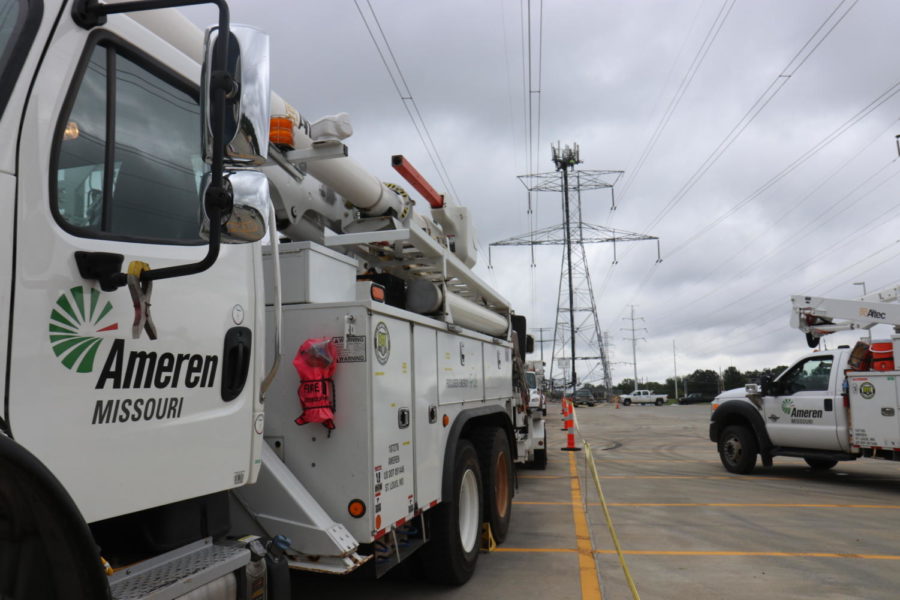 Ameren utility trucks line the MHS parking lot. Twelve trucks and 21 employees were dispatched overnight on Wednesday, Aug. 21, to repair the damaged power lines that run through the property.

Around 180 students are back to parking in their assigned spots this week after last Wednesday’s storm caused power lines to fall in a significant area of the lot.

When Mel Caruso, parking attendant, arrived at MHS last Thursday morning, she expected to see the AT&T trucks that had been working on the cell phone tower positioned in the center of student parking lot. The company had been doing maintenance on the tower since the school year began, displacing 12 students from their assigned parking spots.

“I expected to come in and have to move four more [students],” Caruso said. “I was a little bit surprised at about a quarter to seven when I pulled in and all the Ameren trucks were there. I sped up and said, ‘You guys can’t be here!’”

A large section of the parking lot had been surrounded by yellow hazard tape and 12 utility trucks had parked across the pavement. Due to a storm the night before, eight electrical poles on campus had been damaged, leaving about 300 customers temporarily without electricity and costing Ameren about $25,000 in replacement materials.

Russ Stumpe, construction supervisor for Ameren, had just fallen asleep when he and his crew got the call that there were multiple power outages in the area. All available workers were asked to help.

When Stumpe and his team got to the scene at about 1 a.m., he was surprised by the amount of damage to the line. He said damage to power lines is usually caused by trees, but most of this damage was actually caused by wind.

During the repairs, Ameren was able to reroute power to most affected areas, but the entire Dunhill neighborhood northwest of MHS went without power for more than 12 hours until the lines were reconnected.

I hope this never happens again. But if it does, I hope it goes just as smooth as it did today.”

“Those poor people,” Stumpe said. “I feel sorry for them, but there’s not a lot we can do until we get these poles together.”

Junior Principal Dr. Dan Ramsey worked with Ameren and RSD before school to assess the situation. They eventually decided to call parents and inform them that many student parking spots would not be accessible, and urged students to be dropped off or carpool.

Dr. Ramsey said he worried that close to 300 parking spots would be inaccessible, but by the time school started, the number was closer to 180.

“We were nervous up to the end,” Dr. Ramsey said. “Everybody shows up for school right before it starts and we didn’t know if we would have enough spots. We had some contingencies for students to park on grass in different spots. Fortunately, the bell rang and there were just under 20 spots still open.”

The repairs were finished later that afternoon and every customer affected regained power. There was no damage to the parking lot and students were able to park in their spots the next day.

“I hope this never happens again,” Dr. Ramsey said. “But if it does, I hope it goes just as smooth as it did today.”