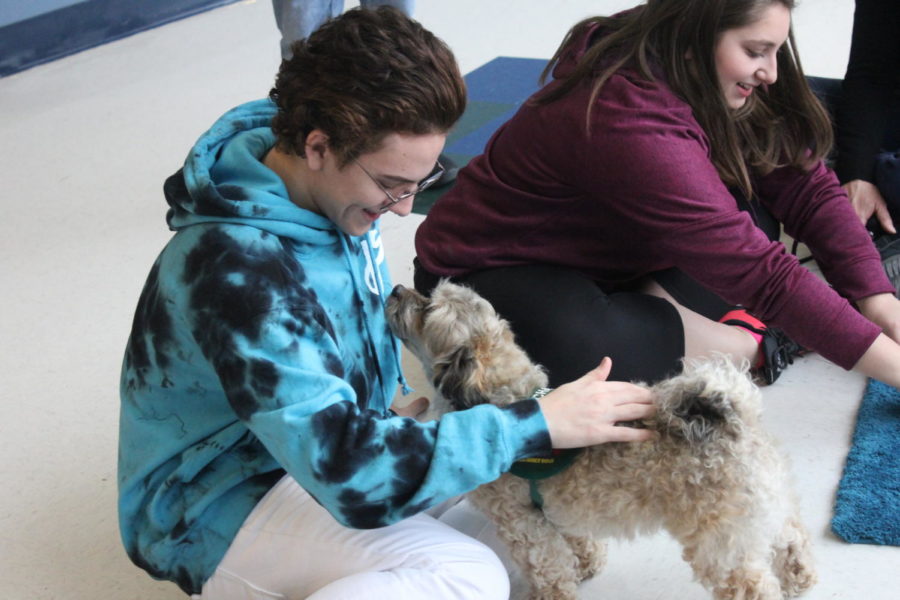 Wet noses, wagging tails and belly rubs. That was the start of the finals week at MHS for some students.

Brooke Davis, junior, was the one to introduce the idea of bringing therapy dogs to Dr. Greg Mathison and Freshman Principal Tracey Waeckerle. Davis is the president of the United Saviors of Animals (USA), in which students volunteer and raise money for animals, and has been part of the club since freshman year.

“Only being able to exempt one [final] and then having to memorize everything that you’ve learned all year in a span of one week… that’s stressful,” Davis said. “It feels like your whole grade is just writing on these two hours of memorization.”

During the visits of the dogs, USA raised money for CHAMP to help fund the training for the assistant dogs and the people who need their assistance since they offer assistance for free but need $1500 to be able to train the dogs.

“I said that if we do it during school, not only more people would be able to access but also [it would] be more structured,” Davis said.

Debbie Wilkins, dog trainer, visited with her dog Beckett, a three and a half year old Bernese Mountain dog who has been a therapy dog for two years after starting training at 10 weeks.

Wilkins said that to become a therapy dog, the dogs have to complete their basic obedience training and take a temperament test in which the instructors take the dog to a seperate room to test how they react to loud noises and other distractors.

Dogs have five regular visits a month, which last an hour each, and then additional visits like visits during finals, Wilkins said.

“We love coming in, love seeing smiles on kids’ faces,” Wilkins said. “It makes the dogs happy and it makes us happy.”

Waeckerle was the one who helped to organize this after Brooke Davis along with other United Saviors of Animals members presented this idea.

Since other schools, like Lafayette, had done this before and been successful, Waeckerle said, the decision wasn’t hard.

“We are starting on a smaller scale than Lafayette does,” Waeckerle said. “Maybe in the future years we’ll adjust it to be able to open it up to more students.”

Only a small portion of students were able to attend the event, after their teachers signed their class up; whereas, at Lafayette the event takes place after school hours and is open to all students.

Waeckerle said it is still important to help students see that they should not be consumed in the stress of finals.

“Sometimes you need to take care of yourself so that you go into finals with a clear mind and you’re at your best,” Waeckerle said.