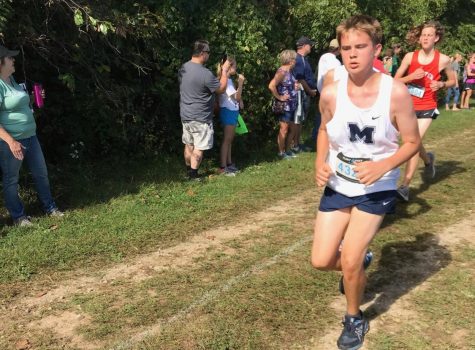 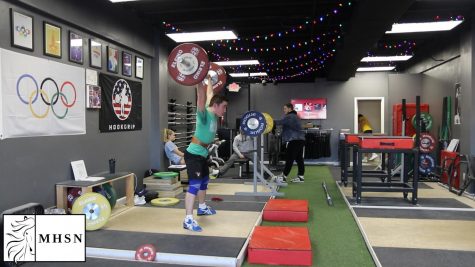 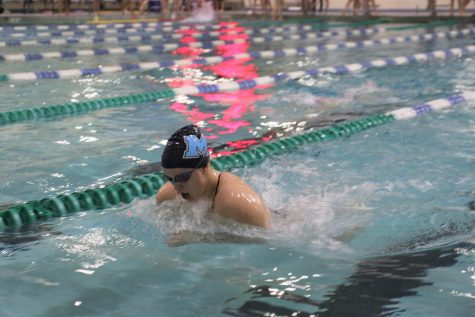 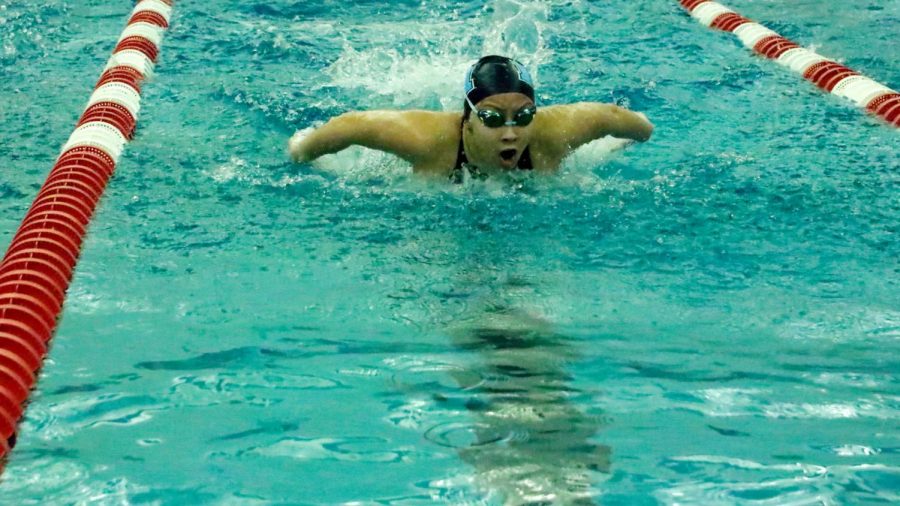 Amanda Yu, senior, pushes to finish strong during the last 50 meters of the 100 meter fly race during Conference finals at Kirkwood High School on Thursday, Feb. 6. Yu came in third, with Marquette going on to win the meet with a score of 441 points.

This race wasn’t supposed to be special. She even told her coach she was going to take it easy. But as Amanda Yu, senior, looked up at the scoreboard after touching the wall she saw something amazing— she had broken the longest held MHS girls swim record, the 100-meter fly, by 0.05 seconds.

“When I finally realized, I heard all my teammates yelling and it was so nice,” Yu said. “It was like a moment of euphoria.”

Yu broke the record during Conference prelims Tuesday, Feb. 4, at Kirkwood High School. Her time, 57.34, was 0.05 seconds faster than the record previously set by Sara Finan, a member of MHS’ first graduating class, in 1996.

Yu joined the team her freshman year after moving to Missouri from Illinois. She has swam since age five, and has focused on the 100 fly since age 10. Yu said she looks at the record board on the wall every day during practice.

“I have a picture of that record engraved in my brain,” Yu said.

The Messenger was unable to reach Finan for comment.

Ranked fourth in state, Yu has been close to breaking the record for a few years. Despite being well ahead of the competition near the end of the race, she pushed herself to reach her goals.

“I was telling myself behind the blocks, ‘I can do this, I can get the record,’” Yu said. “I was trying to build confidence.”

Joseph Schoedel, head swim coach, met Yu at a swim camp before her freshman year. After working with her for the past three years, he knew she could beat the record this season.

“She is very competitive,” Schoedel said. “She has a next gear that when she gets into a race she hates to lose.”

The girls swim team is on a 58 dual meet win streak, and after winning the Kirkwood Conference Feb. 6, have won Conference for six years straight. They are also last season’s state champions. Schoedel said Yu’s leadership will help them retain their title at this season’s State meet Feb. 20 in St. Peters, Mo.

“Amanda plays very much a leadership role with all the younger girls in getting them up and prepared,” Schoedel said. “She gets them hyped up to perform their best.”

Outside of MHS, Yu competes as a member of the Parkway Swim Club. Abby Bomball, senior, has been close friends with Yu since their freshman year and is also a member of both teams.

“I knew she could do it all along and she’s always been close to the time,” Bomball said. “It was cool to see it pay off finally for her.”