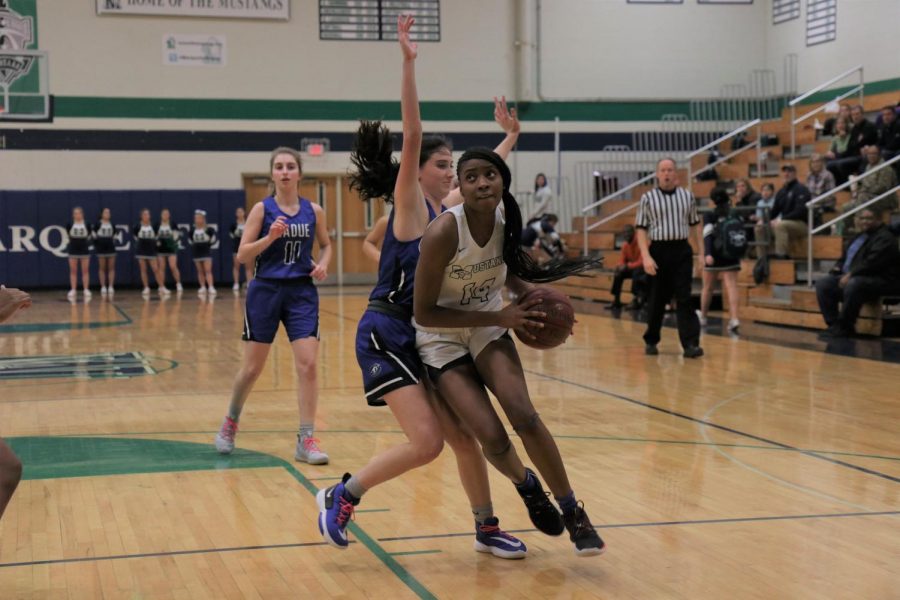 Kennedi Watkins, junior, drives to the basket against a defender. Watkins scored 27 points in the loss to Ladue on January 22.

Banners, hugs and cheers awaited Kennedi Watkins if she was able to make a routine free throw in a game Feb. 1 against the Lindbergh Flyers.

The five foot, eleven inch junior only had to score one more point to become the fifth player in MHS girls basketball history to score 1,000 career points.

“I was kinda shocked,” Watkins said. “You work so hard for three years and it all comes down to one shot so it was really special and exciting.”

The 1,000 point mark is one of the most difficult records for high school basketball players to achieve because it requires the player to perform at a high level from their freshman year through their senior year. It’s also rare to see a player reach the record as a junior as Watkins has.

Although Watkins was happy to reach 1,000 points, she said it required sacrifices along the way.

Watkins said her schedule includes year-round basketball practices which leave little time for homework. This makes her have to stay up later than most students in order to study and complete her assignments.

She also said all of the time she spends in the gym forces her to spend less time with her friends.

“In middle school I kind of felt left out because I always had to go to practice while my friends hung out, but as I’ve gotten older and progressed, I have learned to accept it and to live it up when I am with my friends,” Watkins said.

Watkins said all of the sacrifices and support from her teammates have helped her reach where she is now.

You work so hard for three years and it all comes down to one shot so it was really special and exciting.”

Emma Morrow, junior, said she has been Watkins’ teammate since their days together in the feeder basketball program and has watched her leadership and understanding of the game grow.

“She has gotten better at having a good mindset during the game and reading the plays to know what to do quickly,” Morrow said.

Morrow also said Watkins has always brought a positive energy to practice even before she was named one of the team’s captains. Watkins’ enthusiasm also has made spending long hours in the gym more enjoyable.

“She loves the game of basketball,” Morrow said. “She always wants to improve even outside of practice which sets a good example for younger players.”

Timothy Bowdern, head girls basketball coach, said Watkins was already talented as a freshman, but she has continued to work hard and improve.

“Her length and athleticism allows her to do things most kids can’t,” Bowdern said. “She leads our team in everything: assists, rebounds, steals, points and is kind of doing it all.”

Bowdern said she has always had good explosiveness to drive to the basket, but worked hard over the summer to gain confidence in her ability to shoot from the outside. He said this makes her difficult to guard because of how many different skills she possesses.

Bowdern also said he’s proud of the character Watkins has away from basketball.

“I think everyone likes her, and knows who she is when she walks down the hall,” Bowdern said. “There’s probably not a kid in the school or in our program that doesn’t like Kennedi.”