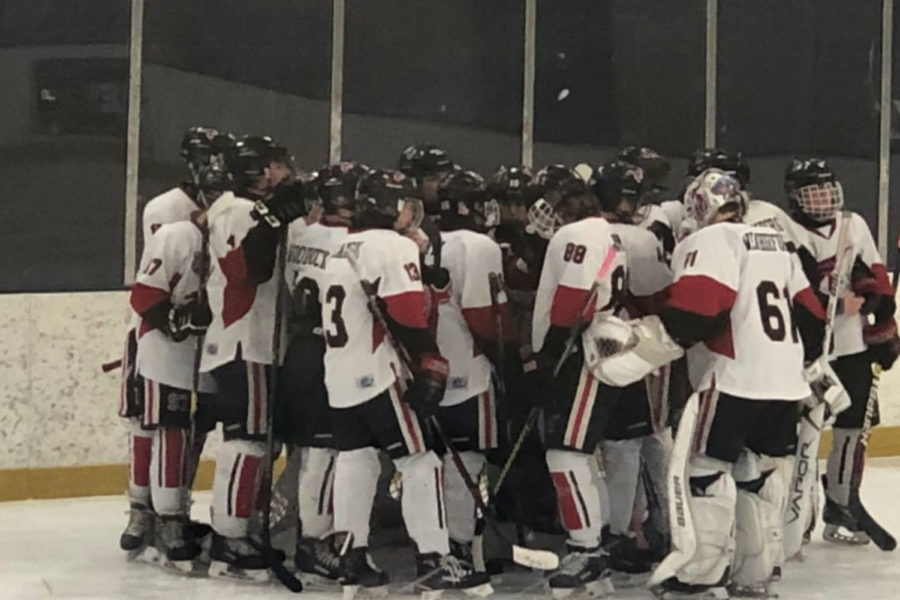 The 14U Chesterfield Falcons crowd around the net at the National Championships in South Bend.

Helmets drop. Gloves and sticks are thrown. Everyone jumps off the bench and races towards the goalie. This was the experience of one particular Marquette goalie when the 14U Chesterfield Falcons won the USA Hockey Tier 2 National Championship in South Bend, Ind., on April 8. After a long and tied game, freshmen Isaac Weatherford, goalie, stopped all of Canton Hockey’s shots to win the Championship in a shootout. Weatherford is rostered to both the JV and Varsity hockey team.

Q: When did you know you wanted to be a goalie?

A: I have been a goalie for five years. We had this thing where we would pass the bag so each player got the opportunity to [play goalie] so when it came to my turn, I was in love with it and I was so excited for the game. I put the equipment on all wrong, but it was just something that I treasured.

Q: How has Marquette Hockey played a role in your goalie skills and performance?

A: I am able to get on the ice more. Some nights I’ll have 7 p.m. to 8 p.m.practice and then right after I’ll have a varsity [practice] from 8 p.m. to 9 p.m. It’s just getting on the ice and being able to get harder shots from those older boys.

Q: What was it like winning a National Championship?

A: It was a great experience overall.  I felt like the team really came together and really showed that through the past nine months, we’re a really good hockey team. We wanted to accomplish a lot of things and we accomplished one of our biggest goals for this season.

A: I felt like we didn’t come out as strong as we wanted to [in the first period]. They popped a couple of quick ones right in the back of the net but I felt like the team had a really good response. We were able to put one in the back of the net and get some momentum from there and carry that on into the second period to score another one and then eventually take the lead. They of course score. It’s a tie hockey game and we have to go into overtime. I felt like that’s where our team really came together more. We were all tired. We were all exhausted but we knew it was mental pain versus physical pain and there is no “I” in team [so we had to] push through. We went into overtime and when we found out there was going to be a shootout, we pretty much knew we were going to win it because that’s one of the most confident places where our team is.

Q: What was your strategy going into the shootout?

A: I just felt like I had to let [whoever is shooting] make the first move and see what he does. Each player did something different, which usually doesn’t happen, but I was able to have some luck with the post, as well as get a quick blocker save for the last one.

Q: How did you keep your moral up throughout the game?

A: We just kept [saying] in our mind, “mental pain versus physical pain.” It’s worth it to block a shot for that little moment of physical pain.