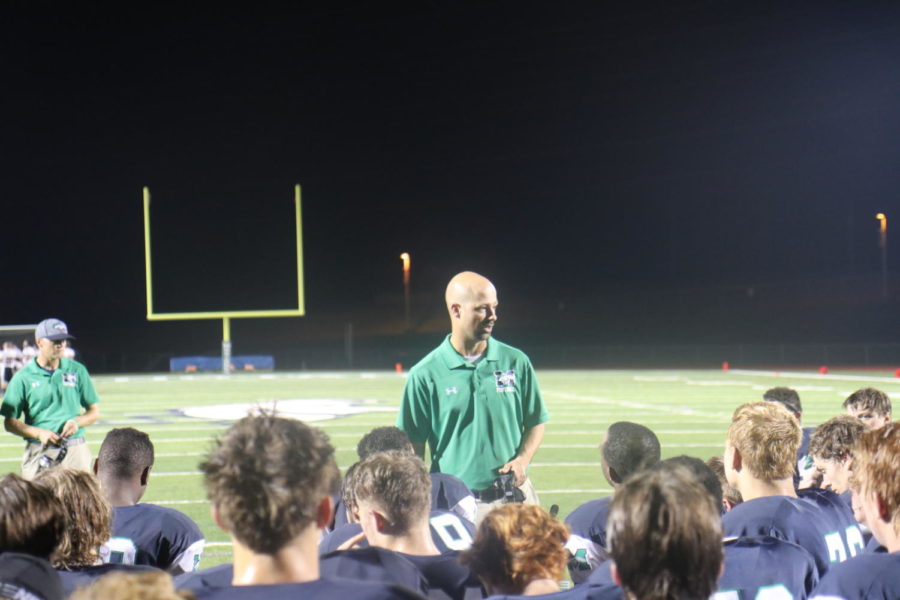 Varsity Head Coach, Matt Klein, reconvines with his players following their 33-0 victory over Parkway Central. This was one of four of their wins this season.

For the first time in five years, Fox High School and MHS will meet on the  football field Sept. 28, Homecoming week. The last time these two schools met, MHS won in a 34-7 blowout over the struggling Warriors, who finished that season with only two wins.

But some players think this next meeting may not be nearly as one sided, as the Warriors stand at a dominant 4-0 this season, most recently beating division rival Mehlville, 50-13, and they have won back-to-back Suburban West Conference National Division Titles.

Junior George Williams, varsity starting quarterback, is making sure to prepare even more for the upcoming contest against Fox.

“I don’t really know what to expect from them, but I do think they’ll be one of the toughest opponents we’ll play this year,” Williams said

Williams and his offense are coming off a49-0 blowout against the Parkway South Patriots, a game where Williams threw for two touchdowns and not a single interception.

“It was a great game for our team, and I hope we can do it again this season,” Williams said.

But this game also serves another purpose, according to Williams, as it will be the first time the Mustangs play at home since their 38 point defeat at the hands of Kirkwood, who is currently ranked fifth in the entire state.

“Yeah, that was a disappointment,” said Williams, who threw a career high three  interceptions against the Pioneers. “I think most of us on the team want to prove ourselves to the school again.”

Junior Josh Merz, varsity defensive end and tight end, who has 10 tackles and leads the team with three  tackles for losses in three games this season, agrees with Williams, saying that this would be a great opportunity to show the school what the team is made of.

“I know Fox is looking really good this season, but we’re going to prove ourselves by winning this game,” Merz said.

Matt Klein, varsity head coach, isn’t paying as much mind to the idea of proving his players and is much more focused on winning the game.

“Fox is a good team, but I want them to be focused on winning, and I think that’s what really matters to them,” Coach Klein said.