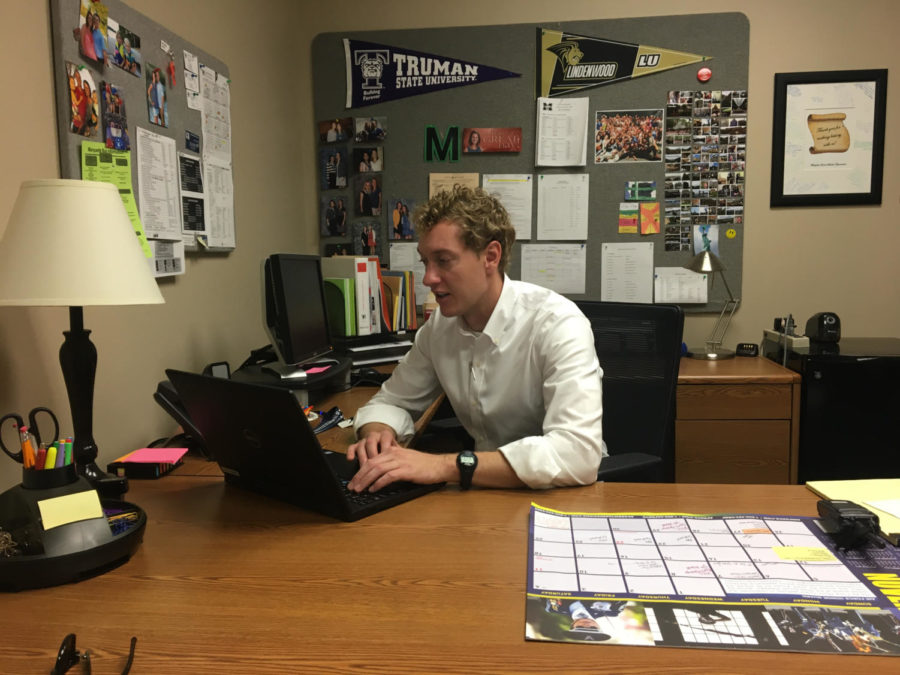 Ryan Bixby, chemistry teacher, took the spot as Freshman Principal for the day while Tracey Waeckerle was out.

Bixby earned his certification about three years ago after getting his master’s degree in school administration and taking a four-hour test.

“There is a lot of stuff and business that goes on at schools that as a teacher you just don’t know about,” Bixby said. “I’m getting to see a whole other side of the coin of the school business.”

As principal today, Bixby said, he has encountered a medical emergency and had multiple discussions with students about making good choices.

Bixby said he faces a hard decision between continuing his career as a teacher or becoming a school administrator.

“A very difficult thing for me would be to leave the classroom and go pursue something else,” Bixby said.

Principal Dr. Greg Mathison, said the opportunity was a great way to introduce Bixby to the field.

“Giving internship hours of actually doing the job is the best way to prepare somebody for this stage of an educational career,” Dr. Mathison said.

Previously, Waeckerle was introduced to the position in a similar way, at times when the other assistant principals were out for meetings, Dr. Mathison said.

Although the pace today was much slower than it would be typically, Dr. Mathison said, it is a good pace for someone new to the position.

“We want to do that for not only Mr. Bixby but also for other teachers that have certification in administration to help them learn the job prior to getting into the job,” Dr. Mathison said.

Beth Ruprecht, freshman secretary, said she has noticed the difference in approaches between Waeckerle and Bixby.

Whether the principal is seasonal or new, Ruprecht said, it is always a learning experience because of the different issues that they deal with.

“They both interact with students really well, they’re very personable with them and take the time to really counsel them instead of just reparative,” Ruprecht said.