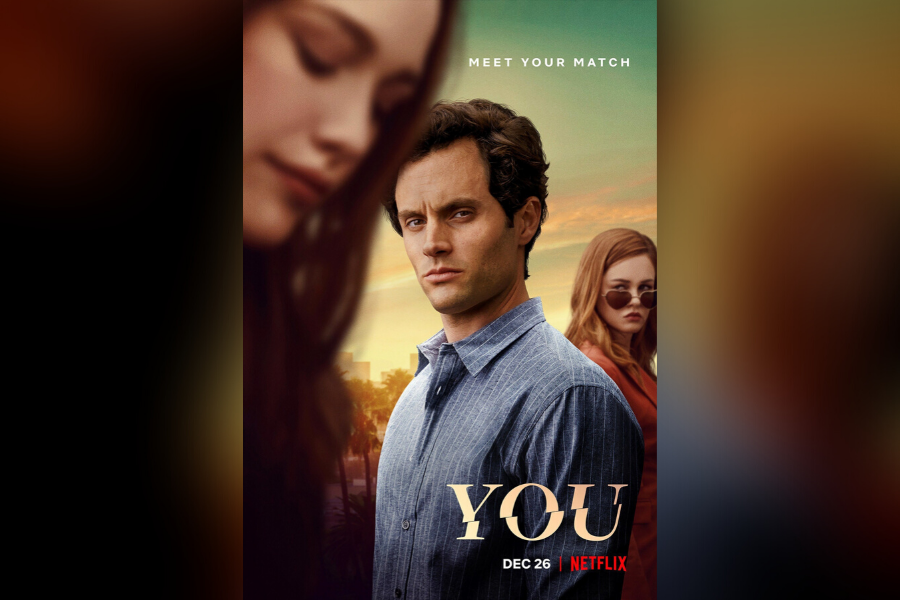 Murder, mystery and “mommy issues.” Netflix’s second season of their Lifetime-turned-Netflix show “You” dropped Dec. 26  and became an instant hit.

The second season follows the riveting story of Joe Goldberg, played by Penn Badgley, after he flees his life as a bookstore clerk in Brooklyn to work for a grocery store in the city he hates most, Los Angeles. The list of reasons for his move ranges from him murdering his girlfriend to his seemingly crazy ex hunting him down for revenge.

Now in L.A., he hopes to start a new life with his new ID in one hand and the keys to his shady storage unit in the other.

One of the unique and gratifying aspects of the show is Joe’s inner monologue throughout the season. Viewers will find themselves empathizing with a murderer, a psychopath even, after listening to Badgley’s sultry voice and convincing words.

The main focus of season two revolves around Joe’s efforts to better himself after his first season of hardships. He continues to tell himself he has matured, that he has changed. As a viewer listening to him rationalize red flag after red flag, you will want to believe him, you really will.

However, it’s not long before Joe finds another love interest to obsess over, causing viewers to quickly lose faith in Joe as he descends into a downward spiral. He has found another damsel in distress, another quirky, intelligent and enticing girl he is just waiting to “fix.” And so the toxic stalking, lying and manipulating returns for another season.

An important issue “You” brings to the forefront is the romanticizing of unhealthy relationships. Scrolling through Twitter and Instagram posts about the show, it’s much easier to find women praising Joe’s cheekbones and charisma than questioning his compulsive lying and self-destructive behavior.

No one calls this out more than Badgely himself. When a fan tweeted “@Penn Badgley kidnap me pls,” Badgley responded with a simple “No thx.”

My favorite response is when a fan tweeted, “Said this already but @Penn Badgley is breaking my heart once again as Joe. What is it about him?” Badgely hilariously replied with “A: He is a murderer.”

The show delves into many other issues this season such as rape, domestic abuse, childhood trauma, drug addiction, privilege and navigating love. The show expertly ties these issues together with its complex, highly developed characters and well-paced plot to create a compelling and addicting show.

I give “You” two thumbs up for being one of the few shows that gets me thinking while simultaneously entertaining me. Netflix’s “You” season two will keep you hooked until the very last minute and leave you questioning how far is too far when it comes to love.