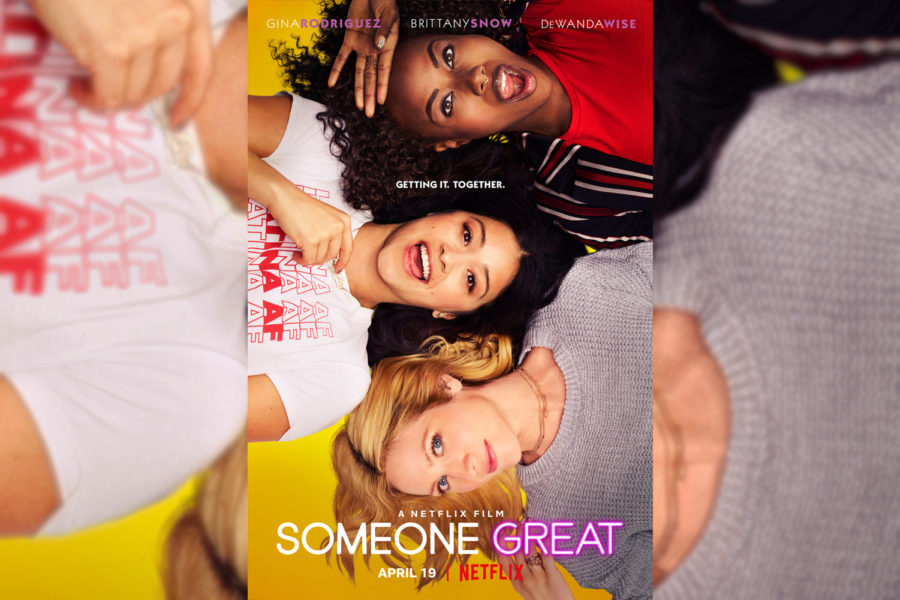 Every great break-up movie has an epic getting-over-him storyline within.

One of the newest Netflix comedies “Someone Great” takes a quite different approach to getting over a break up. The story follows Jenny (Gina Rodriguez), a Latina girl who has just been offered the job of her lifetime at Rolling Stone Magazine. The downside: it’s on the other side of the country and her boyfriend Nate (LaKeith Stanfield) doesn’t want to leave New York. A tragic break-up ensues.

In an effort to help their best friend get over this tragic break up and to spend time with Jenny before she leaves for her new job, Blair (Brittany Snow) and Erin (DeWanda Wise) give up their whole day to get into trouble and make new memories as a group.

It was very funny and is a creative approach to the idea of a break up movie but I was disappointed in the lack of plot line.”

I was a little underwhelmed by this movie. It was very funny and is a creative approach to the idea of a break up movie but I was disappointed in the lack of plot line. It honestly just felt like a day in the life of someone without any elements of an exciting drama. If the excessive number of unnecessary scenes were cut out this movie, it would only last a hot second.

I also was slightly annoyed the movie didn’t have a very accurate timeline. The movie is supposed to take place on the day following Jenny and Nate’s breakup, but the timeline involves multiple episodes of sleeping and way too many scene changes for it to all fit in one day.

On the positive side, the casting was fantastic. Rodriguez is a Latina goddess and I wouldn’t image anyone else playing the sassy Jenny character. I also was so excited to see Snow’s interesting take on her role. She perfectly portrays the “good girl gone bad” that Blair needs.

Overall, I think this movie could have been more developed with the ups and downs of a strong plotline, but I did end up enjoying the movie.