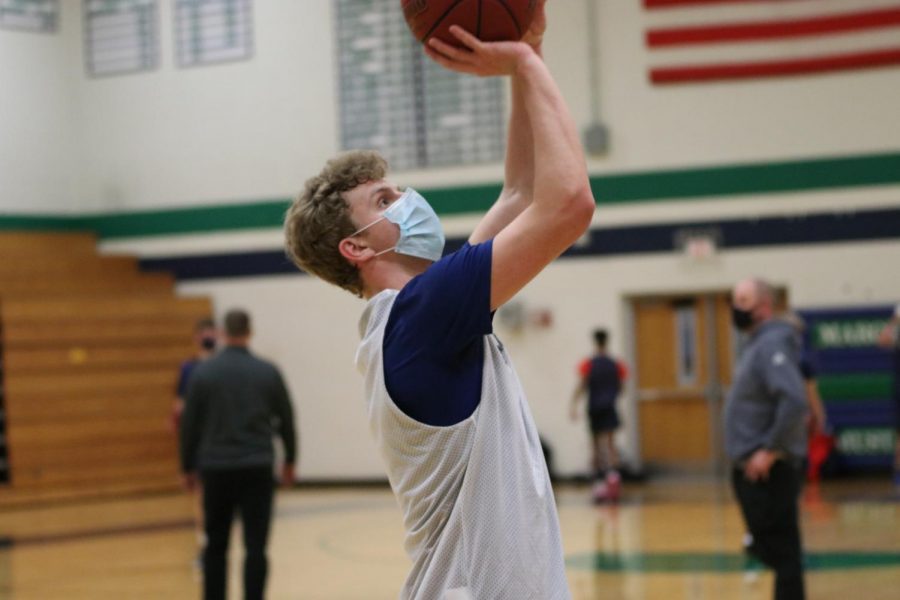 Owen Marsh, Senior, practices free throws during the varsity basketball’s team practice. Marsh was one of the players to test positive for Covid-19 during the team’s try outs on November 2, tryouts resumed on November 17.

The varsity and JV boys basketball teams resumed tryouts Tuesday, Nov. 17 after a two week quarantine as a result of being exposed to COVID-19 the first day of tryouts Monday, Nov. 2.

Eric Schweain, varsity basketball coach, does not know how his players will react to the unexpected halt in their tryouts.

“Hopefully, everyone makes good decisions, stays healthy, because we are ready to get back into the gym and work to improve,” Coach Schweain said.

Almost two weeks after the original tryout date, coach Schweain used his original notes he took on players’ performance to continue to judge their skills.

“It is hard to social distance for an inside sport,” Schweain said. “However, I have some ideas and hopefully we handle this ongoing problem better.”

Schweain said the COVID-19 protocol once a player tests positive depends on the proximity of the affected player to others on the team. Once an infected athlete comes in close contact with another athlete within six feet for more than 15 minutes without masks, that athlete needs to quarantine.

“I hope we are not affected later in the season,” Coach Schweain said. “However, we will do what is required to move safely through the months in front of us.”

Once the varsity and junior varsity teams are finalized, they will begin to prepare for their first home game Tuesday, Dec. 8 against Fort Zumwalt West.

In addition to this recent two week quarantine for basketball tryouts, Riley Schweain, junior, had to quarantine for two weeks before tryouts after an exposure to COVID-19.

“I do feel like my skill was somewhat affected because I wasn’t used to moving around a whole lot,” Riley said.

Riley said he fears an outbreak could occur later in the season with the addition of winter cold and flu season on top of the pandemic.

Although, Schweain enjoys playing the sport and prepared for the continuation of tryouts by practicing shooting on his basketball hoop during quarantine.

“I think it will be really fun to work as a team again after all the time of everyone working by themselves,” Riley said.

Owen Marsh, senior, was one of the varsity athletes who tested positive for COVID-19.

Without an accessible basketball court to practice on, Marsh said he is unsure of the effect COVID-19 has had on his ability to play.

“I’ve been able to prepare for tryouts in quarantine by running outside,” Marsh said. “It’s not much but it has helped me stay in shape a little bit.”

Marsh said he knows many people who tested positive for the virus, and he hopes another large team outbreak does not repeat itself.

“It sucks not being able to practice right now, but it’s part of playing sports during this time and we are just going to have to work around it,” Marsh said.

Kari Marsh, parent of Owen Marsh, praised the MHS administration for how they quickly handled the outbreak on the team.

Kari has two sons affected by the quarantine, and she acknowledged how they continued to stay active during quarantine by practicing shooting or working out.

“They are both in great shape, so I don’t feel this set them back too much,” Kari said.

She said she supports the continuation of sports because of their importance to the physical and mental health of the athletes and because they create necessary structure for their lives.

“The benefits to playing sports right now outweigh the risks involved,” Kari said. “I completely support keeping my sons involved and active in doing what they love.” 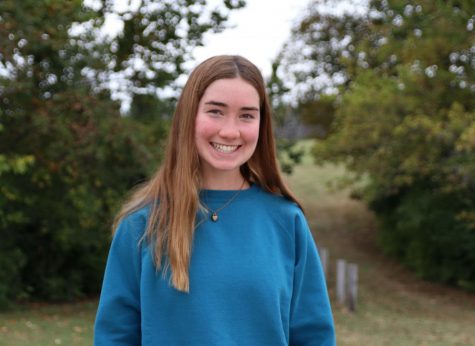