THE PARTNERS IN EDUCATION program (PIE) is responsible for helping students figure out their career paths after high school and college. PIE brings in speakers to talk during assemblies and sponsors the career shadowing program as well as Project Interface, in addition to planning other events.

PIE has volunteers talk to students about different subjects every year.

PIE has also taught students about careers they want to pursue through its career shadowing program which allows juniors to shadow a volunteer in his/her job. “It’s an opportunity for kids exploring their careers,” Pischel said.

Junior Principal Carl Hudson said the career shadowing program is a positive experience for students because it shows them the good, the bad and the ugly of the jobs they are considering.

“If you said you wanted to be a nuclear physicist, there is one in the area that you can observe and talk to about that career,” Hudson said.

Students often will switch careers from one to another after career shadowing, giving them a greater idea of what they truly want to do.

Despite an increase in students participating in the career shadowing program, only about 100 juniors are signed up.

“I wish that more students were involved,” Hudson said.

“I felt like aerospace engineering would be more exciting than mechanical engineering,” Ramakrishnan said.

He said switching from mechanical engineering to aerospace engineering should be a fairly easy transition.

Ramakrishnan was not always set on engineering and used PIE’s career shadowing program to help decide on his future. He shadowed computer science at Scott Trade before setting his sights on engineering.

“It was more of a cubicle job,” Ramakrishnan said.

Ramakrishnan is preparing to attend either, Missouri S&T, Purdue or Texas, Austin.

Overall, Pischel said PIE is an effective program for students to utilize, and an opportunity for them to explore different careers. 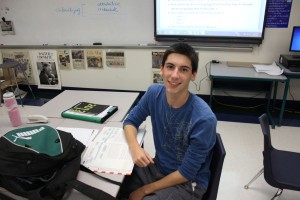 John is a junior and this is his second year on staff. Outside of newspaper, it is his first year on the cross country team. He enjoys spending time with...