Brian McBride (third in the top row) was a member of the soccer team at St. Louis University from 1990-1993. During his college career, he set school records for number of goals (72) and assists (40).

After failing to get bids in the past, St. Louis is officially getting a Major League Soccer (MLS) team in 2023 with the stadium to be located in the city with a capacity of 22,500 fans.

Chris Kenny, soccer coach, played for St. Louis University (SLU) for the 1982-1983 season and in 1983 he earned Second Team All American Player.

“It will bring a new focus of soccer for everyone,” Kenny said about the new team.

Kenny said SLU’s success came from the expectation of excellence and the bond of the team.

“The best players attended SLU and all the players were fighting for playing time,” Kenny said.

Kenny went on to play for the Chicago Sting and St. Louis Steamers after his collegiate career and was inducted into the St. Louis Soccer Hall of Fame in 2020.

SLU has had many successes in the National Collegiate Athletic Association (NCAA) having won 10 national championships, the most of any NCAA men’s soccer program.

Because of the high expectations at SLU, the program produced many talented athletes such as Brian McBride.

McBride is the current General Manager and former player for the United States Men’s National Team. He played in three World Cups and won one Gold Cup after his years at SLU.

Originally from Chicago, McBride chose to come to St. Louis for his college soccer career.

“St. Louis is the most relevant soccer city in the United States,” McBride said.

While SLU’s high-level soccer program helped to keep St. Louis relevant, the soccer program did not start until the 50s and St. Louis’ soccer history dates back even further than that.

Soccer has been prominent in St. Louis since the 1920s. With the city’s rich diversity of European immigrants from places such as Italy, Ireland and Germany, it’s no surprise how dominant the sport has become said McBride.

The first real league for soccer in St. Louis was the St. Louis Soccer League (SLSL) that began in 1907 and lasted through 1939. St. Louis Soccer Hall of Fame President Jim Leeker said the SLSL is what made St. Louis the soccer capital of the United States.

St. Louis became such a dynamite team for soccer starting in 1920 when the Ben Miller’s team began.”

“St. Louis became such a dynamite team for soccer starting in 1920 when the Ben Miller’s team began,” said Leeker.

The Ben Miller was a U.S. soccer club that was sponsored by the Ben W. Miller Hat Company of St. Louis. The team was prominent during this time period, winning the SLSL seven times as well as becoming the first soccer team outside the northeast to win the National Open Cup.

Other amateur teams have made a large impact as well.

The St. Louis Kutis won seven consecutive National Amatuer Cups from the years 1956-1961, which has never been done again.

Leeker played on the St. Louis Kutis team from 1965-1969. He briefly stopped playing to focus on family and work but rejoined the Kutis team in 1972.

“It was a phenomenal team. The talent and soccer knowledge of the players were high level,” Leeker said.

After winning their third championship in 1958, the entire Kutis team of that year was selected to represent the U.S. in qualifying games for the 1958 World Cup.

Another team, the St. Louis Stars, played in the North American Soccer League (NASL) from 1967-1977. Joe Clarke, former coach of St. Louis University men’s soccer team and current coach of the Washington University Men’s Soccer team, played with the Stars during the 1976-1977 season before they moved to California.

“When I was with the Stars, it was my dream,” Clarke said. “I was actually getting to play professional soccer. It was a great opportunity for me as a young player, playing for my home town.”

When I was with the Stars, it was my dream. ”

“I like where the stadium is going to be located,” Clarke said. “Having the Arch, the Blues, Cardinals baseball, and Union Station right into soccer is just fantastic for the city.”

Clarke said that the MLS has been smart compared to the NASL during his time.

With the MLS growing and continuing to get better, the St. Louis City SC team will help to restore soccer in St. Louis to where it was in the past said Clarke. 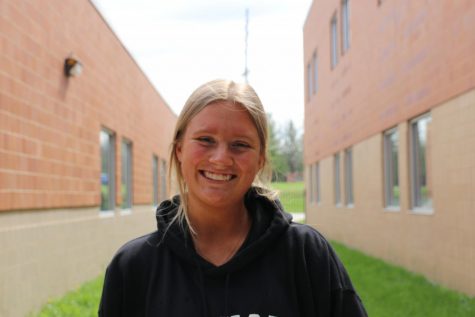 Taryn Moore, junior, is a staff reporter of the Messenger for the 2020-2021 school year. This is her first semester on staff. Taryn also plays varsity...