Black Literature: Perspectives of Representation of Black History in Education 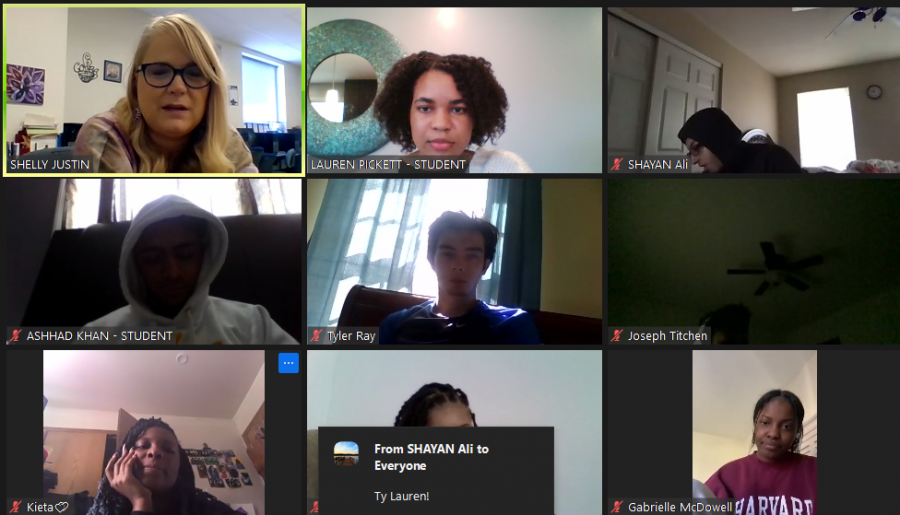 Tyler Ray, senior, said Black Literature offered him the unique outlook of Black figures and history. He said the class hasn’t received much attention during the pandemic because it’s sensitive. “I’m afraid people would get preconceived notions of the class or the idea that it’s hating on white people, which is the farthest thing it’s from,” Ray said. “It’s good not everyone is talking about it, so it can develop and define its own brand.”

Jordan King, senior, was eager to enroll in an unprecedented opportunity. She had the chance to see herself, a Black female, in her school curriculum before she graduated high school.

Black Literature, a new course for juniors and seniors to explore literature by Black writers, was offered solely in MHS in the first quarter, but other RSD schools will run it in the second quarter.

King said this class served as a segway back to school from summer protests against police brutality. The course developed into a sanctuary for candid conversations about Black culture, racism and discrimination.

“We can’t go into class with a heavy heart because what goes on outside of school affects you tremendously,” King said. “If we can’t feel safe inside our house while we’re in school or talk about how we feel, we can’t feel whole.”

She said the diverse perspectives from her peers create well-balanced, in-depth discussions beyond the assigned novels. But she wondered why the class needed to exist. She questioned why the history of other races wasn’t isolated to an elective class.

“There’s not enough representation of the effect of Black history, and it’s blocked because it is a choice,” King said. “People say ‘you should be happy your white classmates want to learn about this’. Nobody cheered me on when I had to learn about U.S. history, so why should I cheer them on for learning about history?”

People say ‘you should be happy your white classmates want to learn about this’. Nobody cheered me on when I had to learn about U.S. history, so why should I cheer them on for learning about history?”

Lack of Black Representation in Education

Missouri is one of several states that does not directly mention the civil rights movement, white supremacy or cite slavery as the central cause for the Civil War in the state’s 6th to 12th Social Studies Standards for Grade Level Expectations.

The only reference to Black people is to trace the development of African American culture in non-slave states and in the context of slavery for sixth to eighth grade U.S. history classes, according to the Missouri Department of Elementary and Secondary Education.

Under 10 percent of total class time on average is devoted to teaching African American history, according to the Smithsonian National Museum of African American History and Culture (SPLC) in 2016. Out of 10 popular U.S. history textbooks, the average score was 46 percent for content against the SPLC guidelines for studying American slavery in 2017.

Mylah Childs, senior, said RSD’s core curriculums have basic representation of Black history and literature. As a Black female, she said her lack of depth in understanding racial issues is the result of the neglect of Black history in her classes.

“History classes repeat the same stories hoping students will just take them and move on,” Childs said. “History classes treat African American history like an untouchable moment in the past and like it’s something they’d rather forget than learn from.”

She said students in Black Literature freely discuss modern or historical topics such as the Black Lives Matter and Black Power movements and messages from Maya Angelou.

Students are free to integrate topics about current events, such as the death of Chadwick Boseman, into scheduled conversations. Some texts students analyze include “Born a Crime,” “When They Call You a Terrorist: A Black Lives Matter Memoir” and “The Poet X.”

Childs began to feel a deeper connection to the class, which she said gave life and added importance to her high school experience.

She said the initial idea of the Black Literature class was strange and humorous because of the lack of representation of Black people in school. Now, she sees this as a step forward for representation and awareness.

Nic Stone, a New York Times bestselling author, aided in novel selection for the Black Literature curriculum, including her books “Dear Martin” and “Odd One Out.” The genres spand from Afro-Latino to South African to U.K. African to provide a global perspective.

Stone said she wasn’t surprised Black students could be reluctant to enroll in the class. She remembers reading somber books about racism, police brutality and the Black experience. Including more uplifting books about the Black community was important to her.

“It goes to show the effect of never seeing ourselves reflected in literature,” Stone said. “We internalize the idea that this particular thing isn’t for us.”

People are beginning to gravitate toward nonfiction novels about racism, Stone said, and they are missing the influence of fiction on social change. She said rhetoric and fiction allow readers to stand in someone else’s shoes and have unexpected conversations.

“The further we get into the time that we are in now, the more people are realizing the flexibility of language is a double edged sword,” Stone said. “Language can be used to highlight the intensity and negativity of something, but it can be used to euthanize and soften its edges.”

Tyler Ray, senior, is mixed-race, with an Asian mother and white father. He has heard stereotypes of Asian Americans, which allows him to empathize with his peers, but said he understands his privilege to “pass” as white.

His mother taught him to avoid marginalizing people because of their differences, and he was influenced by his father’s desire to conceptualize issues he never experienced. He said Black Literature covers sensitive issues and students tend to provide personal experiences.

“It is eye opening to hear African American students say they’re afraid when a cop pulls them over they might be put on the hood of a car or shot,” Ray said. “It’s wrong they fear the people supposed to protect them and different to read statistics than to hear their stories.”

Students should learn more about how different races and ethnicities experienced American history rather than the predominately white, affluent vantagepoint, Ray said.

Without open discussions about racial issues, he said white people won’t realize being racist can be direct and indirect. In Black Literature, students discussed systemic racism and intersectionality, or where margnialized people experience multiple forms of discrimination.

He said acknowledging racism in the modern era can create tension amongst students in classes other than Black Literature.

“When someone asks if the same racism, animosity and discrimination happens today, a lot of white students will feel defensive and unconsciously guilty,” Ray said. “We should all be able to express how we feel without fear of retribution or judgement.”

Executive Director of Equity and Diversity Brittany Hogan helped create the Black Literature class after a teacher’s complaint that the Multicultural Literature curriculum was insufficient. Hogan cultivated lessons over two years such as self exploration and Black families.

Hogan started “Read Like Me” with the objective of allowing Black students to see themselves in the curriculum almost six years ago. She targets elementary and middle schools with the highest enrollment of Black students and provides books for the schools.

She said RSD needs to hold textbook makers accountable for the content in the new versions they purchase to diminish whitewashed historical narratives.

“We cannot just teach the white side of history because we have to show all the people who created history,” Hogan said. “We have to talk about trailblazers we have in Black, Latinx and Asian culture. Oppression has been a huge part of Black people being in this country, but that is not all that is to our story.”

We cannot just teach the white side of history because we have to show all the people who created history.”

Addressing the Fear of the Unknown

Shelly Justin, language arts teacher, was motivated to teach Black Literature because she went to diverse schools and saw a lack of diversity at MHS. She sought out classes likely to attract more racially diverse students and explore the Black narrative that is suppressed.

She said Black literature is still being overlooked in spite of efforts to diversify the curriculum. Learning about Black history and the contributions of the Black community is beneficial for students of all races to recognize achievements from marginalized groups.

The reasons Justin wanted to become a teacher was to help students find their voice and the critical thinking element of the course helps students express themselves.

“I got lucky with the group of kids I started with because they’re outspoken, opinionated and respectful,” Justin said. “I was skeptical at first, but we’ve had amazing conversations.”

Class discussions have ventured to more serious, controversial topics, like the outcomes of the Breonna Taylor case and intersectionality. Justin said it was enlightening to hear their fears and concerns.

“They were reserved in their opinions because they were shocked,” Justin said. “How many times have we ever had that type of conversation in any other classroom? Probably not often if at all, or you wouldn’t have stayed on that topic.”

She said the class reminded her to try to debunk preconceived notions and generalizations about others because opinions and socio-economic status varies no matter someone’s race, age or gender.

Justin was sad to find she was the only teacher to ask to teach the class. It boils down to fear from teachers, she said, and this lack of openness allows everyone to remain divided.

Teachers are fearful of the conservative district and being punished for having conversations about race, she said. Racism in the district compounds these issues, but she said everyone must face their fears and have these discussions even if their views contradict.

“It’s really sad that kids don’t have that outlet, especially our African American students,” Justin said. “Being a white teacher, it was scary and not an easy decision for me to teach the class. We have pretty much only white teachers in the building, and we have a fear of controversies.”

She was pleasantly surprised to have a more racially diverse classroom. Justin said she wants everyone to not be afraid to talk about the Black experience. She aspires to see Black Literature have more student applicants and be a year-long or college credit course.

“It is important to have a class where people can talk to each other about these issues because that is where you learn and escapes stereotypes, racism and prejudices,” Justin said. “The more you know, the more enlightened you are, the better you can make change.”