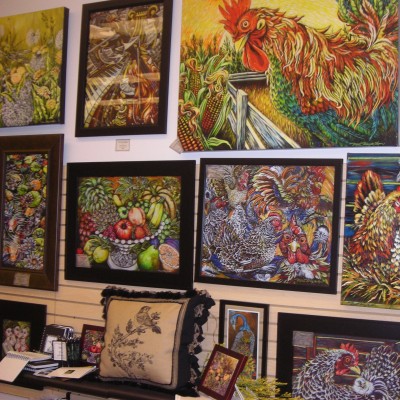 A collection of rooster and farm themed wall art is featured at Fusion.

In the Sears side of the Chesterfield Mall, multiple art stores have filled the spaces of formerly empty lots and are now called Artropolis.

Artropolis, which opened in mid December of 2009, is a collection of artists, artist organizations and theatres that have infused the shopping mall experience with the arts, Stacey Morse, executive director of Chesterfield Arts said.

“Chesterfield Mall Leasing Management approached Chesterfield Arts and asked how to use the empty spaces with artists,” Morse said.

Morse said she made recommendations about various artists and how to turn the empty stores into a fine art caliber shopping experience.

“You don’t really see art stores at the mall,” Heather Cochran, senior said. “There were a lot of really cool alternative art pieces.”

Cochran said she has visited St. Louis Teachers Recycling Inc. and other stores in Artropolis.

“Artropolis has definitely benefited Chesterfield Mall because it’s not just about shopping for clothes anymore,” Cochran said. “It’s made the mall more diversified.”

Cochran said she would go back to the art stores to see what’s new, but she doubts Artropolis as a whole will last very long.

“The stores may be popular during Christmas,” Cochran said. “But the art isn’t in students’ price range. It’s more like West County wives who are looking for something to put in their living room.”

Morse said having Artropolis at the mall has been a positive experience for everybody.

“Having art present in an area that didn’t have it before is great,” Morse said. “Shoppers can have more opportunities to find art now.”

Dramatic License Productions, a theater located in Artropolis, opened in February 2010 and performs main stage theater productions and musicals three to four times throughout the year with one to two cabaret shows in between. The theater holds 85 people and usually presents plays that are dramas or comedies.

“We opened the theater because we thought that people in West County wanted a more professional theater and one that’s close by,” Kim Furlow, executive producer at Dramatic License Productions, said.

Furlow and her husband were approached by Chesterfield Arts to interview with the Chesterfield Mall and worked with the management before the opening of Artropolis.

Ever since opening earlier this year, the company has performed the main stage shows “Steel Magnolias” and “That Championship Season.” In December they will perform, “This Wonderful Life,” a one-man holiday show based off “It’s a Wonderful Life.” The productions are held variously throughout the year and are held in their building at the Chesterfield Mall.

Furlow said students can audition for their shows and get internships by working backstage during shows.

In the future, Furlow said she hopes for a lot of big audiences, lots more kids attending the shows and experiencing theater and a greater MHS audience.

Dramatic License Productions sells tickets for shows at dramaticlicenseproductions.com and for more information about internships, call (636) 220-7012.

Morse said ideally she’d like to see more artists get involved with Artropolis, more events and greater attention drawn to the mall.

“Chesterfield Mall would become a destination,” Morse said. “You definitely don’t want to miss this.”