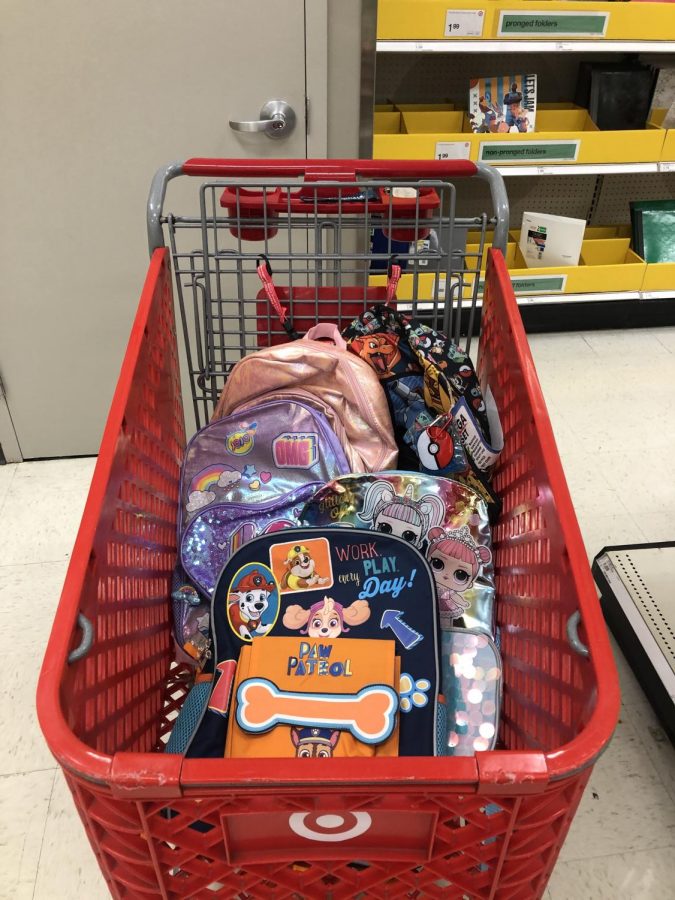 Though it began with the MHS baseball team, the trend of wearing little kid backpacks has spread throughout the senior class and caught the recognition of students and faculty. “My first thought when I saw a student walk in was with one of these backpacks was, ‘Ok, that’s funny!'” Kevin Schultz, language arts teacher, said. “As I saw a few more students do it, I thought it was still creative.”

Brightly-colored and unconventional, images of youthful culture like unicorns and princesses decorate backpacks.

Are little kid backpacks the new trend for senior year?

Senior Max Harris thinks so. Harris said his friend group made an effort to get a large number of people involved when deciding to participate to find safety in numbers and enjoy the trend together.

“It’s not just gonna be one person who wears it,” Harris said. “It’ll be multiple.”

The trend became popular on social media apps and has spread within the school.

Harris said their backpacks are met with mostly amusement from other classmates, but he often feels self-conscious around teachers.

“They might think, why is this 18-year-old kid coming in with a six-year-old backpack?” Harris said.

Alex Nelle, history teacher, has Harris in his 4th Hour class and said he was surprised to see him wearing such a bag, though he did not have any problems with it.

“Max is a great kid who tries to make a positive difference in the lives of others around him,” Nelle said. “If the backpack makes someone happy then I don’t see anything wrong with it.”

“We’re seniors, and it doesn’t really matter,” Syfert said. “We don’t really care if anyone judges us.”

The tradition originated at MHS in 2017 with the baseball team whose pitchers wear a child’s backpack to school every time their opponents score a home run off their pitch. The bag is functional as a way to carry certain pitching gear and bands as well.

“You get to know the kid a little better, and it shows they have a sense of humor,” Meyer said

Meyer played a large role in implementing the use of the child’s backpack on the baseball team, which is modeled after many major league sports teams who engage in something similar.

Although it eventually developed into a lighthearted tradition, wearing the backpacks in major league sports began as a hazing ritual.

Meyer said at MHS, however, the implementation of the backpack for the pitchers was never designed to be a punishment. Despite this, Meyer said he was surprised the athletes chose to continue this outside the baseball season, but he is happy with the positive atmosphere his players’ confidence has created.

“It’s just something so you don’t take yourself so seriously and just kind of keep a little balance about the situation,” Meyer said. “To me, it’s teenage boys showing that they’re kind of comfortable with being themselves and not taking themselves too seriously.”

Josh Syfert got his Jojo Siwa bag from Target and said he had specific reasons for choosing the backpack that he did.

“She is a really good person,” Syfert said. “She gets a lot of hate, but she always just sticks true to herself.”

Despite the recognition the trend has gained throughout the school, students stopped wearing children’s backpacks in favor of a more traditional style after the first week. Syfert, however, said he plans to wear his bag until it breaks under the weight of his textbooks.

“I can’t fit basically any of my stuff in there, so I’m kind of sacrificing some school work,” Syfert said. “The backpack’s awesome, so I don’t really care.”