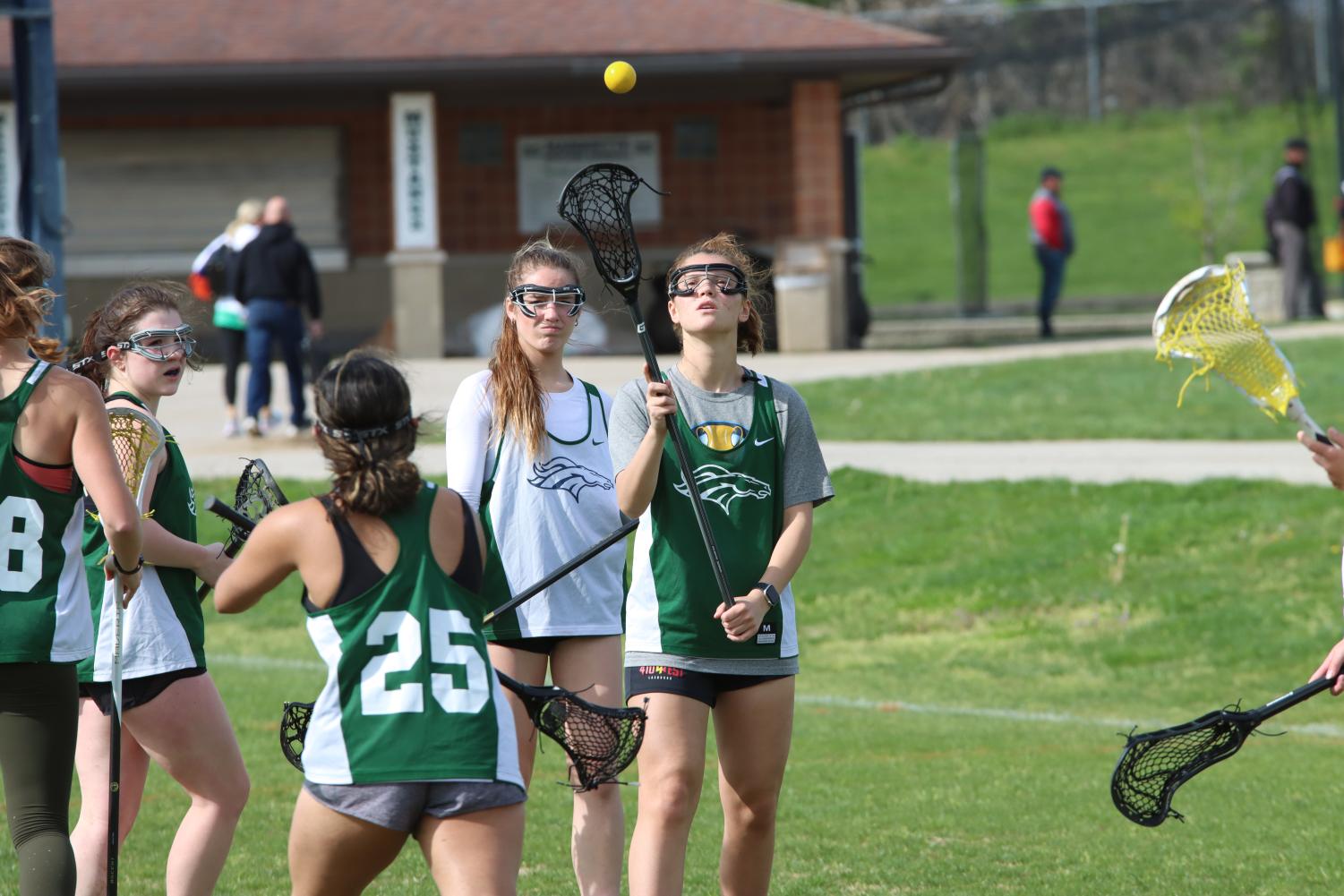 Audra Yoder, junior, catches the ball during a varsity lacrosse practice. Yoder is committed to play collegiate lacrosse at Rockhurst University, and has faced pressure from the recruiting process. (Media by Ben Hughes)

Audra Yoder, junior, catches the ball during a varsity lacrosse practice. Yoder is committed to play collegiate lacrosse at Rockhurst University, and has faced pressure from the recruiting process.

Time to Stress or to Decompress?

Athletes reflect on the mental consequences of participating in competitive sports

With a deep breath in and out, Omoye Ehimare, junior, squeezes her eyes shut and visualizes herself emerging victorious after passing the finish line at her track meet.

For Ehimare, this two-minute visualization trick she found off TikTok has calmed her nerves immensely, allowing her to perform better, she said.

“The most nerve-wracking part of the whole track experience is the mental stress and the lack of control that comes with it,” Ehimare said. “But being able to visualize me racing and having a pre-race ritual is a good way to have 100 percent control and manage my mental health.”

When people think about mental health, they automatically equate the cause to academics. But with athletes, people tend to shrug it off and tell them to work harder and focus more.”

As a MHS track and cross country team member, Ehimare said she has dealt with her fair share of mental pressure. She chose to focus her capstone in her Advanced English Language Arts Research Presentation 10 (ALARP) on mental health in athletes, particularly females.

“When people think about mental health, they automatically equate the cause to academics,” Ehimare said. “But with athletes, people tend to shrug it off and tell them to work harder and focus more.”

Student athletes tend to have an even harder time dealing with mental health ailments due to pressure from themselves, their parents and their coaches, Ehimare said.

“Athletes tend to place internal pressure on themselves, which, in the long run, leads to physical problems like eating disorders and major perfection issues,” Ehimare said.

With 35 percent of elite athletes struggling with eating disorders, burnout, depression or anxiety, according to a study by The American College of Sports Medicine, student athletes tend to face a different experience with mental health than their non-athletic peers.

As a freshman in varsity swim, Louis Chen said joining the varsity team was an eyeopener.

“Going into it, my expectations were high,” Chen said. “I thought I would place at every meet, but I didn’t perform as well as I wanted to, and a part of that was because I would get so nervous, which affected my ability to swim.”

“With the Olympics and the platform that a lot of athletes gave to mental health, I felt like it has started to finally be talked about more,” Chen said.

The Tokyo Olympics opened the discussion of mental health to the world after Simone Biles, a seven-time Olympic medalist, withdrew to address her mental health issues.

By learning from tactics to reduce nerves, Chen said he now listens to relaxing music and socializes with his friends before a meet to avoid thinking about others’ expectations.

Junior Audra Yoder, who plays varsity lacrosse and is committed to Rockhurst University, said she puts a lot of pressure on herself as a committed athlete.

“Because I’m already committed, there’s extra pressure to be better, or just be the best, which comes a lot with perfectionism,” Yoder said. “And, I put that pressure on myself and feel that pressure from my teammates when people acknowledge that I’m committed.”

From practicing 5 hours a day for three days and 1 hour and 30 minutes for the other two days, Yoder was injured her sophomore year with a stress fracture from cross country. Yoder couldn’t play for three months, she said, but the months after, both physically and mentally, were a different, challenging story.

How you play is also how you measure the majority of your self-worth.”

“It completely degrades your mental health because you’re so used to playing. You’re so used to exercising, and when that output is taken away from you, your world changes,” Yoder said. “How you play is also how you measure the majority of your self-worth.”

Yoder, however, also said she uses sports as a tool to deal with mental stressors.

“Honestly, with every issue I have, I deal with it by working out,” Yoder said. “Working out and putting my 100 percent into my sport is my outlet for stress relief.”

Leigh said he zones out others’ expectations and instead focuses on the activity he loves most: sports.

“I don’t let what other people say get to me,” Leigh said. “I just know what makes me happy as a person and focus on that.”

Kaitlyn Maloy, junior, said she witnessed many of her peers’ mental health intensify from sports, sparking her interest in mental health work. With six weighted classes, four of which are APs, and both club and high school swim, Maloy said she tends to be overwhelmed during the swim season.

“I’m a lot more mentally healthy outside of swim season,” Maloy said. “I know a lot of other swimmers with anxiety or depressive episodes during the season.”

Because of her experiences, Maloy said she has worked to put mental health resources on the RSD website, is a leader for Mustangs for Mental Health and interns for Arc Angels, a nonprofit aiming to prevent suicide in youth.

Maloy said she suggests that student athletes decompress after school and work on getting most of their homework done during school hours.

“I’ve seen, especially with the high school boy athletes, them not recognize that they’re vulnerable because we’re all vulnerable,” Meyer said. “We’re all human. We all make mistakes, but more and more, I’m seeing kids put more pressure on themselves.”

Especially for those injured, Meyer said, mental health can decrease significantly and hurt their confidence and health.

“It’s very difficult to manage the emotion of working so hard to play the season that you’re looking forward to, and then it’s just taken away,” Meyer said.

If they’re not well, emotionally or mentally, they hide that and put up a front. And again, when they feel all those things, they’re not sure how to unpack them or who to talk to, so it continually builds on itself.”

In his experience, Meyer said student athletes tend to put up a wall due to their pressures and avoid getting the help needed. At the college level, only 10 percent of athletes with mental illness seek help, according to Athletes For Hope.

“Mental wellness is invisible,” Meyer said. “If they’re not well, emotionally or mentally, they hide that and put up a front. And again, when they feel all those things, they’re not sure how to unpack them or who to talk to, so it continually builds on itself.”

Meyer said he works to support his student athletes as a coach, reminding them that failure is a normal and healthy part of life and teaching them breathing drills before practice.

He also said it’s hard to convince students to get the support needed.

“I’ve seen it so many times where the kids have let it get too big of a problem before they actually try to keep small problems small,” Meyer said.

Joseph Schoedel, health teacher, coaches boys swim and said he approaches mental health in a community by focusing on creating an encouraging environment.

Despite the negative benefits of sports, Schoedel said sports have more positives than negatives.

“Having a team also gives a place where kids can feel like they belong,” Schoedel said. “There are stressors of this sport but the community here definitely overrides any negatives.”

Mental health struggles are not a weakness by any means. In fact, it takes a lot of courage and strength to acknowledge mental health concerns and let other people know that they aren’t alone.”

“Mental health issues usually are not visible, but that doesn’t make them less interfering and less severe for an individual’s life,” Dr. Nickols said. “Like any physical ailment left untreated, a mental health illness can intensify quickly, so I think timely targeted treatment is vital.”

However, Dr. Nickols said that in his experience working with student athletes, sports tend to have both harmful and protective aspects.

Sports can both be protective with a community of eyes to help athletes but also they can intensify mental health issues from pressure and stress, Dr. Nickols said.

To help support student athletes, Dr. Nickols suggested that coaches be open about their experiences and show their humanity through their words and actions.

For students, Dr. Nickols said he recommends they be honest with themselves and let those close to them know if their mental health is deteriorating.

“Mental health struggles are not a weakness by any means,” Dr. Nickols said. “In fact, it takes a lot of courage and strength to acknowledge mental health concerns and let other people know that they aren’t alone.”