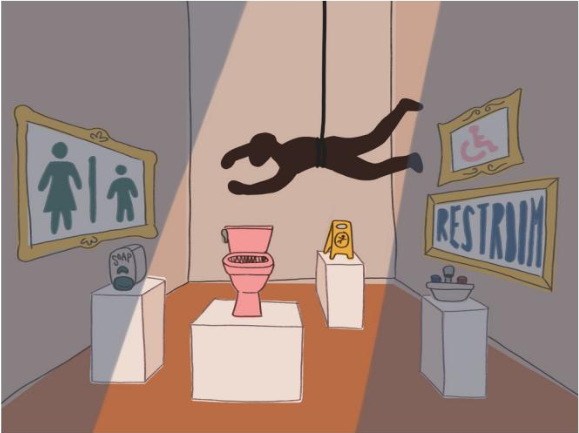 Students here and all around the St. Louis area have recently been vandalizing and trashing school bathrooms, motivated by a trend that has been circulating TikTok.

The “devious lick” challenge is a trend in which teenagers attempt to steal or destroy someone else’s property. Items such as soap dispensers, toilet paper rolls and even urinals are among the bathroom amenities teens have taken an interest in at schools.

At least two bathrooms at MHS have been vandalized. The custodial staff taped over bathroom doors to prevent students from disturbing them while they were cleaned, which caught the attention of many students on their way into school.

In addition to the time spent cleaning the bathrooms, the damage comes at a cost and is illegal. ”

The damage has forced the custodial staff  to clean up these large messes which diverts their attention away from their day-to-day priorities.

Because of COVID-19 administrators, teachers and other staff have had to work harder to keep students safe while also prioritizing their main job of providing an environment that makes students excited to learn and want to come to school. Hitting a “lick” on a bathroom stall makes the school day less enjoyable for everyone.

Restrictions on all students’ ability to use the bathroom have also been implemented in an attempt to prevent the “devious lick” issue, despite only a few individuals being involved. Bathroom breaks, specifically during Academic Lab, are now timed and limited to five minutes with the threat of removing bathroom privileges if the time limit is violated.

In addition to the time spent cleaning the bathrooms, the damage comes at a cost and is illegal.

Though we understand the desire to keep up with the constant push of new ideas via social media, the line must be drawn at the destruction of property and vandalism. It is counterproductive to the learning environment that school is meant to be. These new trends are no longer amusing; they are criminal offenses.

Before students hit record, they should consider whether their post is comedy or destruction and what possible consequences their post could have on others and their future selves.