Andrew’s Approach: Amidst all the turmoil in the district, Board candidates Morrell and Mondl are the best bet for the future

Unfortunately, the Rockwood school district is no stranger to controversy. We seem to have happed onto some more turbulent times, and to no fault of the citizens. The district’s first state audit, just released this month, gave our beloved district a less-than-flattering review. A review, in fact, that included fund mismanagement and blatant conflicts of interest.

When such situations arise, fault needs to belong to someone. And while there is certainly no one person that is to blame, one cannot deny negligence of our school board. In the April 2 election, two members stand for re-election again two newbies. It is my hope that incumbents Janet Strate and Steve Banton get unseated. Newcomers Loralee Mondl and Jeffrey Morrell should get the go ahead.

Strate and Banton are not the ones to make the district’s outlined changes. As part of the School Board, those two were not as careful as they needed to be with money that wasn’t theirs. The fact that they needed a state audit to wake them up is reason enough to have them removed.

At the March 5 candidate forum, School Board President Strate defended the Board’s actions by stating that construction contracts were all reviewed thoroughly by the board and Glenn was usually a good decision because they knew the buildings well.

This sentiment is understandable, but again, the audit correctly states that bids need to be taken more seriously to find lower rates for taxpayers.

That leaves voters with two candidates for two seats. Those candidates are teacher Loralee Mondl and Business Executive Jeffrey Morrell. Both of these candidates bring something to the table that is badly needed.

Take, for example, Jeffrey Morrell’s business experience. Certain administrators love to say how Rockwood shouldn’t be run like a business, but I don’t think that sentiment takes into account the purpose of a business. A business naturally churns
out the best product it can at the most efficient cost.

And God knows in this district, a little financial efficiency certainly wouldn’t hurt.

Loralee Mondl was a teacher at MHS, and has been a volunteer in the district for more than a decade. She can bring the fresh, new education aspect to the board Morrell may not have. Having an “administrative outsider” on the Board would be very beneficial to the district.

Have as much faith in the School Board as you want, but when push comes to shove, Rockwood needs some new blood. Morrell’s business experience and Mondl’s teaching and district involvement is certainly a better combination than a couple more “administrative insiders.” 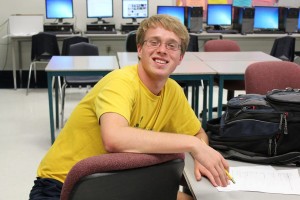 Andrew is seasoned veteran of the newspaper.  This is third and final year on  staff as a senior.  Andrew participates in NHS, Young Conservatives Club,...

Andrew’s Approach: Amidst all the turmoil in the district, Board candidates Morrell and Mondl are the best bet for the future