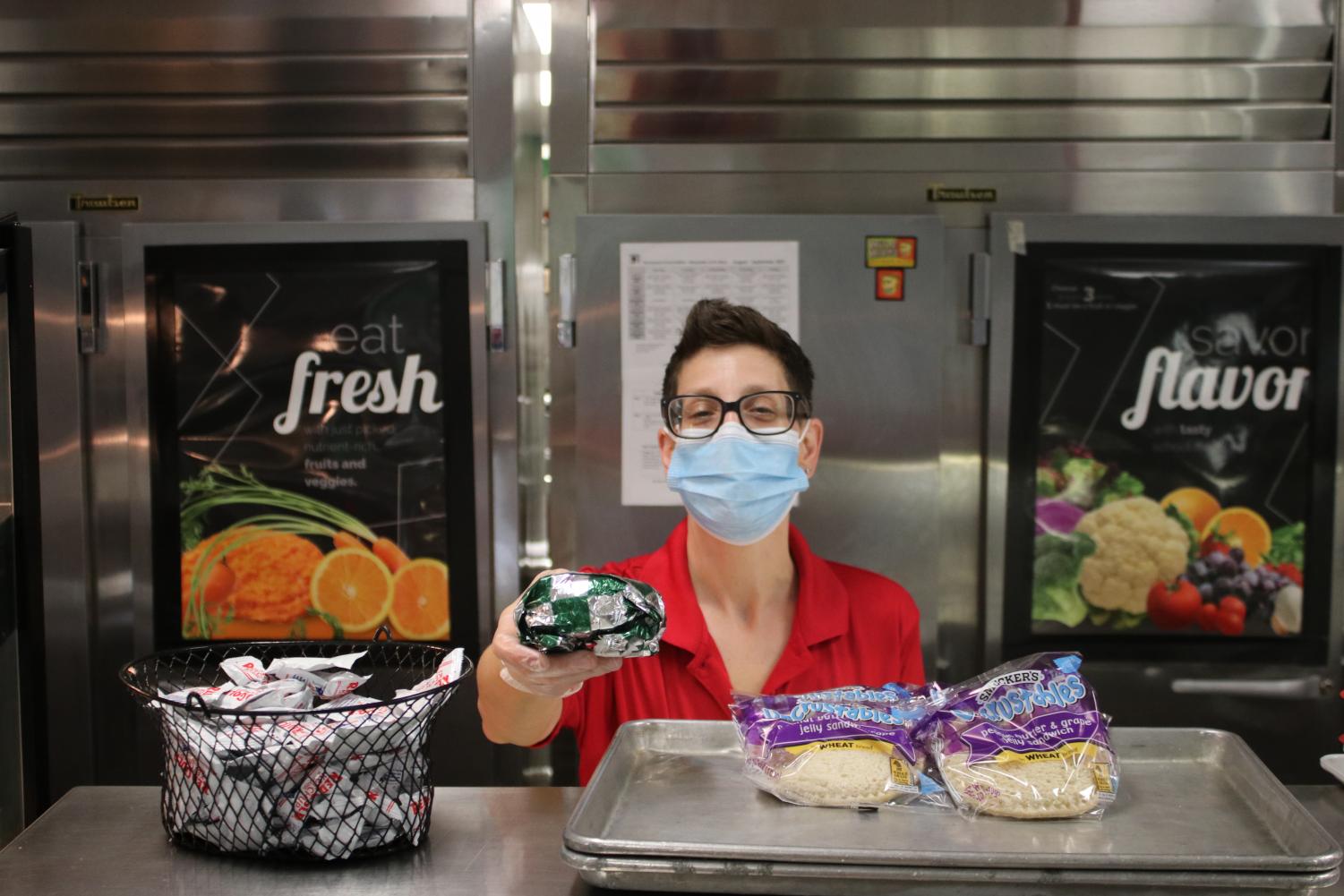 An MHS cafeteria worker hands out lunch to students during the shortage of cafeteria staff. (Media by Shyam Punnachalil, Jacob Robinson)

An MHS cafeteria worker hands out lunch to students during the shortage of cafeteria staff.

As RSD returns to its first full in-person school year since COVID-19, staff shortages have affected departments including transportation, substitutes and nutrition.

Following a national trend, there has been a shortage of bus drivers in RSD resulting in fewer buses and longer routes.

Freshman Principal Dr. Daniel Ramsey, who oversees transportation at MHS, said the district is constantly on the search for new drivers. These potential hires must have a commercial driver’s license (CDL).

“There’s a lot of training that has to happen from the time somebody’s hired to the time they first drive a bus,” Dr. Ramsey said.

Not only has this shortage caused morning and afternoon delays, but it also has affected the sports teams’ ability to get to games.

RSD offered coaches the opportunity to take an eight-week course to earn their CDL to make transporting teams easier.

Joseph Schoedel, swim and dive coach, said he knew right away this would not be for him.

“I coach two of the three seasons,” Schoedel said. “It didn’t really sound something very appealing to me.”

Mike Heyman, transportation director, said RSD usually hires seven to nine transportation employees each summer, with about five per year retiring. This year, even with RSD being one of the highest paying bus driver employers in Missouri, there were no applications, and even more retired than normal.

Heyman said there were 182 bus drivers in RSD five years ago when the decline started. Last year, there were 168, and this year there are 124 drivers, making this the most severe driver shortage in RSD history.

While RSD was virtual, some drivers got other jobs they still have now. Others don’t feel safe driving students due to COVID, Heyman said.

If a staff member refers a bus driver that stays for 60 days, that staff member will get a bonus of $1,500 with no limit to the number of people they can refer. The system has been in place for four years, but recently the reward money was increased from $500 because of the severity of the shortage.

This reward system, however, has only been used about 11 times since it started.

Heyman said he is optimistic they will fix the problem. They need about 35 bus drivers by next year to mostly fix the shortage.

“We can’t provide all the services that we used to do, that the parents enjoyed and that the students enjoyed,” Heyman said. “That’s disappointing to me because that’s not how I want my department to be run.”

All field trips that are not a required part of the curriculum have been suspended this year due to a substitute teacher shortage.

Kallie Fisher, senior, is in Human Anatomy, a class that traditionally takes a field trip to see a cadaver dissection, but due to the sub shortage, they will not go this year.

“Just doing something on paper, seeing it over Zoom, isn’t going to be the same as actually seeing it,” Fisher said. “There’s that disconnect.”

Principal Dr. Steve Hankins said he also is disappointed teachers will not be able to have this addition to the learning within their class.

Dr. Hankins said a large portion of the sub pool is older, and many did not feel comfortable returning to such a large school environment. However, as the number of teachers calling in sick increases, so does the number of subs needed throughout the school.

Often last-minute fill-ins are covering classes. Other staff members and even hall monitors are also stepping in to cover for teachers.

“Everyone’s kind of chipping in where they can,” Dr. Hankins said. “It calls for all of us to have to do more in order to make the same process happen. It puts stress on the system for sure.”

Carmen Fischer, director of Child Nutrition and Warehouse, said the labor shortage in the cafeteria has never been this bad.

“I only have three people,” Fischer said. “It’s really hard on my staff and we’re all getting tired but we’re trying our best.”

Fischer serves as a director, but due to the shortage, she is now serving as a cafeteria worker.

“A lot of my own office staff is working here,” Fischer said. “Mostly everyone has other jobs whether it be at the warehouse or from the Child Nutrition office.”

Although the lack of cafeteria staff has always been an issue, the problem has gotten much worse with more than 50 open positions throughout the district, Fischer said. Last year, MHS served approximately 600 to 900 students, but now serves 1,300 students while short-staffed.

The primary catalyst of the issue is COVID, the high workload and previous workers leaving for office jobs, Fischer said.

However, volunteers from the Parent-Teaching Organization (PTO) are planning to help out and other possible solutions are being investigated.

Dr. Keith Kinder, Board of Education (BOE) member, said the shortages in RSD will be resolved when the COVID situation gets better.

“It would be nice if we could convince people to come back and give everyone a reward,” Dr. Kinder said. “But there is only so much we can do.”

As the universal shortage is a nationwide issue, Dr. Kinder said RSD is looking for inspiration on solutions from other schools.

“We are still trying to find innovative ways to get back to normal,” Dr. Kinder said. “As of now, we are trying something that we could do a bit differently every day to get it to a better point.”

“We’re offering signing bonuses for our bus drivers. We’re offering packages and benefits for full-time workers in other areas. But people just aren’t applying,” Dr. Ricker said. “So we are hoping and looking to get creative in this emergency situation.”