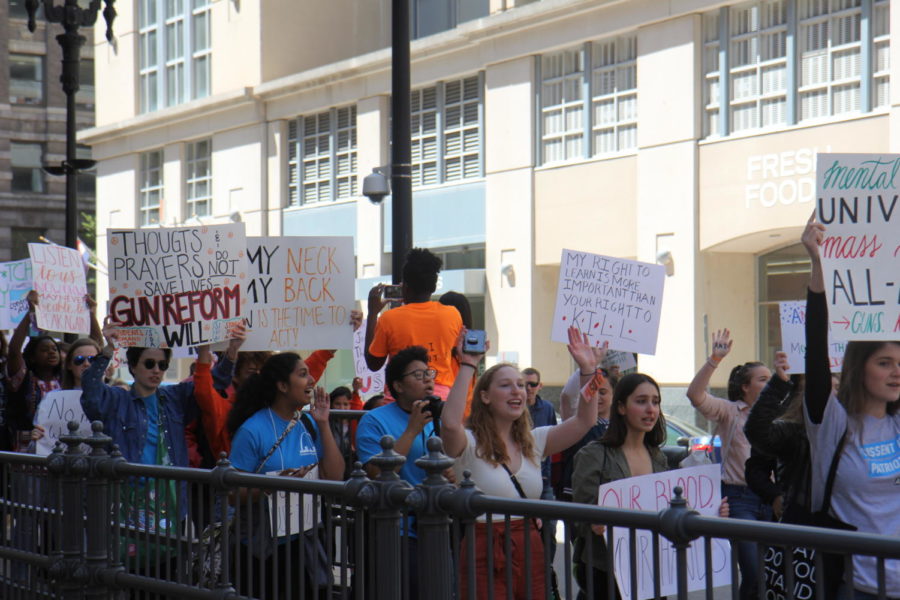 Students hold a rally outside Missouri Attorney General Josh Hawley’s office to protest his affiliation with the National Rifle Association (NRA) and the lack of legislation regarding the purchasing and usage of firearms.

When Tali Gorodetsky, junior, was at a religious convention the week of Feb. 14 her friend got a call from his parents, telling him that his cousin, Jamie Guttenberg, had been killed in the shooting at Marjory Stoneman Douglas High School in Parkland, Fl.

“It’s easier when you don’t know a person affected by it and not do anything about it,” Gorodetsky said. “After that, I saw that his life will never be the same. He will never get his cousin back, his family will forever be changed, and it’s up to us to make sure that doesn’t happen again.”

Last Friday, SDASTL held a rally outside Missouri Attorney General Josh Hawley’s office to protest his affiliation with the National Rifle Association (NRA) and the lack of legislation regarding the purchasing and usage of firearms.

Gorodetsky said SDASTL had been organizing the rally and spreading the word since early February to help perpetuate the message of the March for Our Lives in March, coined by survivors of the school shooting in Parkland. SDASTL included 22 schools, including two colleges: St. Louis University and Washington University in St. Louis.

So, she helped plan the rally, and outreach began. The group has mainly advertised the movement through social media, Gorodetsky said, to help steer the idea to students.

During the first-hour walkout at Marquette, another school shooting occurred at Forest Hills High School in Florida. There was one injury, and the suspect was taken into custody.

“It just goes to show that we were outside walking for this exact issue and it happened,” Gorodetsky said. “It happens everyday, and that one person’s life will never be the same again.”

So, a mix of students from all over the St. Louis area who wished to support the victims of the Parkland shooting and advocate for gun control showed up at Hawley’s office in downtown St. Louis, including Sophia Hultberg, sophomore.

“I honestly don’t feel that safe at Marquette,” Hultberg said. “And I’ve always stood for what I believed in, so seeing all these people here proves that we really do have a strong voice, and are truly trying to fight back on an issue that some older politicians don’t want to talk about.”

Hultberg mentioned that she felt that while Superintendent Dr. Knost’s take on the protest and walkout wasn’t favourable, she appreciated Dr. Mathison’s understanding of the students who chose to participate.

“I’m here today because I want to make a change in our world,” Hultberg said. “I don’t think that the school should be trying to shut that down.”

Community members also attended the protest at Hawley’s office on Friday afternoon. Becky Morgan, a member of Moms Demand Action (MDA), has been involved in advocacy for gun control since the shooting at Sandy Hook Elementary School.

“A week or two after Sandy Hook, a group of us went to Senator Roy Blunt’s office and really tried to push through the background check bill,” Morgan said. “When that failed, it really propelled me to stay involved.”

Morgan said that coming together as a community was truly important when dealing with issues like these, and came to the protest to show her and her group’s support for the student protesters.

“I really wanted to turn out and show the students that moms, and Moms Demand Action, support you, and we support your work,” Morgan said. “We want to be right here standing with you, and help however we can.”

Morgan mentioned that she was far from surprised at the turnout at the rally, which included more than 40 schools.

“I think enough people care about this issue for there to keep showing up, stay involved, and turn things around in November,” Morgan said. “Until politicians see crowds like this, see people talking about issues, they’ll think they’re free to do as they wish. Showing up in masses repeatedly is so important.”

Izzy Essman, senior at MICDS, said she joined SDASTL and their efforts to plan the rally very casually.

“I was in a group chat, and I got a message from Sunny Lu [sophomore at Ladue Horton Watkins High School] asking if anyone wanted to help her plan this rally on April 20th, and I said sure,” Essman said. “And all of a sudden, I was a part of Students Demand Action.”

Because Essman is a part of a private school, she said getting students together who were able to walk out and take time out of their school day was difficult, so she came to help speak for those who couldn’t attend.

“Thankfully, I had the time and the abilities to take my caring further than just talking about it,” Essman said. “I could take the time out of my school day to come here and protest.”

Essman also mentioned that the administration’s approach to handling the walkout and a few students coming to the rally was understandable.

“The administration wasn’t overly supportive, which we understand, since we do go to a private school,” Essman said. “They couldn’t really take a political stance, but they were very accomodating; I’m just glad that they allowed this, that they didn’t stop us, because other students haven’t been so lucky.”

Essman said that, overall, she feels lucky to be able to show up and stand up for her beliefs, and that there is a platform for other St. Louis area students to do the same.

“We’re tired of waiting for the adults to fix things, and we’re taking matters into our own hands,” Essman said. “As for the SDASTL itself, I think we’re more organized than people expect us to be, and we are ready to unite throughout the city and work together because this is something that scares all of us.”

Another community member, Abram McGull, had been buying Diet Cokes for him and his wife when he saw the crowd of students around Hawley’s office. Intrigued, he came over for a look at the commotion.

“I was over at the store, and I just happened to see the march,” McGull said. “I thought it was a very cool thing, and a part of the democratic process for change. These students are doing the right thing; when they want change, they try to make change through peaceful protest.”

McGull said that when he came over to look at the protest occurring, he didn’t expect to come across this many people.

“I saw on the news that protests were taking place across the country, and I’m so proud to see so many Missouri students here protesting and showing up as a mass force to show their feelings about gun regulation,” McGull said.

McGull also mentioned that he believed that peaceful protest, and support from community members for the students, was a key part of creating change.

“This is your country. We need to know and fashion what kind of country we want to live in,” McGull said. “Gun violence has been an issue in this country for many years, and my hope is that students realize that the democratic process of protesting and showing their feelings will actually get elected officials to do something the people really want.”

Evan Del Carmen, senior, attended the march because of his beliefs opposing the NRA.

“The NRA is a terrorist organization that funds the slaughter of children, and I will not stand for that, and neither should our politicians,” Del Carmen said.

Del Carmen said it’s important for students to get involved in activism because the 18 to 34 age range is the most underrepresented age range in politics. If the large population of this age group uses their power politicians will be forced to listen to their constituents rather than following the money.

Del Carmen said while the turnout at the rally is something, it is not nearly what it should be.

“Our generation is seen as being weak and refusing to take action, instead of being seen as that maybe we should be the generation that even more than embracing change drives change,” Del Carmen said.

Del Carmen said his message to the MHS students who didn’t participate in the walkout or rally is that they have to put their money where their mouth is. If they say they are against the proliferation of guns in America, Del Carmen expects to see them protesting regardless of whether they have testing that day or not.

Del Carmen said he wants students to stand up for their beliefs – even if they differ from his own.

Susie Saxon, junior, said showing up is especially important as a student at MHS, a predominantly white, wealthy school in west county because they have more power given to them by default in comparison to those who have been fighting gun violence in the past. She said students should use their privilege to help enact positive change since they have the opportunity.

Two counter-demonstrators were vocal about their opinions were on the rally. One man made his way through the crowd and yelled in the faces of rally organizers whilst flipping them off with both hands. He was removed by police while organizers told demonstrators to, “remain respectful.” Another man yelled, “No one died at Sandy Hook!” from the opposite side of Olive Street.

Serena Freese asked police if she was allowed to counter protest. Freese said she is a legal gun owner who knows her constitutional rights, and that she was frustrated by the younger generation’s lack of understanding.

“They [student demonstrators] don’t understand that if your guns are taken away, then you become a country or civilization that has defenseless powers towards the government, or a criminal that would break into my house, or break into my families house to hurt or kill them,” Freese said. “With me having a gun at my house, I would be able to defend myself from someone coming in.”

Freese said demonstrators should be protesting the laws themselves. She said there need to be stricter punishments for criminals who commit mass murders.

“Death penalty. None of this life without parole, the laws need to be stricter,” Freese said. “And I think if a person knows that the death penalty is gonna be there and that they’re not doing life in prison, turn it into a speedy trial to where you’re not on death row for 10 to 12 years, maybe people would think twice.”