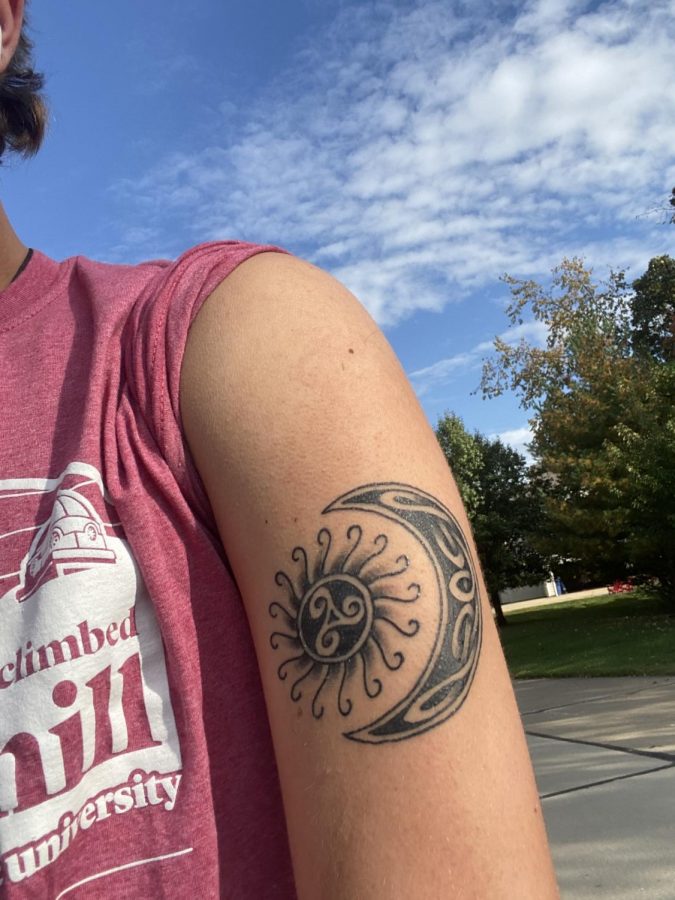 Andrew Messina, senior, gets a tattoo in remembrance of his late uncle. “I want to still keep that tattoo that was his alive and that memory of it, you know that my family has alive,” Messina said.

Paige Mathys, senior, has two tattoos: a geometric pineapple on her ribs and a date in Roman numerals on her wrist.

These tattoos are more than just ink, they are in remembrance of her late mother.

Mathys said her mother passed away in 2016. She said she didn’t have a super close connection with her mother because she had cerebral degeneration, which is a condition where nerve cells in the cerebellum deteriorate and die.

“Losing a parent is something no one should ever have to go through,” Mathys said. “We moved houses and so when we moved houses my mom was sick for awhile, so we got rid of a lot of her stuff, so I don’t really have a lot. The things I did have, I like to cherish and hold on too.”

One item she cherished was a geometric pineapple necklace from her mother that broke, so she decided to get it tattooed on her body.

The other tattoo Mathys has is the year her mother was born and the year she died.

“Necklaces and jewelry and pictures are all temporary, but this is going to be with me until I grow old. It is a way to connect with her,” Mathys said.

Mathys plans to get another tattoo. She said she has struggled with mental health for a long time. She wants to get something green because it is the mental health color and the phrase “it doesn’t define you.”

“I think if you want a tattoo you should get it,” Mathys said. “I don’t think it has to have a certain meaning. If you think something is cool and you like art and you want to put something else on your body that you drew or someone else drew and you think it is really cool, you should be able to do it.”

Jason Winter, choir teacher, has a few tattoos himself. His first tattoo is an abstract wolf on his arm, based on an encounter he had with a wolf when he was a child.

Winter said he was in the woods playing with one of his friends and they somehow got separated. Winter fell off a five-foot drop onto his face, and looked up and saw a wolf about 20-30 feet away. The wolf then turned around and walked away.

He heard about all of these horror stories of wolf attacks and decided to do some research. He found that wolves, contrary to belief, are shy creatures. Winter said in high school he started volunteering at the wolf sanctuary, and realized the things we hear about people and animals aren’t always the truth.

And I think more than anything, like with my brother, it’s like I’m carrying him with me.”

“Something that stuck with me is how I treat my interactions with people,” Winter said. “As a teacher, if I hear a story about a student that some teachers struggled with, you know I take that with a grain of salt and want to meet that student and have an opportunity to develop a relationship with that person.”

On the same arm, Winter has more artwork that commemorates his late brother: a New Orleans street lamp, a cigar and a beer glass.

Winter said the New Orleans street lamp represents one of his brother’s favorite places to visit. For the cigar, Winter said it relates to a story of when his brother, his cousin and other family visited him for his college graduation, and that specific portion of the tattoo also reflects his grandpa.

There is a certain beer his brother used to drink that would come out the day after Thanksgiving every year, and it was a tradition between the two, Winter said. On the beer glass itself, there is a marking etched that is the tattoo his brother had on his shoulder.

“And I think more than anything, like with my brother, it’s like I’m carrying him with me,” Winter said.

On his other arm, Winter has a cross that represents his relationship and journey with faith.

Ever since Andrew Messina, senior, was five years old he knew he wanted to get a tattoo. When his 18th birthday rolled around he started that discussion with his parents. Messina and his parents agreed he could get a tattoo as long as he paid for it, and because the main reason why he wanted the tattoo was in remembrance of his late uncle.

Growing up, Messina’s uncle was always around and they had become very close, but even closer when his uncle was diagnosed with cancer. Messina said he always remembers when his family would go to the beach, and he would always notice his uncle’s tattoo. When his uncle died, he knew exactly which one he wanted to get.

Messina got the same exact tattoo as his uncle but in black and white while his uncle’s was colored. Messina said his tattoo is like a tribal symbol and has a sun with a crescent moon around it and inside the sun is a triscalade, which is a Buddhist symbol.

“I want to still keep that tattoo that was his alive and that memory of it, you know that my family has alive,” Messina said.

In the tattoo, the sun and moon represented a balance of nature, and the triscalade was a symbol of any set of three such as father, mother and child or alpha, beta and omega, Messina said.

“In day-to-day life, you know, things can hurt you, you know, words, people just certain things can screw with your day,” Messina said. “This tattoo is kind of a reminder that, no matter what happens there’s always a balance between things and you need to find that balance to be happy.”

Katie Schuermann, sophomore, was planning on getting a tattoo with her mother and sister as a way to bond. Her sister changed her mind last minute, so her mom didn’t get one either, but Schuermann got a tattoo anyway.

Schuermann got a semi-realistic mountain range with five peaks on her ankle. Schuermann said her tattoo didn’t have any specific meaning behind it, but thought it was cool and matched her foresty aesthetic.

Schuermann was torn between the mountains or a compass, but decided to go with the mountains because it was the safer and least regrettable option. Schuermann said she has no regrets with the tattoo.