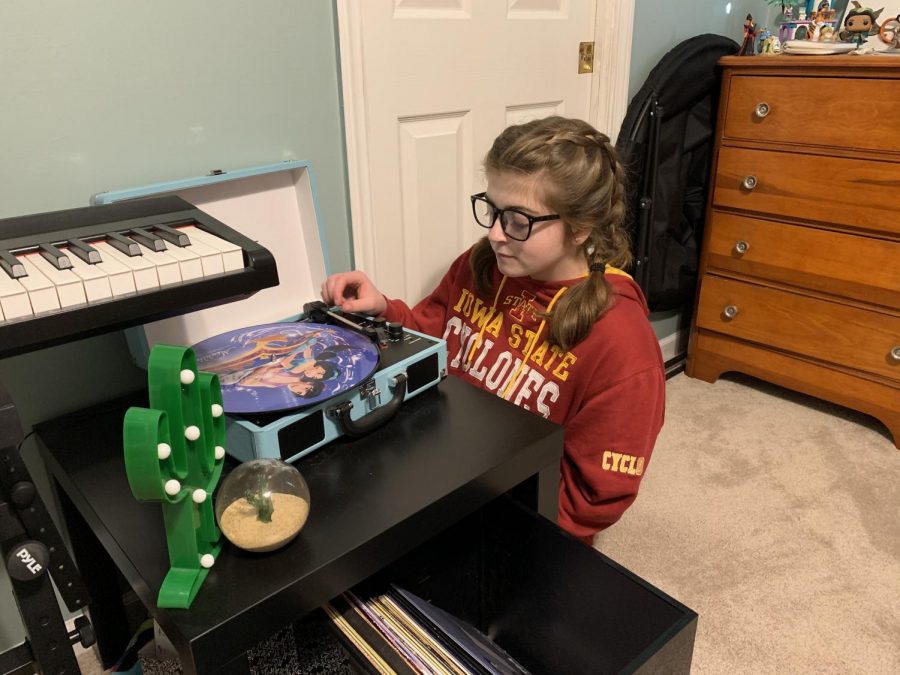 Annika Haas, senior, listens to music and plays violin, along with other instruments, as a creative outlet for mental health. She turns to Spotify Music or her vinyl record player to find songs that represent and elevate her current mood. “I have a lot of anxiety, so especially this year, music has really helped me understand that everything will be alright,” Haas said.

Annika Haas, senior, was often consumed by anxiety and unbalanced priorities. She tried breathing, among other techniques, that failed to ease her mind. Her sophomore year, she discovered an outlet to improve upon her emotional and mental health: music.

Setting aside time in her schedule to listen to sentimental nostalgia—from The Beatles to The Beach Boys—Haas found music provided a well deserved stress reliever from the woes of high school, college preparation and extracurriculars.

“When I’m listening to music, it is like I am in a different reality,” Haas said. “You can really feel the instruments flow through you and make you feel either happier or sadder. I can sometimes feel what the singer is going through just from the instrumental aspects of a song.”

Alone with her record player, Haas said music has helped her think through difficult situations and enhance her relationships with others. Her listening sessions are up to an hour long and have provided an essential basis for Hass to increase her emotional stability and self-expression.

Haas, like many others, has used creative arts as tools for therapy and to alleviate stress and mental health challenges.

Music and art have been proven to help people alleviate pain, decrease symptoms of stress, express their emotions and improve overall well being, mental health and quality of life, as stated in studies and research from the National Institutes of Health.

Music therapy is defined as the clinical and evidence-based use of music interventions to accomplish individualized goals within a therapeutic relationship by a credentialed professional, according to the American Music Therapy Association. Interventions for mental health concerns use musical interaction as a means of communication and expression.

Rachel See, MA, MT-BC, is a music therapist for the Special School District (SSD) that served MHS. In high school, See witnessed her grandmother’s memory and speech production deteriorate when she was diagnosed with Alzheimer’s disease. See said when she played music, her grandmother remembered lyrics and sang along, like she was restored to her old self.

“When you look at an MRI while playing music, the entire brain is affected,” See said. “There’s some inherent qualities about music that can help them retain information and feel motivated where other mediums might not help them otherwise.”

See said music therapy services are versatile and can be found in places such as Neonatal Intensive Care Units (NICU), nursing homes, rehabilitation centers and schools.

In SSD, See works with students to meet their Individualized Education Plan (IEP) goals that may center around anxiety, self-image, self-esteem and interpersonal relationships. Music therapy also aids in social-behavioral, basic cognition and attention goals, especially for students on the autism spectrum.

See said an aspect students enjoy about music therapy is the feeling of security and relief associated with the familiarity and predictability of music, which students may be craving during an unprecedented global pandemic.

“Letting them choose a song, have a control over how the music sounds, how they are singing or what they want to say in a song can really be powerful,” See said.

From guitars to chimes to boomwhackers, See uses music as a regulation and relaxation tool, allowing students to serve as a less intimidating way for students to communicate and come out of their shells while addressing their non-musical needs.

Letting them choose a song, have a control over how the music sounds, how they are singing or what they want to say in a song can really be powerful.”

See adapted to using online music tools and sharing Zoom screens to do songwriting and lyric analysis with her students, but she said virtual sessions help them be more comfortable in their home environment with family and express their emotions.

“Everytime I find out a student said their first words in music therapy, it reminds me of how important music therapy can be when you are helping a student find their voice,” See said. “There are countless stories and interactions I’ve had with students that give me just as much back. This is a job that is very reciprocal—they give me hope, inspiration, and joy.”

Abigail Kaber, senior, said her therapist recommended she try art therapy techniques outside of therapy for her anxiety and seasonal depression. She said she practices art such as paint-by-numbers and diamond paintings after school three times a week.

She said doing art has helped her to better prepare for her intermittent depressive symptoms and it allows her to start fresh on a new slate, or canvas, when she needs an escape. She said painting outside of her therapy sessions makes it easier for her to focus on what she could control when the coronavirus pandemic caused financial strains for her family.

“The first time I did it I was frustrated by it. If anything it hurt me more than it helped,” Kaber said. “Once I finished the first one, I felt an overwhelming sense of pride and joy to create something that looks beautiful. It was a complete relief for my anxiety and all my negative emotions. From there, I haven’t doubted how it works since.”

Kaber said her art practices influenced her creativity in other areas, including her wardrobe, as she began to feel more confident in herself and reflect visions from her art into more colorful outfit choices.

Dr. Gussie Klorer, ATR-BC, LCSW, LCPCMA, is an art therapist and author of the psychology book Expressive Therapy with Traumatized Children. She said there are therapeutic benefits to doing art, especially coloring books, even though they alone do not constitute art therapy without a board-certified art therapist.

Dr. Klorer said art therapy is using art as the primary means of expression, which goes along with counseling. She uses two and three dimensional materials such as clay, oil pastels, paint and incorporates poetry and movement into her sessions.

“You help clients to express themselves in whatever way works best for them and then you understand what it is they are feeling that they may not be able to articulate but would come out in their artwork,” Dr. Klorer said. “It gives you an avenue to help them understand themselves and their feelings and work through what they are struggling with.”

Dr. Klorer said art therapy can be used to treat an almost limitless array of issues from depression to traumatic brain injury, and it can be used for all age groups. She said it is amazing to see how art taps into emotional expression, especially for emotions that are not easy to articulate.

It gives you an avenue to help them understand themselves and their feelings and work through what they are struggling with.”

Dr. Klorer said an example of this is when she worked with a client for 5 years from age 12-17 as he progressed through the foster care system. She said in his first session, he did not say a word and refused to speak about his troubled at home life. He only ever made one piece of art, she said, and he took multiple sessions to create a wooden box, covered in sandpaper, nails and protruding toothpicks, on which he sealed his scribbles and feelings about his abusive family.

“He made this ugly piece of art that symbolized some incredible feelings he couldn’t talk about,” Dr. Klorer said. “That was such a powerful piece for him, and he realized it was a safe place for those feelings. It made all the difference for him, and the art did all the work because it was too raw to talk about while he was living through it.”

She said teenagers are at a point of peak creativity in their lives and make for great clients because they have creativity and insight that allows them to naturally, and sometimes unconsciously, express themselves through art and find a deeper meaning in their creations.

Pranav Nagila, senior, said after his friend passed over a year ago, he realized how impactful stress could be on one’s mental and emotional health. He struggled with anxiety since his freshman year and after trying other outlets, he researched how art could serve as therapy.

Nagila said he had a negative mindset and view of himself, yet he was unable to see an issue with his self-dissatisfaction. Once he began drawing daily, he was on a path for self-improvement, and he turned his notebook into a story-like stream of consciousness.

As I progressed, I would start drawing more meaningful memories or the biggest moment from each day, whether it was good or bad.”

“Originally I would be drawing random, insignificant doodles and took art with a grain of salt because I didn’t consider art to be therapeutic,” Nagila said. “As I progressed, I would start drawing more meaningful memories or the biggest moment from each day, whether it was good or bad, so I can have a better concept of where I should go from there.”

Over the years, Nagila said using art therapeutically lent him more than social anxiety relief as he became more open with his friends and gained confidence talking about his feelings of stress, insecurity and self-comparison.

Nagila said as a second generation immigrant, he sees that the Asian and Indian culture rooted in his parents’ generation does not put enough emphasis on mental health concerns, especially for others his age.

He said the MHS community could do more to help students like him who were or still are passive about their mental health even though they are struggling.

“If you’re stressed right now, it is so blinding that your future feels impossible to get to, then you have to address that now,” Nagila said. “I kind of convinced myself that it doesn’t matter how I feel and just needed to move on. Improving mental health seems really optional, and it shouldn’t be, because everyone has to take care of themselves.”