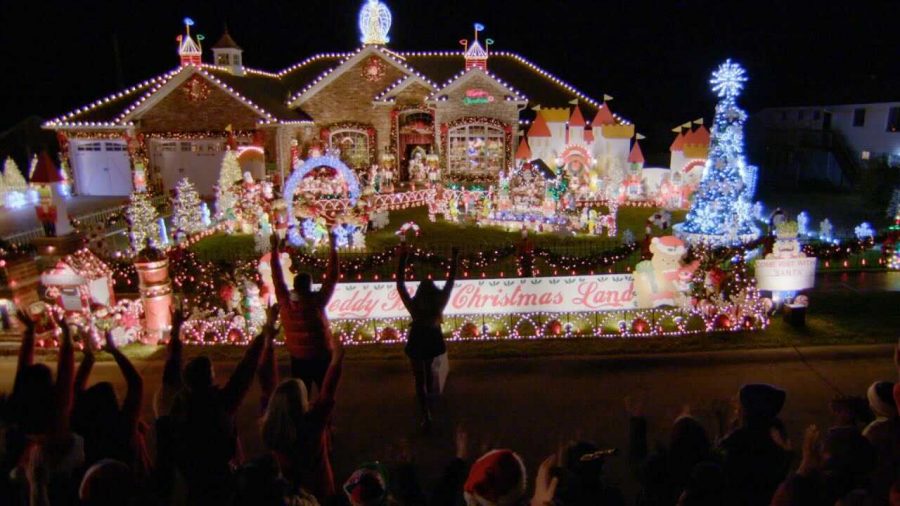 Sophia Marciano, junior, volunteers at the Trevisano family home. The family dresses up as Christmas characters, Marciano as an elf, and kids interact with them as they raise donations for the St. Patrick’s center. Recently, ABC’s Great Christmas Light Fight show filmed the exterior decorations.

Strolling through a worn-down pathway of grass to her neighbor’s house, Zoë Malik, senior, smiled as she envisioned a day full of festivities. With each stride, Malik recalled joyful memories from previous years on this highly anticipated day: Christmas.

Upon arrival, Malik began the Christmas celebrations with cookie decorating and gift-giving.

Malik, who is Muslim, wasn’t the only one to indulge in the holiday spirit.

Nearly 9 in 10 Americans celebrated Christmas in 2019, according to a Gallup poll. The holiday is one of the most celebrated days of the year with 81 percent of non-Christians participating in Christmas activities in the U.S., according to the Pew Research Center.

As a Muslim, Malik said her family participates in the non-religious aspects of the holiday season with her neighbors as a tradition. The celebrations include gift-giving, cookie decorating and an occasional “Secret Santa.”

Also, the Maliks travel to Florida during Winter Break to engage in the holiday festivities in a warmer climate.

“Because I’m Muslim, Christmas isn’t our holiday per se since our holidays come earlier in the year,” Malik said.

For Malik, the Muslim holidays of Eid and Ramadan are more family-oriented holidays than Christmas. During the Islamic month of Ramadan, Malik fasts from sunrise to sunset and ends the month with the celebration of Eid.

“Christmas, it’s fun, but I feel like I’m more watching on the sidelines,” Malik said. “It’s not as much family-oriented.”

Christmas, it’s fun, but I feel like I’m more watching on the sidelines. It’s not as much family-oriented.”

Many Americans celebrate the secular aspects of Christmas due to the commercialization of the season, and Malik said this aspect brings about more participation and joy and makes the winter season more welcoming.

“The fact that it’s a little commercialized means that everyone can participate in all the different things and not worry about the religious part of it,” Malik said.

However, she said her perspective on celebrating Christmas is different than her other Muslim friends because she has a Pakistani father and Danish mother.

As a Hindu, sophomore Rohan Devraj’s excitement behind the fast- approaching Christmas season can be summarized in one word: presents.

“It’s the fun part of Christmas, and waking up and opening them were the best memories that I have from the season,” Devraj said.

Devraj said he no longer requests or receives gifts, but it is a major part of the Christmas season that uplifts people’s moods.

Although Devraj continues to partake in various activities such as putting up a tree and setting up Christmas lights, he maintains his own religious traditions by participating in Hindu and Indian festivals.

He said some Hindus in his community assimilate into Christmas festivities but do not necessarily forget their own culture and religious practices.

“It helps people from all different cultures and religions experience and get a feel for what Christmas and what the holiday season is like,” Devraj said.

Hanukkah is really not a very important Jewish holiday. Because of its proximity to Christmas, it’s become one of the few most people know. That’s a way Judaism has assimilated to the predominant culture.”

Russell Gottlieb, math teacher, practices Judaism. He said commercialization is an important tool for the economy because the toy, game and merchandise industries depend on it for a profit. On the other hand, he said it is not beneficial for those who celebrate religiously.

Gottlieb said the commercialization of Christmas also has affected a well-known Jewish holiday, Hanukkah, a festival that reaffirms the ideals of Judaism and commemorates in particular the rededication of the Second Temple of Jerusalem, according to Britannica.

“Hanukkah is really not a very important Jewish holiday,” Gottlieb said. “Because of its proximity to Christmas, it’s become one of the few most people know. That’s a way Judaism has assimilated to the predominant culture.”

Although Gottlieb does not celebrate the Christmas holiday religiously, he said Christmas does raise people’s spirits.

Nandita Sathees, Hindu youth group teacher at an Indian cultural school in St. Louis, was able to experience holidays of various religions growing up in the cosmopolitan city of Mumbai, India.

During her childhood in Mumbai, she attended midnight Mass on Christmas Eve to partake in the festivities. Upon arriving in the U.S., she picked up aspects of Christmas culture and borrowed a few traditions.

These traditions included setting up a Christmas tree, a practice she was not aware of during her childhood.

Sathees set up a Christmas tree and reflected on memories of giving gifts to family this year. While celebrating Christmas, she found ways to maintain her own way of life as a Hindu.

“Keep your customs and traditions alive, but at the same time, celebrate the happiness of others,” Sathees said.

Sathees said she understands the essence of Christmas by comparing the birth of a Hindu god, Krishna, to the birth of Jesus to understand the happiness of those who celebrate religiously.

She said giving into commercialization is the responsibility of the individual as the stores have to commercialize to further sales and pay employees.

However, the gifting aspect of commercialization, Sathees said, is a positive aspect of the holiday season.

“The buying of the gifts is so very thoughtful,” Sathees said. “There’s so much thought and love that goes into it. So, I don’t know if I would call it commercialization.”

The holiday festivities are different for Sophia Marciano, junior, who is a practicing Catholic. She celebrates the traditional and religious aspects of Christmas.

Marciano attends Mass during the Advent season and on Christmas day, which is followed by gift exchanges with family and friends. Advent is defined as the season in which many denominations of Christianity, including Catholics, commemorate and prepare for the nativity of Christ. Traditionally, the Advent season begins Nov. 29 and ends Dec. 24.

Marciano uses the Christmas season to celebrate the birth of Jesus and her faith with her family.

“Not only has my family always kept this holiday religious, but through the years, I have developed my own personal faith and would celebrate it religiously regardless,” Marciano said.

Marciano’s family decorates their home with a nativity scene as a symbol of their beliefs. For her family, the nativity scene serves as a religious decoration and reminder of the birth of Jesus.

Marciano said her family has a different take on the culture of giving gifts.

“While we believe we shouldn’t be greedy and forget about the true meaning of Christmas, giving and receiving gifts are a big part in celebrating the joy and gratefulness of the holiday season,” Marciano said.

Kayley Lory, sophomore, practices Judaism, but enjoys celebrating the cultural aspects rather than the religious aspects of Christmas.

Normally, her family celebrates in the morning by opening presents and in the evening by going out to dinner at an Asian restaurant, because Lory said those are the only ones open.

Lory said it is permitted to celebrate the traditional or cultural aspects of Christmas, according to Judaism.

Lory said the popularization of Christmas has altered many aspects of the traditional Christmas.

“I don’t think the way people celebrate it is a bad thing because now it’s just gift giving and treating others with kindness,” Lory said. “I do see how it could be a bad thing because everything revolves around it because of how popularized it is.”

Lory said it is unfair that holidays of other religions are not given days off for employees of restaurants.

“I do think it’s unfair that important holidays in other religions aren’t given a day off for the workers who celebrate those because they’re not as popular or not a lot of people celebrate it,” Lory said. Rev. Christopher Martin, pastor at St. Clare of Assisi Catholic Church, said if Christians devoted a fraction of the money spent on Christmas presents, it could potentially open up the possibility to give food and water to every person in need for one year.

“That would reflect the true spirit of Christmas more than Black Friday sales or the latest PlayStation,” Martin said.

He said in order to ease away from the popularization of Christmas and bring more joy in the season, a method would be to imagine what the holiday would be like without materialistic objects.

Martin said it is good that people gather together to spread joy even if they are not gathering for religious intent. He said regardless of the intent, the Christmas spirit still continues.

“There is always a natural good to people gathering together and sharing joy and goodness,” Martin said. “In this regard, everyday should have a bit of the same spirit of Christmas in it.”