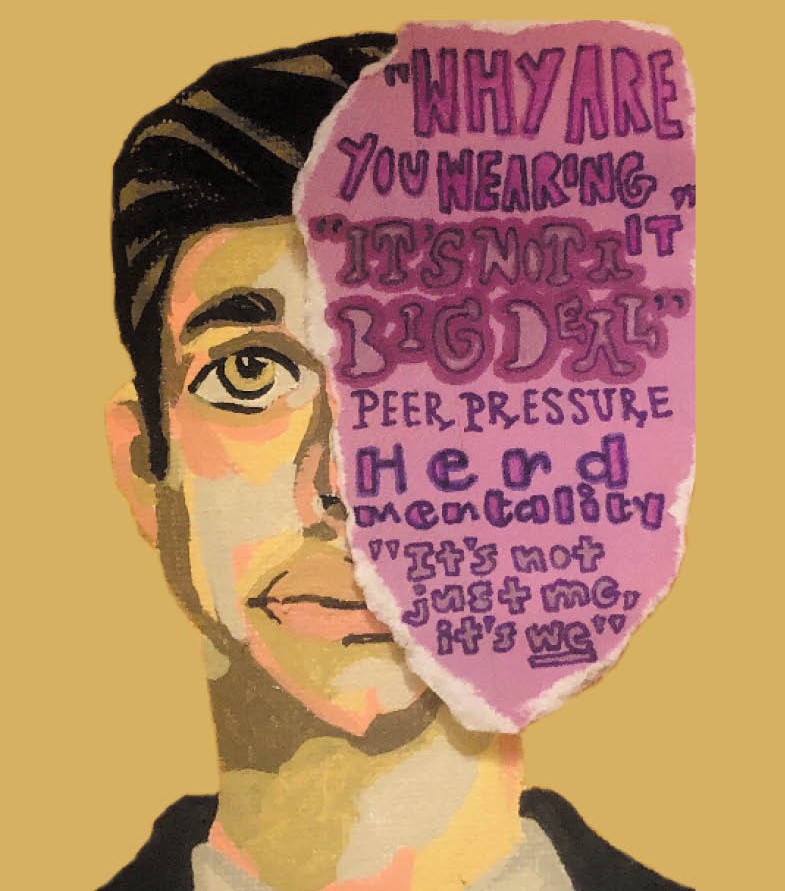 Students reflect on feeling peer pressure to both stay safe and follow the COVID-19 guidelines as well as being socially accepted and interacting in the high school space.

Peer Pressure In An Isolated World

Family gatherings are monthly occurrences for Sri Varatharaj, sophomore, that is, before the COVID-19 pandemic. But for a family filled with intense care specialists and doctors, their regular gatherings had been postponed multiple times before the family felt comfortable enough to meet up.

Even so, the rules were strict: it was an air-hug and air-five only zone. However, when everyone began to remove their masks for dinner, Varatharaj couldn’t help but feel uncomfortable and conflicted.

Varatharaj found herself eating dinner in her respective corner, subconsciously holding her breath and feeling isolated amongst her closest family and friends.

She realized making “simple” decisions to attend social events in a COVID-19 world has placed her in the crossroads of fear from the virus and fear from peer pressure.

“I am scared of the virus,” Varatharaj said. “I don’t want to miss out when my friends or family are inviting me to spend time together or celebrate birthdays and holidays. I know the virus is dangerous, but it’s easy to forget at the moment.”

I am scared of the virus. I don’t want to miss out when my friends or family are inviting me to spend time together or celebrate birthdays and holidays. I know the virus is dangerous, but it’s easy to forget at the moment.”

Varatharaj said it’s difficult to resist small gatherings and activities, especially when a majority of her friends push her to; however, her main source of peer pressure is not via video call or messaging. It is on every social media platform.

“When I go on Instagram or Snapchat, my feed is full of posts discouraging people from hanging out with friends or taking masks off for pictures,” Varatharaj said. “While I know they aren’t directly addressing me, the pressure is subtle, but definitely present.”

Sully Anselmo, senior, understands the pressure Varatharaj feels, but he considers following the guidelines critical to the community’s safety.

Since the stay-at-home order last spring, Anselmo has interacted with only two family friends maskless. He said he makes sure to follow the safety guidelines even in counties without a mask mandate.

Anselmo said he was angry to see other students partying and hanging out without masks on Halloween. He said other teenagers are justified in being angry because people are sacrificing their social life for safety reasons.

However, Anselmo recognizes there is pressure from both sides, one that stresses following the guidelines and the one that is more lenient.

“A lot of teenagers are nonpartisan about the guidelines,” Anselmo said. “I see people wait for certain cues from others to see what they should do themselves. No one wants to be the first person to take their mask off.”

AJ Ohley, Class of 2020, is a freshman at the University of Missouri-Columbia (Mizzou) and resonates with Anselmo’s understanding of peer pressure.

Starting college during this time has been a big adjustment for Ohley, as he cannot use the traditional norms of in-person conversation to approach his classmates, and he has to develop a safe routine living on campus.

The only people he hangs out with maskless and not socially distant are his roommates.

Mizzou is close to Columbia’s downtown party scene, where police officers have been present to cut down on crowds and parties. Ohley said the precautions Mizzou has taken limit his freshman experience, but they are important.

“It is a double-edged sword,” Ohley said. “As a college freshman, there is an expectation to socialize and party, and the institution condones it. They are trying the best they can to mitigate the spread, but it is hard to enforce at the collegiate level.”

It is a double-edged sword. As a college freshman, there is an expectation to socialize and party, and the institution condones it. They are trying the best they can to mitigate the spread, but it is hard to enforce at the collegiate level.”

Varatharaj, Anselmo and Ohley express there is a societal pressure to adhere to what a collective group is doing.

Joshua Hyde, sociology teacher, said the most critical socialization agents are parents, peers, media, school and religion. In the wake of a pandemic, the behavior that parents and peers model directly impacts how one behaves, a concept known as herd mentality.

“It is possible to escape peer pressure, but it can be very difficult,” Hyde said. “The difficulty lies in the individual and the amount of pressure. As the behavior becomes more of a norm or acceptable with greater numbers in society, it is easier to justify going against the grain.”

Hyde said the pandemic may go way over time, but the length and severity of it is dictated by human behavior and the ability to mitigate it.

“As humans, one of our greatest strengths is the ability to adapt, however, we don’t always adapt at once as a collective whole,” Hyde said. “People react to changes in norms differently and that can lead to frustration, outrage and fear.”

As humans, one of our greatest strengths is the ability to adapt, however, we don’t always adapt at once as a collective whole. People react to changes in norms differently and that can lead to frustration, outrage and fear.”

Katelyn Schaefer, clinical therapist with West County Psychological Associates corroborates Hyde’s viewpoint on the impact of media. She said many people find it easier to pressure their peers from behind a phone or computer screen than in person, challenging teenagers to hold themselves more accountable than before.

In addition to the primarily online communications, Schaefer said negative peer pressure could be considered more dangerous as emotions and stress levels are higher than usual.

“During stressful times we are more easily swayed to act out of character,” Schaefer said. “When we are in difficult emotional and social situations, we can act in ways we otherwise wouldn’t.”

Bunderson said students face this pressure more than adults do, but she experienced her own peer pressure to remove her mask while traveling in another state for volunteer work.

Despite the negative connotation associated with peer pressure, Bunderson has observed peer pressure influencing others to follow COVID-19 guidelines and be more self cognizant.

Selvidge Principal Michael Anselmo, parent of Sully, sees the topic through a parental and an administrative perspective.

Michael said the family unit is the most vital system of communication and enforcement, and his kids follow the guidelines because he and his wife modeled that behavior for them.

“We use our family as a poker chip,” Michael said. “If my kids want to see their grandparents, they have been told they can’t hang out in large groups and be maskless.”

Although the Anselmos stress following the health guidelines, Michael knows his kids don’t act the same way around him as they do with their friends. He said he takes that with a grain of salt and tries to encourage them to make good choices even if he’s not around.

“I’ve seen my sons go into groups of people wearing a mask and get poked at,” Michael said. “But, they are strong enough to know what the right thing to do is.”

RSD Executive Director of Student Services Dr. Terry Harris shares Michael’s sentiments. He stresses the viewpoint of a collective mentality, but he said the RSD community has to think of the individual’s safety as well as everyone else.

“Humans are social beings, and young people miss that feeling,” Dr. Harris said. “However, if we all do our part, we can get on the right track.”

Humans are social beings, and young people miss that feeling. However, if we all do our part, we can get on the right track.”

“Not wearing a mask or socially distancing is a selfish mindset,” Dr. Harris said. “This pandemic has put us in a position to be reminded of our compassion as humans and our empathy towards others.”

“We will struggle to overcome this pandemic if people don’t follow the rules,” Dr. Harris said. “This is not just about me. It is about we.”