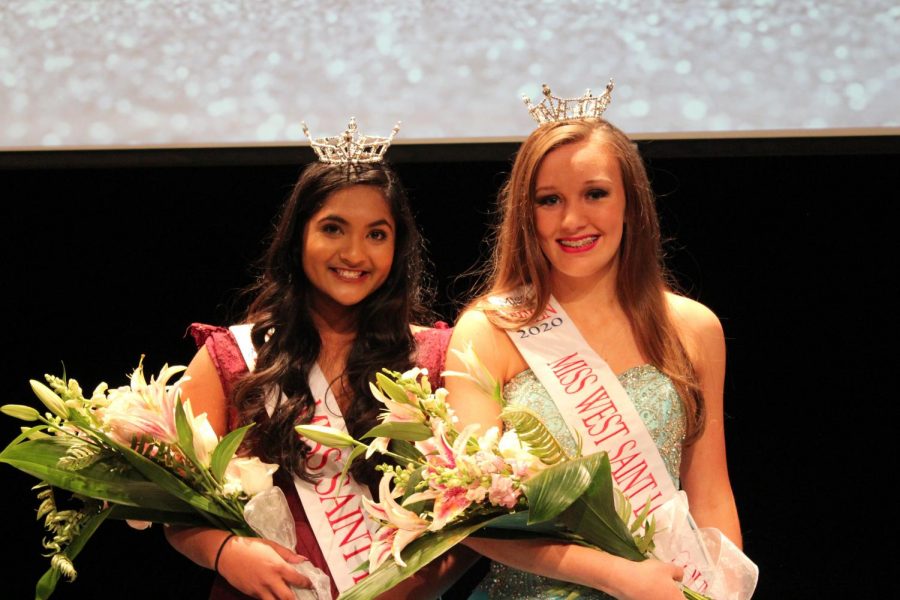 After making a school presentation on common sense gun legislation, few would expect to be approached about joining a beauty pageant. But for Sarah George, junior, that’s exactly what happened.

“That’s why it was such a shock that I won,” George said.

During her sophomore year, George presented to faculty members as part of her ALARP II final. In attendance was Paula Ake, guidance counselor, who was “extremely impressed” by Sarah’s speaking abilities.

“It wasn’t the content of the presentation, it was the delivery,” Ake said. “Her being very well spoken, and clearly very intelligent. Just her overall outward presentation and speaking ability is very much aligned with what the Miss America organization stands for.”

Ake originally encouraged both Sarah and her sister Susan George, junior, to sign up for the Miss St. Louis Outstanding Teen pageant. After Sarah decided to give it a try, Ake gave her the paperwork to sign up. Aside from some advice from Ake, Sarah was on her own until the pageant in December.

“When she won, I was jumping up and down backstage,” Ake said.

Ake said Sarah’s “genuine sense of self” set her apart from other girls who were far more experienced in pageants. She explained the Miss America organization has been moving toward rewarding girls who don’t try to fit a mold and remain true to themselves.

When she won, I was jumping up and down backstage,”

“Seeing someone like her jump in and just be Sarah and be successful is super exciting,” Ake said. “That’s why I thought she would be a perfect fit.”

George said she didn’t practice or prepare before the pageant. Her talent was an original oratory, but instead of writing a new speech, she reused one she had previously written for Speech and Debate.

She didn’t buy a new evening gown either, opting to wear a dress previously purchased for a wedding. The other parts of the competition were learned on the day of, or depended solely on the participants’ personality.

“It wasn’t because I didn’t want to put effort into it,” George said. “It was because I had finals the entire week, so it was the last thing on my mind. My mom told me ‘pageant comes second, finals are first.’ I definitely took that to heart.”

George said she felt intimidated by the thought of competing in a pageant. She understood many girls devote a lot more time, and that Indian American’s are not very prevalent in pageant culture.

In addition to her appearance, George said her talent was also unique compared to the other competitors. Her speaking skills come from her speech and debate background and were what originally caused her to be invited to the pageant.

Susan watched her sister compete with the rest of their family. She said the announcement that Sarah had won came as a surprise.

“It was mind blowing because I didn’t expect that and neither did our entire family,” Susan said.

Susan said although her family had initial doubts about the pageants, Sarah’s success has caused them to become more open minded about trying new experiences. Their family hopes Sarah will find success at the State level, the Miss Missouri Outstanding Teen pageant, which will take place June 12 in Mexico, Missouri.

As a title holder, Sarah must now develop a social initiative and a public platform, as well as raise money for the Children’s Miracle Network. Sarah plans for her platform to educate young Asian Americans on their voting rights and encourage them to act on issues that matter to them.

“It definitely has changed my life,” Sarah said. “I’m not going to even deny that because I’ve never been in this world and I just got dropped into it. The beauty pageant world is revolutionary.”