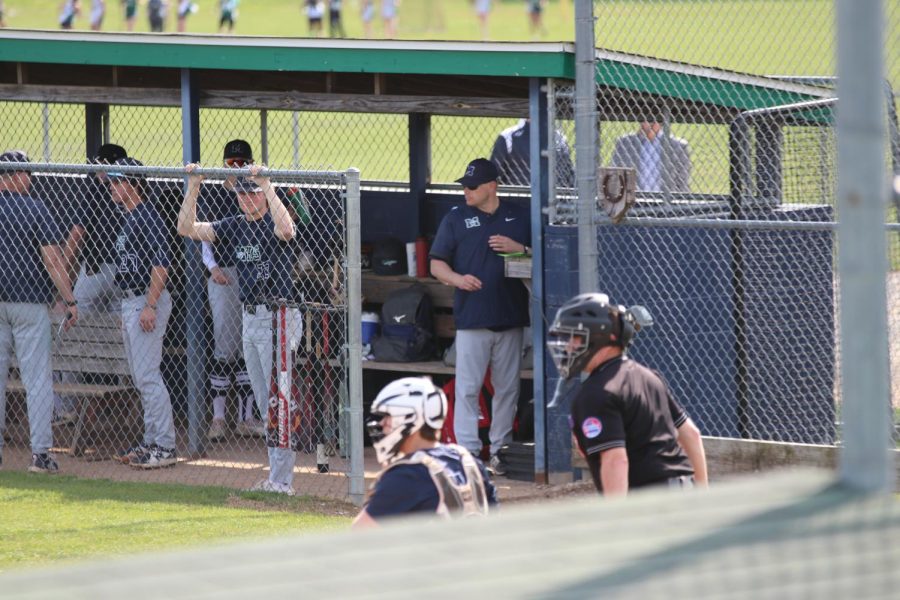 Pitching coach Adam Starling watches the game against Lindbergh on Thursday April 21, and take notes of the team's performance. This is his last year of coaching befire he becomes the new actvities director.

After almost 18 years of coaching, Adam Starling, social studies teacher, is stepping down to become the new Activities Director (AD).

“I feel as if my leadership was capped in my current role of only teaching economics and coaching in two different sports,” Starling said. “I feel that I can help lift up some of the programs and help push them forward.”

As the new AD, Starling will be in charge of all the activities and athletics that happen at MHS. His roles will range from hiring coaches to having athlete leadership groups.

However, with his new role, he will be unable to continue coaching as the assistant varsity baseball coach and the head varsity softball coach.

Coaching is something Starling said he enjoys because of the relationships he can make with the players and their families as well as what he can teach them.

“I love teaching the life lessons that go along with both of those sports,” Starling said.

Giving up coaching will be difficult, Starling said, but he hopes he will be able to make a difference in the lives of all the student athletes instead of only baseball and softball.

“It’s hard to give up coaching because I’ve been doing that for so long,” Starling said. “But the trade off to not being able to coach anymore is now to have more of an imprint.”

Zachary Thelen, senior, has known Starling for 10 years as he and his brothers’ baseball coach.

During those years, Thelen has noticed Starling’s coaching style is intellectual, which Thelen said has improved his game.

“He’ll tell me things I never even thought of; it broadens my perspective of the game,” Thelen said.

Thelen said Starling’s previous involvement at school as a coach and teacher and his ability to schedule and direct well makes him a good fit for the AD position.

Thelen is still sad to see him go.

“It’s sad when I come back, he won’t be necessarily coaching,” Thelen said. “But I think it’s also cool he’s moving into a position that’s going to help him out.”

Meyer said what sticks out to him most about Starling’s coaching is his loyalty to MHS and how Starling seems to make situations better, which he said Starling will continue to do in his new role.

“I just think at the end of the day, when you judge somebody, you think ‘did you make the situation better or worse?’,” Meyer said. “He’s always made it better, and I really appreciate that.”

Meyer will continue to be the assistant coach for the softball team, and the new coach to replace Starling is still being decided.

“I wish him the best of luck and he’ll be sorely missed in the baseball program and softball program,” Meyer said. “But I’m happy for him because it’s exciting.”