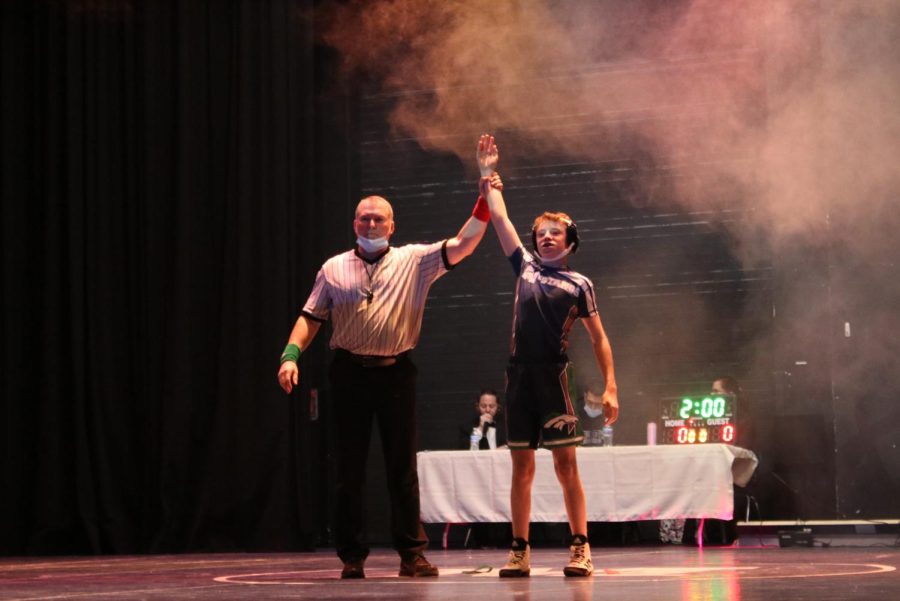 The boys wrestling senior night event was held in the MHS theater Thursday, Jan. 6, as a part of what Sean Torgoley, girls wrestling coach, said he hopes will become a long standing tradition. "It just feels more special in the theater," Torgoley said. Aiden Strobel, freshman, was one of the wrestlers who one his match against Eureka by forfeit that evening as he was the only member of his weight class.

Smoke filled the air, illuminated by the pink and yellow lights as the boys wrestling team members were introduced on their senior night, Thursday, Jan. 6.

Spectators’ applause filled the room, but not the gym. To make senior night more of an exciting event, the face-off against Eureka was held in the theater.

“One of the best experiences I went through in Marquette history if I’m being honest,” James Jones, senior, said. “Once I saw the lights go off, I was just like ‘oh, it feels kind of like college wrestling’.”

Both the girls and boys wrestling teams took victories over Eureka, and though it was supposed to be senior night for both teams, the girls team did not have any seniors.

The tradition of hosting senior night in the theater began last season. In years past, the celebration would be held in the small gym, though Jones said he prefers the setup for the celebratory evening to be in the theater.

“It was kind of nice just having that theme and everything,” Jones said. “It was a beautiful view.”

Sean Torgoley, girls varsity wrestling coach, said he also prefers holding matches in the theater and hopes it becomes a long-lasting tradition for senior night. He said it makes the night feel more special because of the lights, stadium seating and other aspects of the room.

“I think it makes the wrestlers a little bit more nervous. It makes them feel a little more in the spotlight,” Torgoley said. “They enjoyed it though. Afterwards they all talked about how cool it was.”

Though he said the theater is a nicer venue to wrestle in, Torgoley understands that all matches cannot be held there.

A traditional setup would have two matches running side-by-side in the gym. However, due to limited space in the theater, only one wrestling mat can be set up on the stage. Torgoley said that this change did result in some benefits as it allowed for full attention on the single match occurring.

“You could feel the excitement buzzing from the wrestlers,” Torgoley said. “Both Eureka and Marquette sides were amped and ready to go.”

In addition to the excitement, Maddy Barton, junior, also said having the attention solely on one match was nerve racking.

Though she prefers the gym because it is what she’s used to, Barton said she can’t deny that the theater is a unique environment. While at other schools there is often one spotlight on the match, she said it was nice to have an environment with so many lights shining on the mat.

“You’re actually pretty much on a stage,” Barton said. “Everybody was just watching you.”

Barton said the girls team will have a large number of seniors next season, she looks forward to that night in the theater.