The Rise Of MHS Girls Wrestling 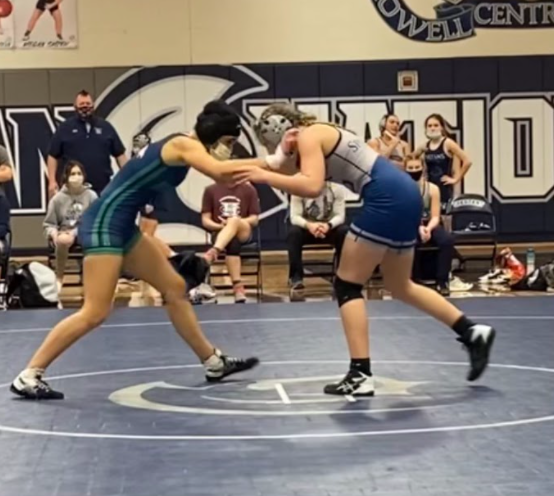 Rebecca Strong in a match with a girl wrestler from Francis Howell Central, in last year tournaments. Since the wrestling practice begin this year, there has been a large growth of new girls joining the girls wrestling team.

Rebecca Strong, junior, said that one of the best decisions of her life has been to join the girls wrestling team.

“I’ve always been pretty strong since I was little, and my friend came up to me and she was like you should join wrestling,” Strong said.

When Strong joined her freshman year, there were only four girls on the team. Now there are 15.

“Before, no one really knew that we wrestled, but now it’s growing and people are acknowledging this,” Strong said.

The rise of members on the team could trace back to the increased awareness among girls of the sport, which the team members frequently talk about and post on social media. Strong said she would let other girls know about the sport and how it benefited her in areas like strength and confidence.

Although there is an increased interest in girls wrestling, Strong said the boy’s team still gets more attention because people think they have more action during games. Strong said the action of the matches usually depends on skill and the athlete’s experience, and not specifically on their gender.

Maddy Barton, junior, who has been wrestling for three years, said that at the beginning of this year, the girls from the previous years hung up posters in the bathrooms and talked about the sport frequently. Emails were also sent out to let the freshman girls know about the team and spread awareness.

“It makes me really happy that there are more girls that wanna try the sport since we tried our best to promote it this year,” Barton said.

Sean Torgoley, girls wrestling coach, has been working with the girls wrestling team for about two years. He said wrestling is the hardest high school sport a student can do because it requires a great amount of physical and mental toughness, and that there are certain stigmas and stereotypes around it that keep girls from joining.

He said he hopes even more girls in the coming years will consider trying out for the sport.

With good progress being made, Torgoley said this might be the first year where the girls wrestling team might get some first places in tournaments.

“This year is going to be huge for them,” Torgoley said. “I’m excited for them to leave their mark in Marquette history.”