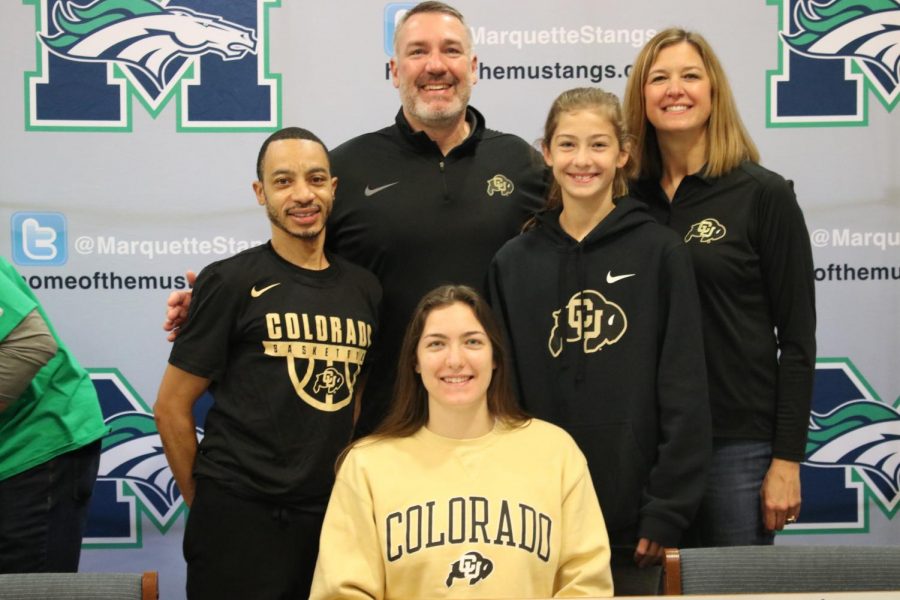 Ally Fitzgerald said it was a dream come true to sign for University of Colorado Boulder to continue her basketball career.

Senior basketball forward, Ally Fitzgerald, achieved her dream of committing to play Division I basketball after signing to the University of Colorado Boulder.

“If you have a dream, make sure you follow it,” Ally said. “I had a dream to play Division I basketball, and I never stopped working until I got there. Continue to put in the work and the results will show.”

“Being 6’3″ she can most definitely score inside and is a dominating physical presence around the rim, but also can run the floor and handle the ball like a guard,” Meador said. “She has also increased her range in shooting to include the 3-point shot.”

Ally’s unselfishness, Meador said, has made her a better player at MHS and outside of school.

“Ally is one of the most talented players Marquette has had in recent years. Her ability to put others above her own personal stats make her a very unique kid to coach and one that will not easily be replaced,” Meador said.

Meador said the basketball staff is proud and happy for Ally and believes she will be able to make an immediate impact at Boulder.

“I am proud and happy that all her hard work and sacrifice over the past four years have paid off,” Matt Fitzgerald, Ally’s dad, said.

He said Ally’s determination and work ethic are what put her in the position to earn an athletic scholarship. Last year, Boulder finished sixth in the Pac-12 conference but they currently sit at second place.

“She has never just relied on her natural abilities,” Matt said. “She is a great team player. Ally does things that aren’t always noticed, like helping back on defense, sprinting back in transition, diving for loose balls and cheering for teammates on the bench are qualities Ally has that are needed for a successful team.”

Ally said Boulder’s community is the right fit for her, and that the team, coaches and athletic programs have helped her along her path to commitment because of all their support.

“The support from the actual Boulder community and the high academic and athletic standards made me feel like it was best for me,” Ally said. “I knew they would take care of me and have my best interests for the future.”

After her official visit in September when she was able to go to a Boulder football game and meet her future teammates, Ally then verbally committed to the school at the end of October.

Now ready to just enjoy the rest of her senior year, Ally said she is happy to have signed and have everything set in stone.

“It’s exciting. It just hasn’t hit me yet. It’s a really amazing opportunity to be able to go to a high academic institution and continue to play basketball,” Ally said.