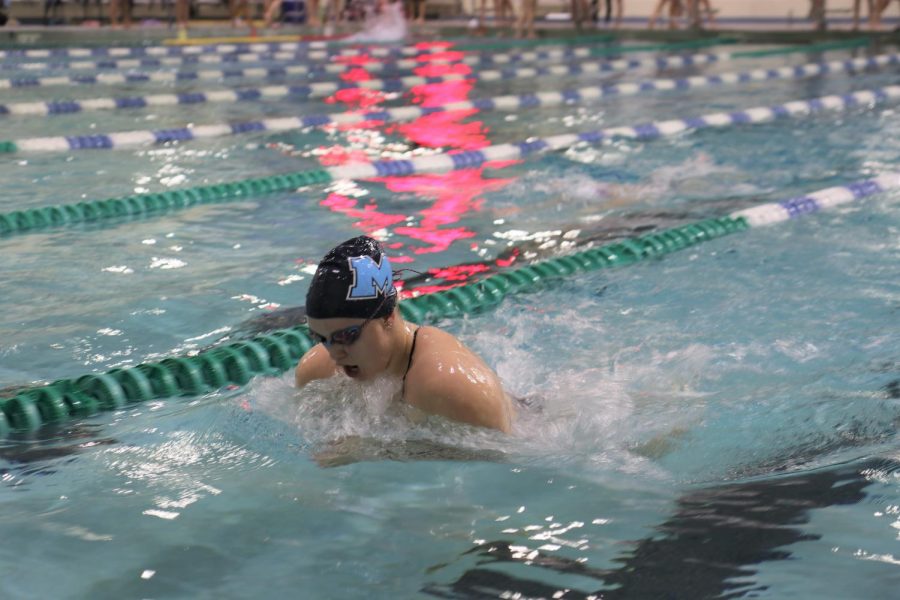 Abbey Bolt, senior, swims during a dual meet against the Eureka Wildcats. Marquette would win that meet 129-59, extending their undefeated regular season streak of six years.

At the conclusion of the 400 yard free relay, spectators and athletes stared expectantly towards the scoreboard at St. Peters Rec-Plex knowing the outcome of the previous relay would determine which team would end up as State champions.

When the scoreboard updated, MHS athletes rejoiced when they realized they had successfully defended their State title by a mere five points over Conference rival Kirkwood.

Haley Hume, junior said the competition for the team title was far greater this year compared to last year when MHS won by a far greater margin.

“Going into the last couple of events this year, we knew we would have to perform our very best in order to win,” Hume said.

Hume said a big factor in the win was the contributions from the athletes who don’t swim year round. She said last year the team was carried by many of their elite club swimmers, but this year many of the non-club athletes played a big role in the victory.

Although Hume said the team is losing many talented athletes to graduation, the seniors on the team helped to set a tradition of excellence in the program.

“The seniors this year are some of my best friends and I look up to them in swimming and life, and they definitely have shown us how to compete and bring it every meet,” Hume said.

Maya Esparza, sophomore, said this year’s State victory felt more special to her because of her role in the win.

“Last year almost didn’t seem real, but to be a part of it this year was amazing because I look up to all these girls everyday and to know I contributed and wasn’t just watching is awesome,” Esparza said.

Esparza said the team was nervous after the 400 meter free relay because a disqualification had been announced, but it was still unknown which team had been disqualified. Ultimately, the disqualification was not on the Mustangs and didn’t affect their team score.

Esparza also said the team mentality throughout the season was different because of how many talented seniors graduated from the team.

“This year, every dual meet we went to we were excited and knew we had to compete to win,” Esparza said. “And then we realized from our dual meet success that we were still one of the best teams in the state.”

Even though Esparza said the obstacles of winning another championship are great, she knows the team is up for the challenge.

“Some teams knowing the chances of winning state are slimmer next year would slack off, but I know our team will just work harder to get back to where we were,” Esparza said.

Joe Schoedel, head swim and dive coach, said this year’s win was more impressive because of how many athletes improved drastically in the off-season.

“I told the girls last year after State last year, we had a chance to be good next year but we all have to get better,” Schoedel said.

Schoedel also said winning back-to-back State titles speaks to the positive culture of the team because the only other team across all MHS sports to do so was the girls swim and dive teams from 1999 and 2000.

“I’ve always said we’re as good as we are because of the culture the girls have established in our program of being the best every year,” Schoedel said. “If you’re going to do that year after year, it’s not because of one group of girls.”