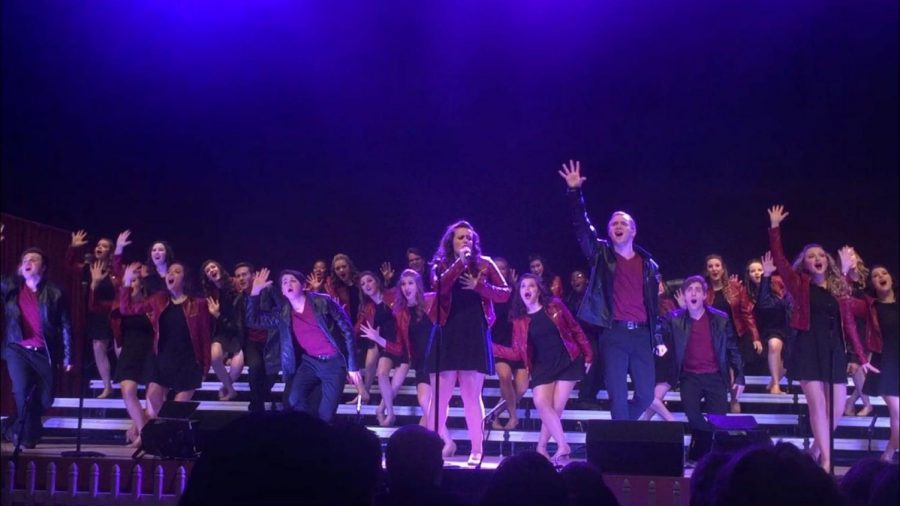 The group performs one of their sing and dance numbers at their competition at Danville High School. The group moved on into finals and ultimately earned second place with their routine. "I can't wait to see where we go from here," Cassidy Barger, junior, said. "We have already improved so much, and I know we are going to continue working harder to become better and better."

Center Stage earned second place and Best Band this past weekend at the Danville Midwest Classic Competition in Illinois.

Cassidy Barger, junior, and the group were at the competition all day Saturday, Feb. 8, as they competed at both Prelims and Finals.

“I love this group because no matter what place we get, we all jump up screaming and cheering because we know how great we did on the stage and how that is the only thing that matters to us,” Cassidy Barger, junior, said.  “We were all sitting as a group at 12:30 at night when our name was called for second place.”

Barger said they have been working on their routine since October and have had extra practices over breaks and after school in addition to their class time. They first learned the vocals and choreography separately, then slowly incorporated both parts.

“We travel a lot for competitions, which is so much fun because most of the time we get to ride on a charter bus, but when we have a show choir competition it does take up a large part of our weekend,” Barger said. “The saying ‘sorry I can’t I have show choir’ is used by everyone in the show choir community to explain how busy we are.”

The group’s show is about 15 minutes and includes five songs. The first two numbers are sing and dance, the third is a ballad where they only sing, the fourth is a transitional number, where one person sings and the rest must change in less than 50 seconds to return to the stage, and the fifth is one last sing and dance routine.

Malea Baldwin, senior, has been impressed by the group’s performances, especially with how difficult the routine is.

“It is a long number where you are singing and dancing,” Baldwin said. “It is a lot of fun but also really stressful and challenging to make it look effortless and easy.”

This past weekend, the group had added stress and nerves while they were backstage preparing to perform because they had to go under lockdown for about 20 minutes due to an active shooting just blocks away from the high school. A man riding his bicycle was shot by a man in a truck.

“I always get nervous before performing, but this past weekend I was even more scared because of the lockdown,” Baldwin said. “We ended up having to all hide backstage. It was weird and scary, but we ended up doing really well still, and I am proud that we didn’t let the chaos mess with our final performance.”

In addition to this odd challenge, the group has also had to face problems with losing practice time. The majority of the season takes place over winter, causing conflicts with snow days and illnesses, but the group doesn’t let this stop them.

“The biggest challenge is always time, injury and illness,” Jason Winter, show choir teacher, said. “It is important to get as much rehearsal time as possible, and the students actually asked for additional rehearsals to overcome the challenges. This group sees adversity as a challenge they can overcome and they do it daily.”

Winter said the team has been very happy not only with their success in their past competitions, but with the success of others.

“Seeing [the kids] give a standing ovation to the Grand Champions this past weekend was my favorite moment,” Winter said. “Our kids work so hard and the scores were honestly so close, but they are also willing to celebrate other people’s success. Having competitive drive and humility is such a rare thing.”

The group has three more competitions, one of which is their first-ever national competition, which is taking place in St. Louis this year in early April.

“My number one goal is to continue to improve our vocals,” Winter said. “We are already scoring consistently high but the more connected we are to our show the better our overall performance becomes. If I’m being honest though, they were absolutely brilliant this weekend in finals.”