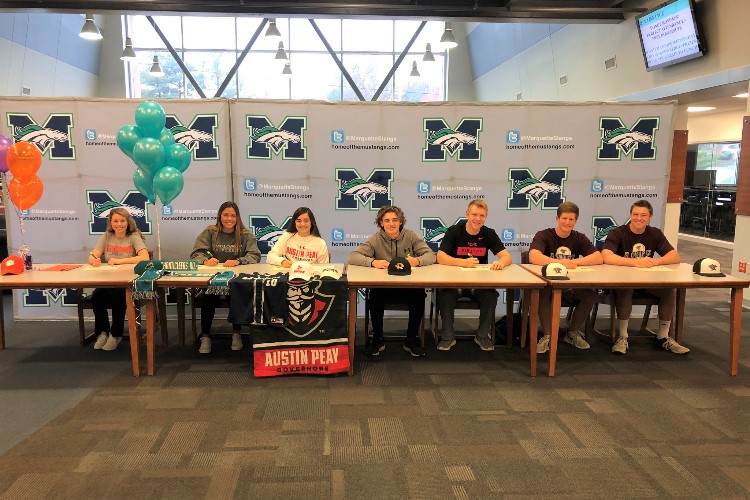 Seniors announced their commitments to different colleges on the first national signing day of the year, Nov. 23. Four incoming athletes signed to state schools and three signed to junior colleges.

Connor Throneberry, junior, verbally committed to Penn State for baseball as a sophomore which puts him on the younger end of athletes who commit to a school.

“With all the juniors and seniors worrying about college, I don’t because I already know where I’m going,” Throneberry said. “But since I picked where I was going as a sophomore in high school, I probably wasn’t the most educated about colleges at that point.”

Since his freshman year, Throneberry has travelled around the country to tournaments, games and showcases with his club team the MidSouth Prospects.

“In the summer, I’m not even home a quarter of the time because I’m playing games everywhere in a bunch of different states,” Throneberry said.

With all of the different aspects of modern recruiting, many athletes are left wondering what aspects are most important in a college recruiting process.

Throneberry said he values the school season in the spring as much as the club season in the summer. However, he said colleges value the summer season more because coaches can watch all the best players in the same place at one time.

“My coaches would always talk to the college coaches and give a good word about me, but they would still be honest about my strengths and weaknesses,” Throneberry said.

Jenna Gruender, junior, is currently being recruited by multiple schools for volleyball and is uncommitted. Due to the National Collegiate Athletic Association rules, she cannot disclose which schools she’s talking with.

Gruender said she’s taking things slowly and making sure she doesn’t make a decision too quickly.

She said in an age where immediate success is desired, some athletes overlook basic things such as social media and grades which can tell colleges what type of attitude and work ethic an athlete may have.

“Having good grades makes you stand out among other recruits for a spot on the team,” Gruender said. “You also have to be careful with how you present yourself online because even if one person doesn’t like what you post, it’s unlikely you’ll be on the team.”

Michael Stewart, head football coach, said he tries to give his athletes as much exposure as possible by allowing all college coaches the opportunity to talk to the team.

“Following the season, in the winter, there’s a revolving door of college coaches who want to speak to our kids,” Stewart said.

Stewart said when college coaches talk to the athletes, they emphasize grades above all else in the recruiting process.

“The first thing a coach will ask when he comes through the doors to ask about a kid are his grades,” Stewart said. “They weed a kid out quickly or move a kid up the ladder and help them receive academic assistance.”

Although most athletes dream of playing Division I in college, Stewart said this is often unrealistic.

“I have to be as realistic as possible because we don’t have many Division I athletes in our school,” Stewart said. “I have to be realistic with them to ensure they get the most financial aid and scholarships possible.”

Stewart said some athletes feel pressure to be on the field to get more exposure, but college coaches are good at picking out the players with the most potential even if they don’t have the best statistics or most time on the field.

Stewart also said players have a higher probability of being recruited if they take charge of the process by attending camps and showcases in the offseason, but Stewart said the biggest thing to remember is that college sports are a full-time job which isn’t always for everyone.