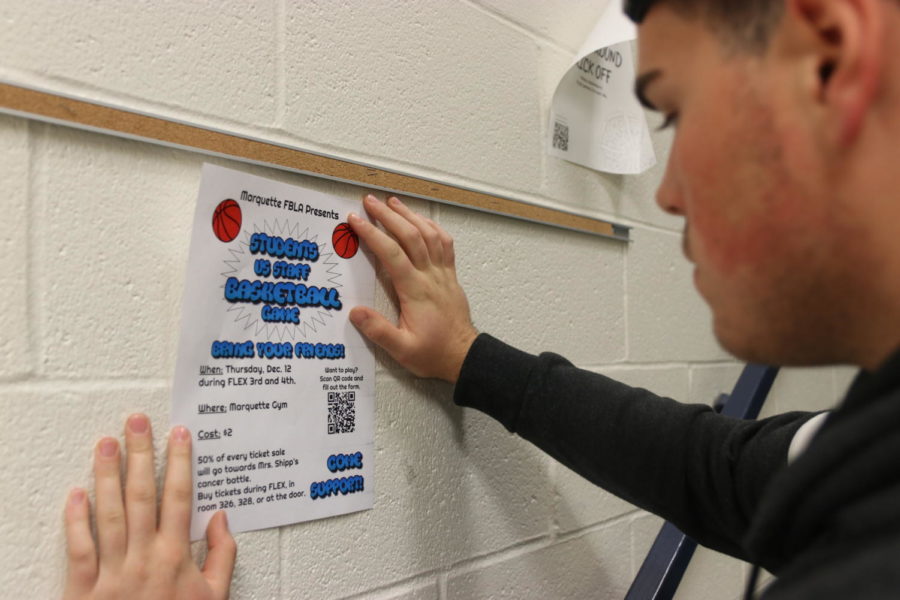 Anthony Cova, senior, hangs up a poster for the upcoming student-versus-teacher basketball fundraiser in the main stairwell. In addition to creating posters, Cova has organized teams of students who will help create a commercial, sell tickets, set-up and clean the event and more.

The MHS chapter of Future Business Leaders of America (FBLA) are hoping for a slam dunk in the coming weeks, as they begin to organize a student-versus-teacher basketball fundraiser during the third and fourth blocks of Flex Time Dec. 12.

Tickets go on sale this week for $2. Half of the proceeds will go toward FBLA’s trip to the State competition at Saint Louis University, while the other half will be donated to language arts teacher Jennifer Shipp who is currently fighting cancer for the fourth time.

Senior Anthony Cova, a first year FBLA member came up with the fundraiser as part of his club project.

“I thought it would be a really fun event to bring the school together, and then also be able to benefit Mrs. Shipp and FBLA, who also need help,” Cova said.

Any student or teacher can sign up to play at the event, regardless of their basketball experience. Cova said both teams need more players and participants get a free t-shirt.

In previous years, FBLA has raised money for their State trip through business deals with restaurants like the Walnut Grill in Ellisville. However, Cova said that wasn’t always the most profitable or fun for the club.

“We just wanted to try something that would have a better result and maybe be a bit more profitable than getting people to go out and eat,” Cova said.

Tickets may be purchased beforehand in rooms 326 and 328, from participating FBLA members or at the door.

Once Cova had planned out the fundraiser, he went to Crystal Strate, FBLA co-sponsor, who helped him involve other club members. While every member is working on their own competitive event projects, Strate said the amount of preparation for the event soon grew to the point where the fundraiser is now considered a “chapter” project, the largest size project MHS FBLA has ever taken on.

“[Cova] almost planned first and then asked for permission afterwards,” Strate said. “It’s nice knowing that he’s actually the one behind it all. This is all him, so any time a student asks about it, I tell them he’s the one who came up with it.”

Russell Gottlieb, math teacher, experienced Cova’s initiative firsthand when he was asked to play in the game. Despite having not played basketball in a few years, Gotlieb said he agreed to join to support both Cova and Shipp.

“I had him in class last year,” Gottlieb said. “He’s a nice student who came in a lot for help and I got to know him pretty well, so I wanted to help him.”