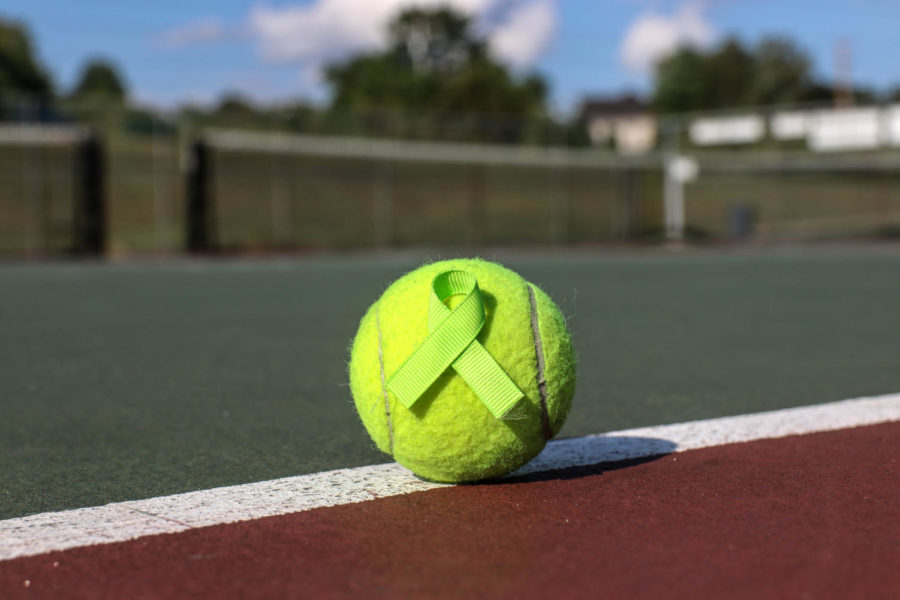 A tennis ball lies on the MHS tennis courts, adorned with a lime green ribbon that represents mental health awareness. Members of the MHS chapter of the National Alliance on Mental Illness (NAMI) distributed the ribbons to teachers, along with flyers informing readers on national suicide prevention month, recognized in September.

The girls tennis team and the MHS chapter of the National Alliance on Mental Illness (NAMI) are hoping to serve an ace this weekend at their co-organized fundraiser, Swing for Change.

For $15, players of all ages and abilities can face members of the girls tennis team from 2-4 p.m on Oct. 5 on the MHS tennis courts.

Each game is a best of three doubles match. In addition to the games, there also will be a raffle and auction with prizes from local businesses. The proceeds will be split between the team and NAMI.

At the head of it all is senior Joycie Chang, who organized the event. As a member of the varsity tennis team, Chang reached out to NAMI and other clubs to help raise awareness of teen mental health issues. NAMI is the nation’s largest grassroots organization that focuses on education and advocacy for mental health issues.

“[NAMI] has the potential to make more of an impact locally in their own community, rather than donating to a huge organization that’s based nationally or internationally,” Chang said.

For Chang, the hardest part of organizing the event was promoting it to both the MHS community and other youth tennis players in the area.

“It’s been stressful organizing the whole thing, but I’m excited to see how it turns out,” Chang said.

Joshua Hyde, head varsity girls tennis coach, said Chang has done 99 percent of all the preparation for the event.

“The only thing I had to do was essentially get stuff approved from the school,” Hyde said.

“I think it’s excellent,” Hyde said. “It demonstrates the character that the MHS students have, not just the tennis players.”

Junior Sheryl Li, vice president of NAMI, helped coordinate the event after Chang reached out to clubs for assistance. Li said NAMI’s half of the proceeds will be donated to the larger St. Louis chapter of the organization, who will use the funds for one of their NAMIWalks charity events. NAMIWalks are 5K walking events that occur year round in all 50 states, aiming to raise awareness and funds for NAMI organizations.