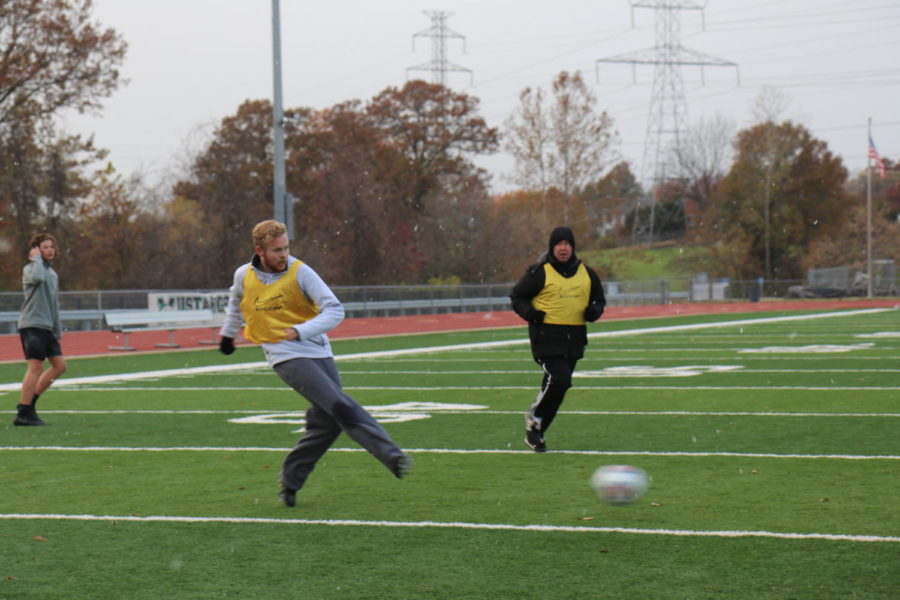 Jacob Quinn, Senior, Takes a shot during a practice following the team’s victory over Oakville.

Following a 2-point victory over Parkway South in the District three championship game, marking the first Conference victory by the Mustangs since 2014, the soccer team has continued their postseason drive with a shutout victory against the Oakville Tigers.

Now with 20 wins and 3 losses, the team is currently ranked 5th in the St. Louis Area among large schools, or schools with a student population above 1,000, according to STLTODAY.com.

Starting defender Sriram Zassenhaus, junior, is impressed with the team’s performance so far.

“We have really gelled together as a team, and with that, our game has been a lot cleaner especially after the Jefferson City game,” Zassenhaus said.

The Mustangs will  take on De Smet Jesuit in the sectionals coming up. The Spartans were the first team to beat MHS and were the only team to shutout the District 3 Champions this season.

The two District Champions are scheduled to meet Saturday, Nov. 10, to see who will move on to the Semifinals.

Zassenhaus, who has scored two goals and 5 assists this season, including a game-winning goal against Francis Howell Central, said  the Mustangs will be the team to move on.

“They got us the first time, and they have a really strong goalie and defense, but we have gotten better at driving this season, and I think we can really get them from behind this time,” Zassenhaus said.

Nicholas Boyles, junior, is also confident in the team’s ability to win.

“It was a tough loss, but I know that we’ll be able to win this time because we’ve improved a lot over the season, like our offense has gotten really solid,” Boyles said.

Boyles, who has three goals, one of which is a game winning goal against Summit, said winning in Districts was a huge confidence booster for the team.

“It’s really cool that we were able to come out and win, especially over Parkway South, [which is] a pretty good team,” Boyles said.

Coach Kenny, varsity head coach, has been very impressed by the team so far, saying that the 20-3 team is one of the most successful teams he has coached.

“It’s been a really good season and I hope it continues like that,” Kenny said.

Kenny credits a lot of the team’s success to the seniors on the team, who he said have helped lead the juniors and sophomores on varsity.

“They’ve been a really solid boost to the team,” Kenny said.

With this, Kenny said  the team can do very well at State.

“If we play at our true potential, like how we played in these recent games, like oakville and Parkway South, I think we have a really solid shot of making it to the final 4 this season.” Kenny Said.